SA actor Jessica Sutton on her role as an all-powerful witch in 'Motherland: Fort Salem' 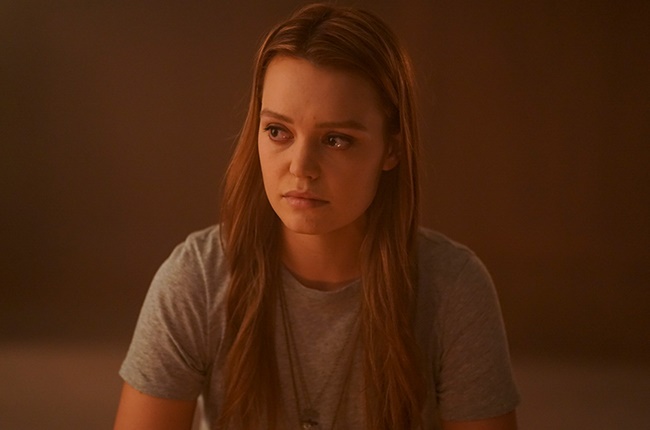 In her breakout role, South African actor Jessica Sutton plays a powerful young witch who enlists in the US Army to fight a terrorist organisation.

Motherland: Fort Salem – available on Showmax – is unlike any supernatural series on television. It is set in an alternate America where witches end their persecution by cutting a deal with the government to fight for the country.

The dystopian series follows three young women, Tally (Sutton), Abigail (Ashley Nicole Williams) and Raelle (Taylor Hickson), who come from different worlds and are thrown together in one unit.

This is the 27-year-old's first lead role, having previously appeared in the Netflix movie The Kissing Booth, Inside Man: Most Wanted and Escape Room.

Her portrayal of Tally has earned her high praise from Channel24's reviewer, Caryn Welby-Solomon.

"Jessica Sutton, who plays Tally, is a South African actor who has starred in The Kissing Booth, and she totally holds her own against her more experienced American counterparts. She plays the role with heart and gentleness, that makes you enjoy the character despite her naivety."

The series has just been renewed by Freeform for a second season.

We spoke to Jessica about her role, where she would like to see her character go in the second season and found out what she misses most about South Africa.

What hooked you to Motherland: Fort Salem initially? Was it the world of the show or the character of Tally specifically?

The first thing I remember reading was the character description, which read: "Tally Craven, a living exclamation mark" and I thought: "That's me!"

This is your first lead role. How did you go about preparing for it, especially with the alternate history element and did you know anything about the Wiccan culture before getting the role?

When it came to any question I had about Tally or the world of Motherland, Eliot Laurence, our brilliant creator and showrunner, was always available to us on set. Just to give you an idea of how remarkable it is to work with him, he gave us each a detailed character bible explaining each arch of every episode. To work with someone who is that meticulous about his vision is an actor's dream.

Regarding the Wiccan culture, I had a great fascination that was sparked by Erica Jong's book Witches, which explores the origin of the symbol of the witch throughout history. It turned out that the year I read that book would be the year I booked Motherland.

Things got weird when, during my first interview with Eliot, he asked me what I thought about witches and magic.

I proceeded to tell him that my idea of the witch had been radically challenged by reading this influential book by Erica Jong. It turned out that this was a book he had read as a boy and had been a great source of inspiration for what would become Motherland: Fort Salem.

What aspect of Tally's story are you most excited for viewers to see?

Probably her waking into her power, as a witch and as a woman. There are several series about witches. What makes Motherland: Fort Salem different from others?

I think the portrayal of the witch is often synonymous with the Halloween cackling crone or the temptress who fornicates with the devil. In Motherland, Eliot portrays the witch as a mythological symbol of power. "Waking the women, waking the witch," has been a phrase I have often used to describe the show at its core.

Can you tell me a bit about the dynamic between Abigail, Raelle, and Tally and how their relationships evolve? What was it like working with your co-stars Ashley Nicole and Taylor Hickson, did you have instant chemistry?

From day one, we forged a sisterhood of such depth. One of the most attractive qualities I find in a person is humour. Those two made me laugh every day. They are both such goofy, beautiful people who have taught me so much. I feel very blessed to have them as friends.

What messages and conversations about female empowerment do you hope the show brings about?

I don't think we can have conversations around the witch without talking about the feminine. The show places emphasis on sex and voice being primary sources for unleashing the power within. I guess that would be a conversation I hope the audience has: How power lies within. Waking the witch, waking the woman, and whatever that means to you.

How did you feel about the reaction to the first season?

I've never experienced anything like the support the fandom showed us. From the messages to the mind-blowing fan art, we are all so moved and so grateful to each person who supported us. It's been such a highlight to have the show released on Showmax so that my family and friends can watch the series too. The show has been renewed for a second season, where would you like to see your character's story go?

I hope we learn more about Tally's power and how she develops and grows into her authentic voice, and maybe a whole new dynamic amongst the trio. I know whatever Eliot Laurence has in store, it's going to blow our minds!

Do you have any favourite TV shows/movies about witches or favourite pop culture witches?

I'm a huge Harry Potter fan and was recently reminded of how brilliant and terrifying The Blair Witch Project is. I really want to do a horror feature next!

Are you permanently based overseas now? What do you miss most about South Africa?

I live the gypsy life. Home is wherever I am. I'm not looking to settle down at this point in my life and am very interested in doing as much travelling as possible and expanding my world. What I miss most about South Africa is my family, friends and the thousand familiarities and idiosyncrasies that make SA home. Our culture, community, diversity, energy, colloquialisms, our great sense of humour!

We live in a world where facts and fiction get blurred
In times of uncertainty you need journalism you can trust. For only R75 per month, you have access to a world of in-depth analyses, investigative journalism, top opinions and a range of features. Journalism strengthens democracy. Invest in the future today.
Subscribe to News24
Related Links
Sandra Oh's character is in a dark place in Season Two of Killing Eve
South African actress, Lex King talks 'American Princess' and what she misses most about home
WATCH | Clarke Peters and Delroy Lindo tell us about their roles in Spike Lee's 'Da 5 Bloods'
Next on Channel24
Regé-Jean Page reveals how his family reacted to those steamy Bridgerton scenes