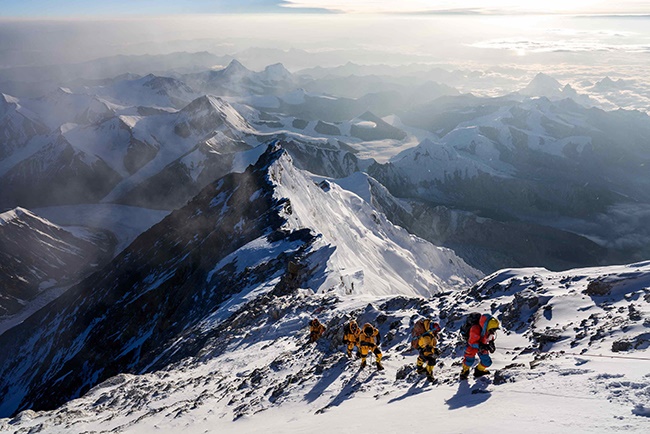 Team members during the expedition to find Sandy Irvines remains on Mt. Everest, in attempt to solve one of the mountains greatest mysteries: who was the first to summit Mt. Everest? (Photo: National Geographic/Matt Irving)

"It is not the mountain we conquer, but ourselves," said George Mallory, an English mountaineer who took part in the first three British expeditions to Mount Everest in the early 1920s.

From next month National Geographic, which has a long and deep-rooted history of traveling to one of Earth's most extreme environments, will continue its legacy of exploration as it ascends Mount Everest with two thrilling new original specials.

The TV specials go hand in hand with National Geographic's July print magazine issue which will focus solely on the mountain's unique history through both science and storytelling.

Its latest offerings continue the brand's unmatched coverage of the mountain located in the Mahalangur Himal sub-range of the Himalayas.

The first one-hour documentary, which will air on 15 July at 19:20 on DStv 181, is titled Expedition Everest. It's part of the National Geographic and Rolex Perpetual Planet Expedition partnership and is narrated by Tate Donovan.

It follows a team of elite scientists on the most comprehensive scientific expedition to Mount Everest to install the world's highest weather stations. The groundbreaking mission captures the drama the dedicated, elite expedition team faced and reveals the high stakes and motivations of those who risk their lives to discover the secrets of Everest. Climate scientists Baker Perry, Tom Matthews, and a team of Sherpa guides build the highest weather station in the world at the Balcony on Mount Everest as part of the National Geographic and Rolex Perpetual Planet Everest Expedition. (Photo: National Geographic Society/Mark Fisher)

The second special Lost on Everest, which airs on 22 July at 19:20 on DStv 181, follows journalist, adventurer, and renowned climber Mark Synnott and National Geographic photographer Renan Ozturk as they set out to solve one of mountaineering's most enduring mysteries: What happened to the great explorers Andrew "Sandy" Irvine and George Leigh Mallory, who disappeared on 8 June 1924, while attempting the first summit of Everest?

The clues to solving this mystery lie frozen somewhere near the top of the world's tallest mountain.

The team, which includes various other professional climbers who have more than 100 combined years of experience on the mountain, sets out to find the body of Everest pioneer Andrew Irvine. George Mallory's body was located in 1999.

What they discover could possibly rewrite mountaineering history. "No mountain on our planet has been the subject of as much fascination and research as Mount Everest," said Evert van der Veer, vice-president, Media Networks, The Walt Disney Company Africa.

Van der Veer added: "Completing a climb is a strenuous and potentially deadly undertaking due to the extreme altitude, avalanches, icefalls, and other hazards. Now, new technology in both science and cinematography is opening endless possibilities for exploration and shedding new light on this iconic landmark, which is captured in these two exhilarating documentaries."

We live in a world where facts and fiction get blurred
In times of uncertainty you need journalism you can trust. For only R75 per month, you have access to a world of in-depth analyses, investigative journalism, top opinions and a range of features. Journalism strengthens democracy. Invest in the future today.
Subscribe to News24
Related Links
Netflix adds Black Lives Matter collection
Nasty C and Thabang Molaba hope people take away this one thing from 'Blood & Water'
FIRST LOOK: Gripping new local drama 'ISONO 'coming to BET Africa
Next on Channel24
John Oliver: Should the Summer Olympic Games go ahead amid surge in Covid cases?