Suidooster stars about the polygamy storyline: 'There's going to be a lot of fireworks'

Local soapie Suidooster has everyone talking with its current storyline.

After being married to Mymoena (Jill Levenberg) for over 30 years, AB (Cedwyn Joel) announced that he would be taking a second wife, Farah (Lee-Ann van Rooi).

On the latest episode, AB tied the knot with Farah while Moena prayed for strength to face her new reality.

It's the first time a polygamy storyline has ever been done on Afrikaans television. Jill shares that she pitched the storyline because she thought that it is an important issue that needs to be explored.

"I don't think it's ever been explored from a woman's perspective and point of view and I think it's important that we don't only choose storylines that are safe but that we actually challenge our audiences.

"I thought that this was an important storyline and relevant because it happens so often in our society, and a lot of people are not even aware of it."

Lee-Ann adds: "The love triangle is a universal dilemma. It's reflected legally in many cultures. So, I knew it would be different, interesting, challenging, a perspective worth a story."

For Cedwyn, it was important that they tell the story in a truthful way, so they did their homework and researched the rules that govern polygamy and the marriage. 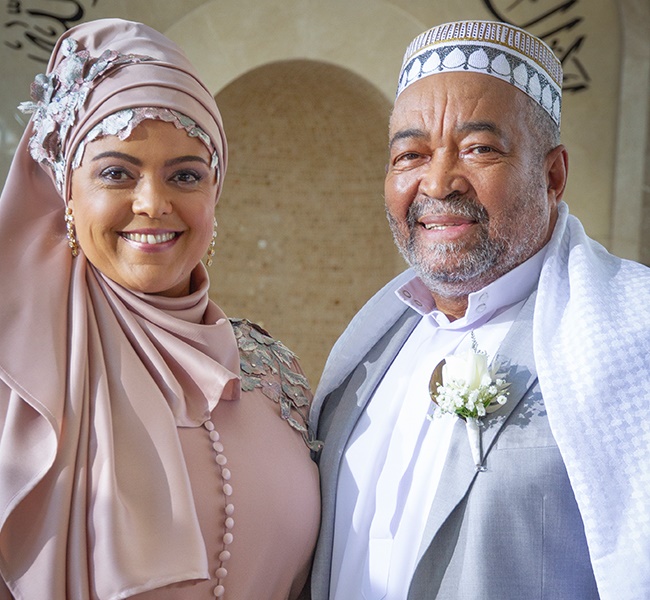 While the actors say, they weren't surprised by the reaction from viewers; they were shocked by some of them.

"I was a bit shocked at some of the reactions on social media, and I was surprised at how involved people got on social media. But it was heart-warming to see the love for the show, and it was great to see how involved people got because they were challenged or informed. Some people didn't know that it existed, some people were emotional because they have gone through something similar and it sparked debate, and that's the most important thing", says Jill.

She continues: "The other thing I noticed was how some people started to attack artists personally because they get angry at the character. Some people got personal with artists. It is vital to remember as artists we are just holding a mirror up to society. It's our job to inform, educate, entertain and challenge. I think people need to remember that we are characters portraying roles."

What they hope viewers take away from this storyline is more understanding and tolerance for other cultures and religions.

"Even though we may not understand certain aspects of certain cultures that we need to respect each other and we cannot judge one another's religion and cultures, we need to practice tolerance and respect for one another," says Jill.

Cewdyn adds: "The layperson out there who doesn't know how it works immediately has sex on the mind and that is very far from it.

Lee-Ann hopes that people will pay more attention to the relationships that they are in.

"Treasure your partner. Do the work to make it work, and if not, then adjust accordingly. But mostly to live your life. And be responsible for the choices you make." Cedwyn says that the challenge now for AB is to reconcile the idea with Moena and Farah so that they can come to an amicable arrangement. He has to treat them both equally and satisfy them in terms of taking care of them.

"There's going to be a lot of fireworks still cause these things need to be sorted. Of course, there are hidden things, particularly from Farah. I don't think she was very truthful with AB when she first approached him, I think she had ulterior motives, and AB was blown away by this woman even though his wife and children warned him." The new Mrs Samsodien (Lee-Ann van Rooi).
Photo: Suidooster TV
We live in a world where facts and fiction get blurred
In times of uncertainty you need journalism you can trust. For only R75 per month, you have access to a world of in-depth analyses, investigative journalism, top opinions and a range of features. Journalism strengthens democracy. Invest in the future today.
Subscribe to News24
Related Links
Kate Vosloo's grandson and a character you'll love to hate, we meet the new Suidooster cast members
3 actors joining the cast of 'Suidooster'
WATCH: 'Suidooster' celebrates 1000th episode with highlight reel
Next on Channel24
Filming on Bridgerton resumes following coronavirus shutdown