Growing up, we all have certain shows that left an indelible mark on us that we would be quoting to our friends and family members for years to come. For my brother and I, one of those shows was the medical comedy Scrubs. We almost never missed an episode back in the days before on-demand streaming, and even today have rewatched it many times. Its core was always to be able to find the humour in the horror of human mortality, and I'm certain was part of what inspired my brother to become a doctor.

So when I got the opportunity to interview Sarah Chalke - one of the main actors who brought the no-frick Dr Elliot Reid to life for eight years - it was an exciting moment in my career, and elicited sweet jealousy on my brother's part. Bubbly, charming and exuding a genuine interest in what you have to say, I was thankful I managed to make the most of the short time we had.

Today, she is the voice behind another iconic character, although a little darker and scarier - Beth from the hit animated show Rick and Morty, which has after much waiting restarted season 4, and reintroduced us to the universe of portal guns, infinite horrors and the insanity of Rick with one of its most bonkers episodes yet.

"One of my favourite parts about it is that you get the script in your inbox and you're so excited to read it and see what's going to happen. But whatever you picture in your mind can never, ever match up to what these animators are going to come up with.

"And then obviously, I didn't even know about the coronavirus reference that they stuck in at the end [of the first episode], which they must have done really last second. I think that's one of the amazing things about animation, that you can actually make it quite topical very last-minute, which you couldn't in real-time.

"I loved seeing [the mid-season premiere], and I thought that with this show and this season, in particular, the animation has gotten more ambitious than in past years. I am such a huge fan of animation - I can't draw myself - and I'm completely in awe of what the animators on Rick and Morty do."

Beth, the daughter of the morally ambivalent scientist Rick, is probably one of the show's most complicated characters with her own highly questionable life choices, but how relatable is she to Sarah? "Hahaha, well I'm definitely also a mom of a son and a daughter - and I hope that's where the similarities end, because Beth used mind-control hair clips and whips to make people like her when she was a child and I hope I never did that.

"But the things that I find absolutely relatable is her wish to have approval and have love. It was really fun for me - obviously, she changed so much over the seasons, and it got really fun over the last couple of years to play Beth and find out whether she's a clone or not.

"We'll see how it goes, but I think it was really in the ABC's of Beth where you get more of an understanding of the character and where she is coming from. As an actor, it's not like we find out anything in advance when the script comes out. That was a fun episode for me to learn more about what's happening with Beth, why she is the way she is and how her dad built her this fake world to protect her from herself and other kids."

But whether or not she did clone herself - a big question that hangs over the series because of the unreliability of characters - Sarah has no idea and only finds out what happens week to week.

"But it is kind of cool though, not knowing what happens," I say in response.

"I know, it is actually, and the way that they kind of deal with that and the rest of the season is so fun!" says Sarah.

THE FREEDOM OF VOICE-ACTING

While being part of two iconic TV shows, Sarah finds that there are interesting differences between voice acting and live-action performances.

"It's such a different way to work. There's something that's very freeing and creative about voice acting because you're not thinking about any other aspect of what you're doing - it's really just down to your voice.

"If you want to do another take in live-action, you're like, 'oh can I do another take?" - you're asking a hundred people to wait and do that take with you while you try something else. Whereas when you're in a sound booth, you can try something ten different ways in like a minute, and so there's something quite liberating about that way of working.

"The part of live-action that's really fun is that you get to work off of someone else, and usually when you're recording in a sound booth, we're actually just recording on our own. But the cool thing is that [creators of Rick and Morty] Dan [Harmon] and Justin [Roiland] are usually there, and they're giving us feedback." 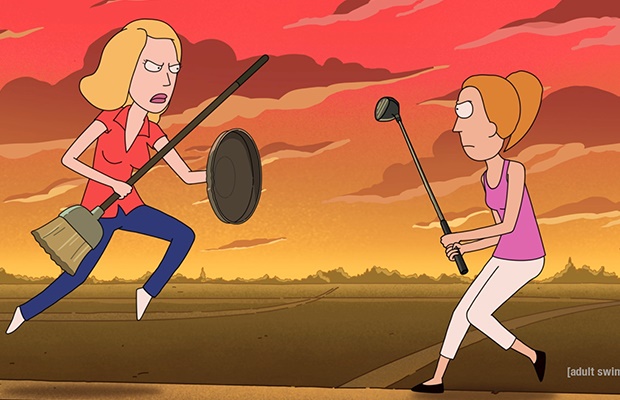 Sarah has been in the industry since the early 90s and shared some of the big lessons she learned while working in TV.

"When I was younger, I [learned] resilience, because you've got to throw your hat in the ring a lot of times, and a lot of times it doesn't work out. In your late teens, you just have to deal with that level of rejection, pick yourself up after you failed and say, 'let's go back into the audition room.' You gotta have the right perspective on auditioning - 'I'll just go in there and do my best and next'."

Later in her career, however, she picked up something else that had a big impact on her life.

"The other part of it is, when you do find some level of success, is to figure out how to help other people, raise awareness and use that platform in a good way.

"We were able to do that. My son got Kawasaki disease when he was 15 months old and it was something that I never intended on talking about. I then met a lot of parents who had not had such a good outcome as we did, and so I decided we needed to get the word out there in a big way, because the symptoms are so visual and you have such a short window to have treatment. So, I did an episode of Grey's Anatomy about it to raise awareness."

The disease causes a severe reaction in the immune system, causing a long-running fever, peeling skin and can affect the heart. Most common in children, it is easily treatable if you diagnose it very quickly. However, the disease has started appearing in US headlines because of a link to the coronavirus pandemic.

With medical professionals so hard at work on the frontlines, I wondered what a Scrubs episode about Covid-19 would be like.

"It's interesting because the second we started to hear about Covid-19, I immediately thought of that Scrubs episode where the virus lights up green, and you just see how something can transmit, somebody touches something... and it passes until it gets to the vulnerable patient, and this silent eeriness of this kind of transmission was in the back of my mind, and I would picture it as I was in the grocery store.

"So the episode would probably be something along those lines, and they would have to try to find the humour in it, which is always what amazed me about the show, taking something so dark, and they would find a way to make it funny."

But how would Dr Reid react to the pandemic?

"Oh my god, much like myself! She would react much like myself - a lot of anxiety over it. When I go to the grocery store, I take out the props from my drama class and put on like a makeshift PPE [Personal Protective Equipment] with a ski cap and sunglasses - but I think that would probably be her take on it as well.

"But I think she was always so studious and such a perfectionist that she would probably be researching all night and try to get to the bottom of it herself."

At the moment, Sarah is quarantining with her sister's family with six kids, three dogs and a cat between them, with very little downtime for everyone, getting ready for the next meal while cleaning up the previous one.

"You're trying to deal with the different levels of homeschooling - so we're doing some of the homeschooling from the school and, because we have such a big age range from age three to 16, we try to do some classes that we come up with on our own.

"So, my sister did one on the United Nations convention and the rights of a child. My uncle portalled in through Facetime and did a lesson on the emergency powers of a government during a crisis. I did one on voiceovers and cartoons, so all the kids read my audition slides for a cartoon I had just gotten, and we recorded them on my phone and tried it different ways - it was fun."

In terms of bingeing, they did Tiger King like the rest of us but needed something funny to watch afterwards and decided to rewatch all the seasons of Arrested Development.

And like the rest of the world, they had also been bitten by the baking bug.

"We have been doing a lot of cooking, and like a bunch of the world we're trying to learn how to bake bread - that's been a whole thing in itself. You know, like the sourdough starter, then you put in too much and then it explodes the next day and then all we have is a starter - so fried starter, which is amazing and the only thing I want to eat, and starter pancakes and sourdough starter muffins."

It's comforting to know our heroes are trying to cope the same way as the rest of us.

Rick and Morty season 4 is now available on Showmax.

We live in a world where facts and fiction get blurred
In times of uncertainty you need journalism you can trust. For only R75 per month, you have access to a world of in-depth analyses, investigative journalism, top opinions and a range of features. Journalism strengthens democracy. Invest in the future today.
Subscribe to News24
Related Links
5 things to know about short-form mobile video platform Quibi
Is that a model in a bowl of salad? Top 10 weirdest 'America's Next Top Model' photo shoots
WATCH: 20 of the funniest 'Friends' bloopers that will make you laugh out loud
Next on Channel24
Filming on Bridgerton resumes following coronavirus shutdown

Read more on:
sarah chalkerick and mortycoronavirustv
You've got mail!