We get a taste of the new shows coming to Lifetime, History and Crime + Investigation channels

Johannesburg – From the moment I stepped into the Daytona showroom in Johannesburg on Wednesday evening, I knew I was in for a fun night out.

A+E Networks hosted a number of media at the luxury car supplier's glamorous venue for their content showcase, introducing new programmes coming up on their Lifetime, HISTORY and Crime + Investigations channels.

But this was no ordinary showcase. Guests were treated to an immersive dining experience, with signature meals designed by private chef Neill Anthony.

Each of the three courses was inspired by one of the network's channels, and it was delicious!

SA Crime Stories makes a comeback on the Crime + Investigation channel with a second season. This 13-part series will feature "stories that shook SA to the core", including the tragic abduction and murder of Leigh Matthews.

The channel will also do its part to shine a light on the plight of women and children in the country with a new special around gender-based violence.

"CI Africa will air specially curated programming for 16 consecutive days starting on the International Day for the Elimination of Violence Against Women on 25 November till 10 December," a press statement explains.

The channel also welcomes the return of popular show 60 Days In.

In 60 Days In: Narcoland, participants will infiltrate a drug cartel to collect crucial information on how these gangs operate.

Other shows coming to the channel include Poisonous Liaisons, The Accused and Very Scary People.

The starter, designed by Chef Neill Anthony and his team, was inspired by a crime scene. With tuna being the star of the show, guests were encouraged to put on their latex gloves as they dug into the creative dish. Some of the biggest names in Hollywood join the HISTORY channel with it's new October campaign.

Also joining the channel is Damian Lewis who will be behind Damian Lewis: SPY WARS – an "8-part docu-drama that features the remarkable true stories behind some of the most gripping and important spy operations of the last forty years."

The main course was inspired by the HISTORY channel show, Forged in Fire. Deliciously delicate lamb shoulder was served with the fanciest potato bake I have ever come across, Alongside fresh pea salad and pea puree. 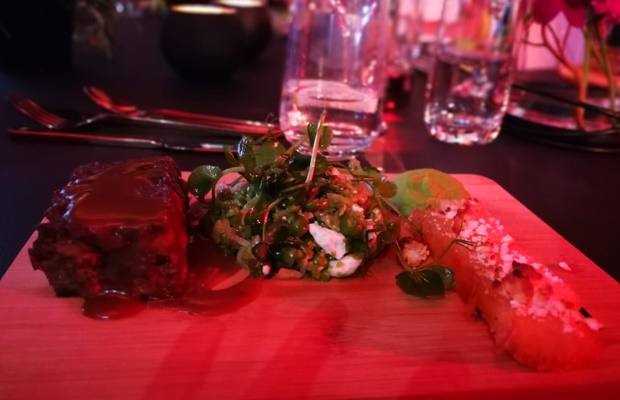 Don't Tell the Bride is coming to South Africa!

A+E Networks acquired the rights to produce the international hit series for their South African audience. The show follows a groom as he takes control of his wedding preparations with his only limitations being a supplied budget and his imagination.

A Wendy Williams biopic is also in the pipeline.

Dessert brought all the drama expected from the Lifetime channel. With a "rags to riches" story, guests were treated to a grilled cheesecake sandwich in a lunch box, alongside a buttermilk panna cotta with a raspberry reduction and candy floss topping.