We speak to Gary Carr about new polyamorous drama Trigonometry Gary Carr has played a jazz singer in Downton Abbey, a pimp in The Deuce, himself in The Good Fight, and now he's a paramedic in a polyamorous relationship.

In Trigonometry - available on Showmax from Wednesday 1 July - the 33-year-old plays Kieran, a work-weary paramedic who's in a relationship with Gemma (Thalissa Teixeira), a struggling chef. To ease the financial strain the couple decide to get a lodger, Ray (Ariane Labed) a former world-class synchronised swimmer.

What develops between the three is an unexpected modern-day love story that will change their lives.

"The story and the characters aren't something we always see. It's a very human story, so I'm really excited to be a part of the project," says Gary in a telephone interview.

About what attracted him to the character, he says that Kieran was a very sensitive man who didn't have any toxic masculinity traits.

"It was really refreshing to see someone who was so selfless and so dedicated to the people around him. He has a good heart, and I found that endearing."

For Gary, it was important to focus on the study of the character and the human rather than what a polyamorous relationship is.

"It's different for everyone the same way in which relationships with two people are different.

"The story is very specific for the show. We just focused on creating these characters and tried to understand the world they were living in and how they navigate as a unit in a world where this type of relationship is seen as 'unconventional'."

About the journey the trio goes on in the series, Gary says it's three people who are fighting for something that they believe in, which is love.

"Throughout the series, we focus on Gemma, Kieran and Ray as a group, but we also look at how their decision to live as one affects the people around them. You see the highs and lows and fears and worry that they go through as humans." Thalissa Teixeira as Gemma, Ariane Labed as Ray and Gary Carr as Kieran in 'Trigonometry'. 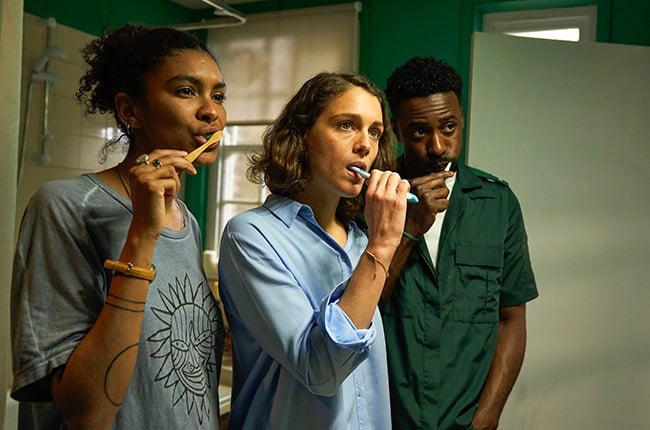 Gary hopes the series will give viewers some insight into polyamory and clear up some misconceptions and judgements that people pass.

"Some people might think that it's strange and it's something that can't work and that it's not a real relationship. Whatever that means. Or that people are just experimenting or that they are people who are lost and trying to find their way. A lot of monogamist relationships don't work either.

"What I like about these characters is that they don't ascribe to certain boxes. They live openly, and it's really beautiful because not a lot of people do that, they are not fazed by what people think they should be doing."

We live in a world where facts and fiction get blurred
In times of uncertainty you need journalism you can trust. For only R75 per month, you have access to a world of in-depth analyses, investigative journalism, top opinions and a range of features. Journalism strengthens democracy. Invest in the future today.
Subscribe to News24
Related Links
Meet the Price sisters in M-Net's new telenovela Legacy
M-Net previews Perry Mason drama ahead of TV broadcast
Jodie Comer on her role in Killing Eve: 'When you dare to do something absurd, you can make magic'
Next on Channel24
Netflix releases first look of The Crown's new queen