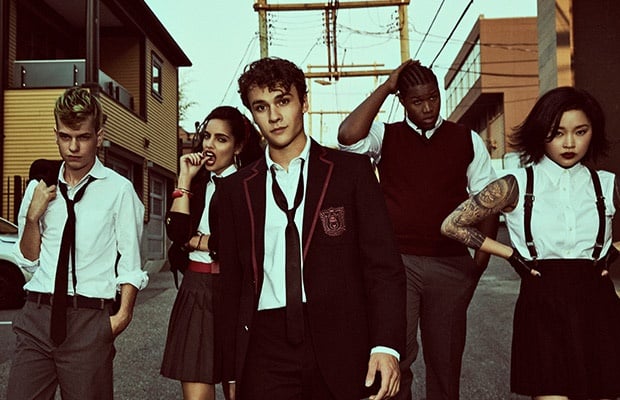 Marcus Lopez is a homeless orphan doing his best to survive on the streets and, as the prime suspect in the burning of an orphanage and the death of dozens of kids, has to avoid the cops at any cost. After a particularly fraught run-in with the law, he is saved by a mysterious girl with a sword. Her name is Saya Kuroki, and she offers him a new life and a new purpose at King's Dominion, a boarding school for assassins.

It may have one of the silliest premises imaginable, but ever since debuting in 2014, Rick Remender and Wes Craig's Deadly Class has consistently been one of the best comics on the shelves. Rather than being Harry Potter with Katana swords standing in for magic wands, as its high-concept might suggest, Deadly Class has been something through which Remender has explored his own youth as a teenage outcast in the 1980s.

It has more than its share of shocking plot twists, bloody confrontations and the most deadly form of final exams imaginable but as fun as all that is, the reason it works so brilliantly is because – like Buffy: The Vampire Slayer before it – it uses its ludicrous genre trappings as a way to examine the trials, tribulations and turmoils of adolescence. It's also suffused with Remender's obvious passion for comic books, post-punk, and grungey b-movies, while making the most of its Regan-era setting both for its aesthetic and as a target for its ire. Most of all, though, it's a weirdly (and often bloodily) idealistic look at how, to a great degree, we are the sum of the human connections we make.

The result is a brilliant hodgepodge of a series that ping-pongs from shocking violence to goofy comedy to soapy teenage melodrama with reckless abandon. It's a genre-busting mix of a thousand influences that is as likely to spend pages upon pages on teenage characters just hanging around and discussing the intricacies of the '80s music scene as it is to have an immaculately choreographed outburst of violence as it is to have extended fart gags.

It's incredibly gratifying, then, that when its TV-series adaptation hit the Syfy channel in late 2018 (it finally made its way here to Showmax earlier this month), it quickly proved itself to be no less singular in its new but similarly crowded medium. Sadly, it was rather too unique as it drew fairly low viewing numbers, a mixed and somewhat perplexed reaction from critics and was ultimately cancelled after its 10-episode first season.

This does make it a rather difficult show to review, then: can I really recommend a show that was only just getting going and that ended in a cliffhanger that will have you begging for season 2?

I can, as it turns out. First, it is largely very faithful to the comics so you can find out what happens next by picking up the third graphic novel collection (the 9th is releasing next month) and taking it from there. Warning: it goes even more berserk. Second, it's hard not to recommend a series that is this heartfelt and this stylish; something that is so wonderfully and so defiantly its own bizarre beast. And, honestly, why would I tell you not to spend a brisk ten hours in the company of such an enjoyable cast of outcasts, played so perfectly by a group of relatively unknown young actors (along with an eclectic group of character-actors in the adult rolls)?

Created by Miles Orion Feldsott and Rick Remender himself, and produced by Joe and Anthony Russo who had just finished making the Marvel Cinematic Universe the biggest movie franchise on the planet, Deadly Class is a series that unashamedly embraces its comic-book roots but also makes the most of the benefits of being a decently budgeted TV show.

It may not feel quite as personal as the comic book, but it is both a faithful adaptation and a really kick-ass TV show all of its own. Not only does the show mostly follows the same story and the same characters as the comics but it also keeps much of its '80s pop-culture touchstones, its adolescent rage and its willingness to try on everything from savage criticisms of Reganomics to comically intense psychedelic drug trips in Vegas. The massive tonal shifts don't work quite as well on screen as they do on the page, but they still manage to turn what is usually a storytelling flaw into one of the series' greatest strengths.

A 42-minute episode of TV, however, offers quite a bit more space than even a very packed 24-page issue of a comic book and despite some occasional pacing problems, Remender and the show's other writers have made the most of the extra room they have to breathe. In particular, they get to spend a lot of time fleshing out the supporting characters, making you care about them far more than you do in the comics.

Admittedly, the students of the King's Dominion do, at first glance, fall into racial stereotypes but this is actually mostly shorthand for the types of underworld groups whose offspring end up at a school for killers (Yakuza, the cartels, gangbangers, neo-Nazis, etc.) rather than for the characters themselves, who usually resist such neat categorization. Plus, it's a smart way of blurring the lines between high school cliques and prison gangs in the heightened reality of the show.

The three main characters of the comics – Marcus, Maria and Saya – are much the same as in the comics but are given even more emotional heft and likability by the young actors who play them. Benjamin Wadsworth, Maria Gabriela de Faria, and Lana Condor may not have been household names when the show was released (Condor actually shot to fame around the same time as the star of the massively popular and critically acclaimed romantic film series, To All The Boys I Loved Before) but they carry this series with ease. Wadsworth is, admittedly, more of a traditional, handsome leading-man type than the Marcus of the comics but he does a fine job otherwise. I have no such qualifiers for his leading ladies, though: de Faria and Condor are simply brilliant.

It's the rest of the cast, though, where the show really gets a leg up over the comics. Marcus' two best friends, Willy and Billy (or the two Williams, if you like), and goth-girl Petra feel much more like fully realised characters in and of themselves than mere foils for our main characters. You'll come out of the series rooting for them every bit as much as, if not more so than, the more damaged leads. Actually, it says a lot about the humour and humanity of Deadly Class that this group of teenage killers (or are they?) work their way so firmly into your heart and make for such great company.

The biggest departure from the comics by far, though, is the school's headmaster, Master Lin. Both the writing and Benedict Wong's masterful performance take what was a fairly one-note force of pure malignant evil in the comics and turn him into a highly complex, layered and ultimately sympathetic character. The Lin of the comics is still a complete mystery 45 issues in, but here he gets his own story and his own motivations that are front and centre enough in the show to earn Wong his top billing in the cast list.

Deadly Class, the show, doesn't just use its new medium to flesh out some of the characters, though, but makes the most of it to give us some fantastically kinetic action sequences, a vibrant comic-book-inspired visual style (ironic, since its much more bright and colourful than this particular comic) and powerful, animated flashback sequences directly modelled on Wes Craig's art, lifted directly from the page. It also features a killer soundtrack stuffed with classics and lesser-known gems from the '80s (though, think more Dead Kennedys or Talking Heads than Michael Jackson or Jefferson Starship) that in both usage and sheer musical brilliance stands up to the very best of Tarantino. Every issue of the comic comes with Remender's personalised playlist, and the music is taken from there and becomes the beating heart of every scene.

This is one of those early cancellations that really stings, basically. Fortunately, the story does continue...