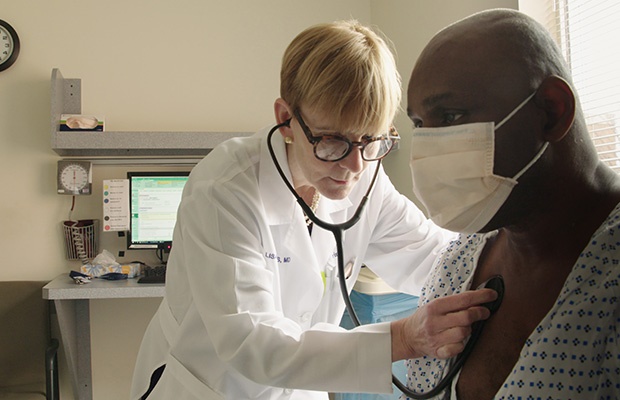 Dr Lisa Sanders crowdsources diagnosis for mysterious and rare medical conditions in a documentary series based on her New York Times Magazine column.

It is in our human nature to immediately be drawn to all things mysterious, miraculous, sometimes unbelievable and even a little gross – that’s why in every horror film the character always follows the strange noise; in every cop drama the detective searches the room without putting the light on, and yes that’s why cringe-worthy shows like Dr Pimple Popper will always be a fan favourite.

So, when Netflix sent me a notification that they added a show I might like, called Diagnosis, I was immediately intrigued. The show derives from a regular column in New York Times, written by physician Dr Lisa Sanders – if you’re wondering where else you recognise the name from you may recall her influence on the widely-popular Hugh Laurie medical drama House.

Now, if you are like me and do not often read columns in New York Times, Diagnosis will be your introduction to the mastermind who has quite literally opened the doors of medicine to people all over the world – whether they have had medical training or can relate to the extraordinary true-life story being shared.

Every episode in the 7-part docuseries introduces a new patient with a unique and sometimes life-threatening illness that doctors can’t quite diagnose. Desperate to help these people before they lose all hope, Dr Sanders decides to try a different approach by making their story accessible to people with or without medical training worldwide, in the hopes that someone - anyone - may be experiencing the same symptoms or perhaps share a fresh perspective that the doctors on hand have not yet thought of – and the responses are incredible.

As someone who has absolutely no medical background whatsoever, I found myself on the edge of my seat during every episode. It is filmed in a way that just the emotional connection generated had me invested in watching episode after episode to find out if they were eventually diagnosed and how their life changed thereafter. Then, of course, there’s the curiosity of what the diagnosis is because well, as I said earlier, its human nature to be drawn to things mysterious and different.

Aside from the emotional connection, I found myself particularly invested in the series because for a change; it’s not just another medical drama filled with attractive doctors, who encounter odd cases and yet manage to figure it out before the end of the day thanks to their deductive brilliance. It's real-life cases of people who have been suffering for years and still don’t have an answer. And by crowdsourcing, Dr Sanders is highlighting that, well, maybe, just maybe there is someone out there like me or someone who has thought of something that the doctors are missing.

Speaking to NY Times just after Diagnosis premiered, Dr Sanders made a very valid point, saying: "The patients are not the backdrop. They are the show." And Diagnosis puts that on full display.

Now, before I rub trained medical professionals the wrong way, I would very clearly like to say that the above mentioned does not mean I will never trust doctors again or have any less faith in their abilities. Healthcare professionals are vitally important and if this series does anything for the industry, it should motivate doctors to communicate with one another and learn from each other – after all, the majority of the responses were from a host of different specialists around the world and responses from those who aren’t, were people who could relate in some way and offer guidance or even just share stories.

Having watched Diagnosis with a medical doctor, I was eager to hear his thoughts of the show that gives anyone the platform to share their opinion/life experiences and potentially make a diagnosis, and his answer was this:

'What makes Diagnosis a compelling show is that it makes complex medical mysteries accessible to everyone and explains processes in a way that can motivate viewers to derive their own conclusions as well as share their thoughts of potential diagnoses. Having said this, the docuseries does, however, highlight the shortcomings of the medical field and their patients when faced with bizarre cases; as well as the fact that sometimes people rely too heavily on or expect doctors to know everything which in turn causes frustration from both ends and potentially a negative experience. In conclusion, the one thing about medicine that not many people know or understand is that it is a team effort and not necessarily just the GP, or specialist making the decision. Diagnosis illustrates that some cases just need a bigger team than meets the eye.'

The human body is a fickle thing, and no matter how much research is done, no person could ever really fully understand it.

Diagnosis is an emotional, true-life docuseries that highlights the complexities of medical science, and the promise of both modern medicine and technology’s capacity to connect patients with other people around the globe who may have the answer they’ve been looking for.