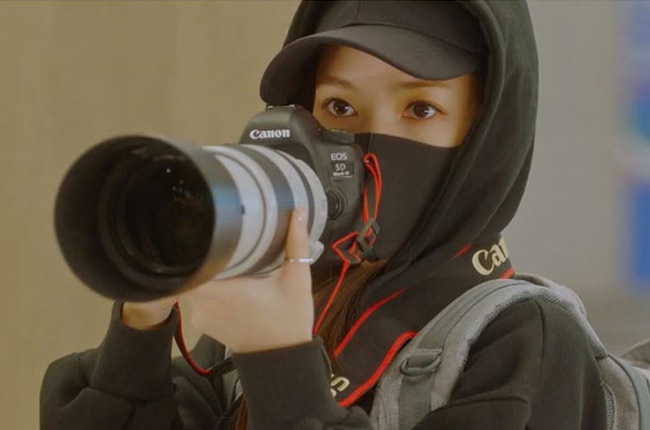 An art curator's life unravels as she tries to keep her pastime as a die-hard K-pop fan secret from her gallery's new director.

When Netflix first recommended Her Private Life to me, I skipped it; I didn't really want to watch something about a fangirl but, oh boy, was I pleasantly surprised. Beneath the fangirl premise, is a tender love story that had me smiling the whole way through.

The story centres on Sung Deok-mi (Park Min-young), a senior art curator who secretly runs a fan website for Cha Shi-an (Jung Jae-won), a member of the boy band White Ocean. A chance encounter with the gallery's new director Ryan Gold (Kim Jae-wook) puts her secret pastime at risk of being exposed.

After a meeting with Shi-an about an exhibition at the gallery, the media mistakes Deok-mi for his girlfriend, sending the fandom into a panic. To help ease the media and fangirl stalking, Ryan offers to be Deok-mi's pretend boyfriend.

If you're a romance fan, you'll know this fake relationship trope well. Two characters who pretend to be in a relationship, develop real feelings and a real relationship in the end. From then on, the plot is very predictable, but the ride is so enjoyable.

The first half of the show focuses strongly on the fangirl aspect. Don't expect much commentary on the social and psychological issues of fangirling though. The show gives a peek into how obsessive some fans can become. When the news breaks that Deok-mi is Shi-an's "girlfriend", she is assaulted by a group of fans. Another fan is involved in a car accident with Shi-an as she tries to get close to him to find out if he is really in a relationship. Later in the show, another character works on a docuseries titled The Twisted Love of Fanatics. The show touches on it but doesn't explore the darker side of fangirling. With that said, I love that Deok-mi isn't a stereotypical fangirl and that she owns being a curator by day and fangirl by night when she changes out of her power suits.

The second half of the show focuses more on the relationship between Deok-mi and Ryan, and there is also a twist involving Ryan's past. It provides some dramatic tension but again, it was very predictable.

The beauty of this show lies in the development of the relationship between Deok-mi and Ryan. I enjoyed this, in some of the other K-dramas I have watched the OTP (one true pairing) only get together in the end, so you don't see how they interact and grow as a couple. But in this one, with the second half dedicated entirely to their relationship, you see how it blossoms between the two. They are supportive of each other, know when to give each other space, handle conflict in a mature way, and are playful. The characters and their relationship are so beautifully written that it will have you swooning. This is basically the most perfect relationship ever.

As the leads of the show, Min-young and Jae-wook carry the drama well. The chemistry between the pair is off the charts! There were some scenes of the couple where one gets the sense that they weren't in the script because they were so natural. In an interview, Min-young shared that there were some scenes that were adlibbed. This is Jae-wook's first romantic lead role; in my opinion, he hit it out of the park. He's the TV boyfriend of my dreams.

I struggled to rate this series. I loved the couple so much, but there were some instances when the plot let me down. Towards the end, there is a childhood connection and memory loss twist, which is a common trope in K-dramas. Having just watched What's Wrong With Secretary Kim, which Min-young also stars in, it felt a bit like déjà vu. There is also a love triangle which I felt was a bit forced and the supporting cast was just background characters.

Despite that, Her Private Life is on my favourites list.

If you're into romance and looking for something light to escape into, this one hits all the right notes.