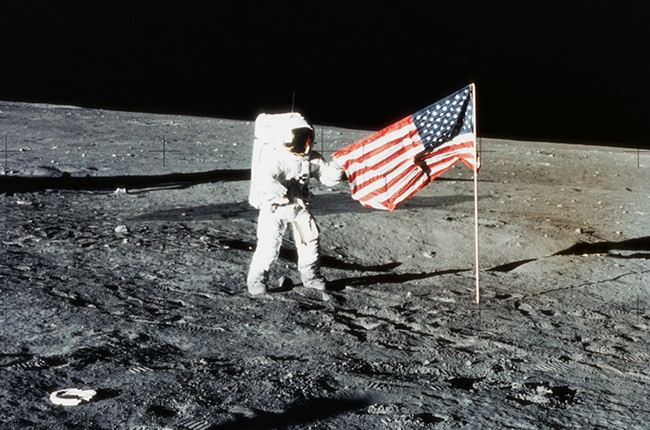 An Apollo 12 astronaut stands beside the United States flag on the surface of the moon on 19 November 1969.
Photo: © CORBIS/Corbis via Getty Images

History 101 uses infographics and archival footage to give short lessons on topics ranging from scientific discoveries to social movements.

I'm not a history buff by any means. In fact, I steered clear of the subject throughout high school and never quite understood fellow scholars who found joy between the pages of a history textbook.

However, I do like knowing things. You know the person who randomly spews out facts about topics no one was discussing at family gatherings? That's me.

So, gear up friends, because I have been binging Netflix's History 101, and I am ready to share my newly obtained wealth of knowledge.

The series is divided into 10 episodes, each just over 20 minutes in length. However, upon inspection, you will quickly notice that episode nine, which focuses on AIDS, is missing from the list. The episode was removed before I had the chance to view it.

According to the Miami Herald, Netflix landed themselves in hot water when the show traced the origin of AIDS back to Haiti. Protesting the episode, Haitian Americans signed a petition which eventually prompted a response from the streaming service. Because I have not seen this episode, I cannot comment on any remarks made in it. My opinions on the show as a whole are therefore based on the remaining episodes.

I found that splitting the series into nice bite-sized chunks made it easier to digest. Each episode also focuses on a specific topic, so if you want, you could always click on the ones that you find most interesting and circle back to the rest at a later stage. I also don't think the show is meant to be a complete revision of a particular subject. It's more like a highlights reel – something to spark an interest and encourage you to research on your own.

Subjects covered include the evolution of robots, the space race, the rise of the fast-food industry as well as feminism and the fight for equal rights.

Infographics and archival footage are strung together to create each episode, with the voice of the narrator Natalie Silverman bringing the story to life.

Grab a warm drink and a comfy blanket to enjoy this interesting series by yourself, or rope in the kids or other family members and turn your Saturday mornings into a quick and fun history lesson. The best part is there's no surprise test at the end. And at your next social gathering, you get to say cool, unrelated things like: "Did you know as of 2020 we share the planet with an estimated 9 million robots?"