"We didn't sleep very much last night, Marisia said to me that it feels like her adrenaline's pumping," Marc tells me on a telephone call from Cape Town.

It's the morning after the big Bachelor SA season two finale, and I can hear that the couple are high on endorphins because their relationship status is finally public.

With the show still airing the couple had to keep their relationship under wraps, they admit to me that only their families and close friends knew that they were together.

"I think it's going to be especially strange when we step outside together and not have to hide anymore," says Marisia.

"I wonder if people will come up to us and recognise us through our masks?" Marc asks.

"Well, people are eagle-eyed, they will spot you," I answer.

When asked if they are a bit nervous about the attention they will receive in public, Marc says that if people do see them, they should come over and say hello.

"If you're going to look then come and say hi. It's like when you go to the gym, and people stare, and then you can feel their eyes on you. But if no one says anything, then it gets so awkward." (THE MOMENT: Marc confesses his love to Marisia. Photo: M-Net)

That's the inscription inside the ring Marc gave Marisia, which is a symbol of his love and commitment.

It holds a special meaning to the couple and one of the reasons why they decided to move in together during the lockdown period.

"We learned that trusting each other will make us stronger. There have been a lot of things that could have broken us up. But we worked through it, and we're definitely stronger together," says Marc.

On watching their relationship unfold on television over the past months, Marisia says that it was sometimes difficult reliving those moments.

"I think at the end of the day, it was a beautiful journey for both of us as individuals and also as a couple. It's so good to look back and see where it all started and how far we've come from then."

In the episode which aired last night ahead of the final rose ceremony, Marisia reflected on their date and said it was a crap day.

She says that day was quite difficult for her because of the things that she had heard.

"I heard that Marc didn't want to be there. That was why I was questioning him a lot on our date. Those were all rumours. He gave me the confirmation that he wanted to be there. It might be something you guys didn't see, but I did get that confirmation from him at the end of the day. And it made everything so much better." 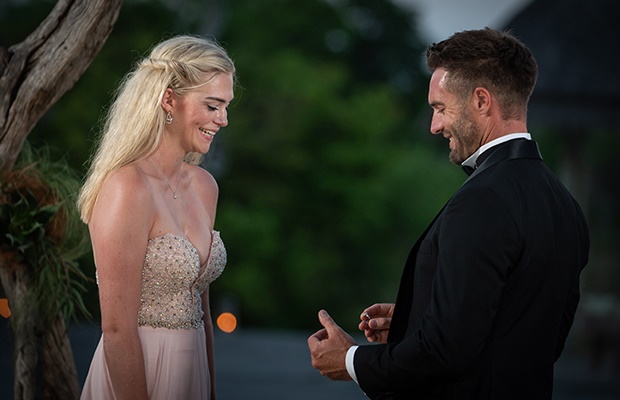 (LOVE AND COMMITMENT: Marc pulls out the ring. Photo: M-Net)

"We had so much chemistry on our first date."

While Marc can't say precisely when he knew Marisia would be the one he does admit that when he was with her, he felt that she was.

"You know, it's difficult because I needed to give everyone the right amount of attention. When I was with her, I felt that she is the one. But I still needed to give that time and an opportunity for another relationship. Everyone was there for the same thing. And I needed to be fair in that sense and also fair to myself because I came in with an open mind."

He adds: "To answer your question our first date on the motorbike, there was a lot of chemistry. And I think it's the same for her, when she fell off the horse, a lot of emotions were brought up."

After their time at the Kapama Game Resort the pair when on a baecation to Thailand. With the cameras turned off, they could focus on getting to know each other better.

Marc and Marisia agree that the trip was needed after their time on the show. (SEALED WITH A KISS: Happily ever after. Photo: M-Net)

"We're looking forward to doing the small things together."

Marisia moved into Marc's place only for lockdown because she didn't want to be alone. She has her own apartment just down the road.

I ask if she has any pet peeves to which she instantly answers, "no," then turns to Marc and asks, "Any pet peeves, Lief?"

"Let me just get out my list," jokes Marc.

"We get along very well. We've developed a routine. I mean things have sped along faster than I thought due to lockdown. At least in this phase we're already living together. Things are looking great. I'm glad that for us this happened, that we did move in together during this time."

The couple is looking forward to hiking together, walking on the promenade, shopping together and taking some road trips as soon as it's possible again.

"We're excited to do all those little things together that some people take for granted," says Marisia.