The Bachelor SA's Qiniso: 'I wasn't in character - I was me' Ahead of the big hometown visits, Marc had a difficult decision to make - six ladies and only four roses - Qiniso and Mulesa Lumina didn't make the cut in the latest episode of The Bachelor SA.

The 26-year-old from Cape Town's journey on the second season of the reality show started on a high. There was an instant attraction between Qiniso and Marc.

In episode three he whisked her away on an out-of-town date where the pair shared the first kiss of the season.

However, after a game of 'most likely to' in episode seven when the other women labelled Qiniso as 'not being there for the right reasons' things started to fizzle between the two as Marc started wondering whether she is 'being real, or just acting'.

After a two-on-one date with Jessica Calder in episode eight things seemed to be back on track with the pair. But it was short-lived as Marc couldn't seem to shake his lingering doubts and sent her home last week.

We chatted to Qiniso about her time on the show, found out what she thinks about Marc implying that she was acting, and asked her if she would be keen on being the first South African Bachelorette.

I did not at all think that I was going home that night. Generally, for every cocktail party and rose ceremony, I mentally prepared myself for leaving and making peace with the idea that Marc may not choose me – being prepared for the worst makes you stronger for the worst.

You missed the date with Marc because you had dental work done. If you had gotten that extra time to spend with him, do you think it would have made a difference?

To be honest, I have no way of knowing if me being on that group date could, or could not have made a difference. I don't live my life according to "what ifs" but I can say that I do think not seeing him was to my detriment. With that many incredible women around you after the same man, you have to make sure you don't fall through the cracks and take advantage of any opportunity that comes your way. Unfortunately, I could not take advantage of the opportunity that was given to me. It is also not like I could hand Marc a doctors note and be like "Sorry I couldn't come, can I have another chance." It doesn't work like that. Time is a rare and scarce commodity in the mansion.

Your last day in the house and that cocktail party came across very awkward. What was the general mood between the ladies, and specifically you and Jessica R, when you were alone in the house?

There was nothing going on between me and Jessica R on that couch, just silence... that is why it was so awkward. We literally had nothing to talk about. I was still in dental pain at the cocktail party, so I was just focused on talking to Marc, and then being there for Bridget and supporting her and giving her my love when she needed me. (THE FIRST KISS: Qiniso and Marc share the fist kiss of the season. Photo: M-Net)

You got the first kiss and went on the first 'home' date. What do you think led to the spark dying between you and Marc?

The spark never died between Marc and I, it just never got a chance to grow. I feel like his affection and curiosity for others was greater than they were for me and that's why I say our spark didn't die, it just didn't get a chance to be a flame, and maybe it wasn't meant to be, and I don't blame him for putting his energy into the other women with whom he had something growing.

In the last few episodes, Marc mentioned over and over that he didn't know whether you were acting or genuine. What are your feelings about this?

Just because I am an actress, doesn't mean I can't have genuine emotions and reactions, that's quite absurd. I wasn't in "character". I was me with him from beginning to end, bubbles and quirkiness included. I never stopped wearing my heart on my sleeve and trying to connect with him.

Looking back now, and having seen the episodes, did you have any idea the other women also felt as though you weren't being genuine when you were around Marc? How did that make you feel because you'd gotten pretty close to many of the ladies in the house?

I have no bad feelings towards anyone. They said what they said and did what they did during a very stressful time in our lives. I have nothing but forgiveness for them; I empathise with them because I was there too; it was a difficult experience for everyone. I also never stopped being myself, with Marc, the ladies and SA. So I actually found it so funny that they were obsessed with this idea that I wasn't being genuine. Yes, guys, a brown girl that is loud and bubbly and as beautiful as she is intelligent totally exists – and it's Qiniso. She will not apologise for taking up the space that God intended when he brought her soul to this earth. 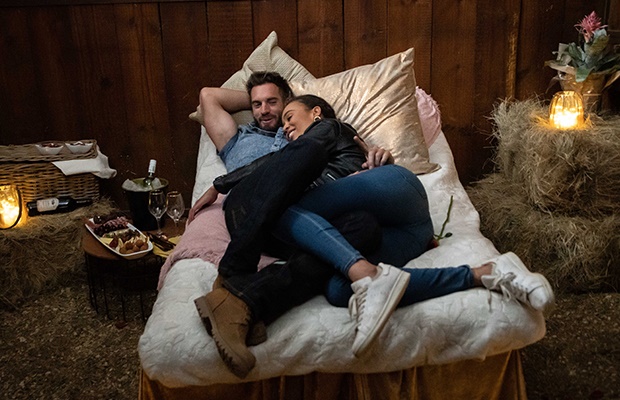 (TWO'S A COMPANY: Marc and Qiniso spend some quality time after the two-on-one date. Photo: M-Net)

You got very emotional on that two-on-one date? Why was that so hard for you? And looking back, and seeing what Jess C had to say about you crying, how do you feel?

It was hard for me because not only was I blindsided by Marc, but so was Jessica C. He told her he was going to take her on a one-on-one and him saying that was clearly a lie. I was so sad that he let both her and I down and that I unknowingly and non-consensually was made part and parcel of letting her down. That was not fair to her or me, and it was not fair to the friendship and closeness we had begun to foster. Jessica C said that I was acting, which was really disappointing. But I forgive her. She was angry. The thing I guess I want everyone to know about me is that when I am happy, it's 100% and so on for all my other emotions. I feel everything deeply and that, again, is the way I was designed by the universe, and I cannot apologise for feeling that deeply about things especially because it is something I cannot change.

You were a fan favourite on Twitter, and people have said you should be the Bachelorette. Would you be open to something like this?

I really loved meeting and engaging with everyone on #TeamQiniso. I honestly had no idea that they would love me like they did, and their love gave me so much strength to watch the show and relive the vents I went through all over again. I love my Twitter squad deeply. I would be open to being The Bachelorette if M-Net offered me the role and finds the best men South Africa can offer because I'm still looking for them! So you're still looking for love?

Hell yes, I am still looking for a partner with whom I hope to foster love. I have so much love in my life already; I am so blessed and fortunate. But I am ready to add romantic love into my life and begin to really plan out a future with marriage and kids and joy.

Related Links
Mulesa on her stolen date on The Bachelor SA: 'I was disappointed in Marc – we're on shaky ground'
'The Bachelor SA' host Jason Greer is on a mission to feed 200 families - and here's how you can...
Jessica C on The Bachelor SA: 'Marc never gave me a chance'
Share
Next on Channel24
The Bachelor SA's Rikki on the backlash: 'One slip up and then you are told you are evil or to go die - it's shattering'