This is according to Sunday World who are reporting that sources close to Melusi's baby mama Palesa Yvodia Molemela have revealed that she intends to obtain a warrant of arrest.

It's believed that Melusi has failed to live up to the court's order that he pays R1500 a month.

A few months ago reports stated that Melusi had to return home to KZN as he was too ill to work. This is also believed to be the reason behind him not coughing up for his child.

"Palesa is struggling financially as a result of his failure to support his child. This is the reason she wants the court to intervene," the source told the paper. 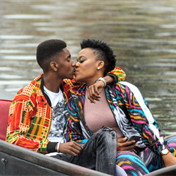