Cape Town - These local YouTube sensations are getting thousands and (for some superstars) even millions of views on their vlogs, that are seen all over the world.

From Moshe to Suzelle, here’s a helpful overview to give you a heads up about who is hot and happening in the world of DIY broadcasting.

This young creative – who was born in London but went to school in Knysna and Durban, South Africa- not only has a YouTube Channel where celebs from all over the world get interviewed but a book that is selling out all over the United Kingdom.

If ever there was a local vlogger that embodied the phrase “Local is Lekker” then it’s Mark Fitzgibbon with his lexicon of Mzansi slang . He likes to push boundaries and keep his viewers on their toes, so even though his content is always hilarious be warned that not all of it is safe for work.

Here he is explaining the pitfalls of traffic in The Mother City:

I've decided that my memoirs will be called "Winging it- a story of adulthood" pic.twitter.com/2XNi0HmtIq

His videos are funny, moving and so smart. Here Moshe acting as an Agony Uncle (of sorts) for Bona Magazine where he helps fans that write to him with relationship woes :

She’s Angelina Jolie’s bestie…sort of…not really. The main point is she is as funny as can be, as local as a Protea and just as pretty.

Watch Anne Hirsch be as awkward as can be filming in a car boot here:

We have nothing but love for this local instructional video queen who post about stuff that will make your life easier like how to peel an apple flipping fast or most notably how to make a braai pie.

Related Links
WATCH : 'You are lying' screams passenger at pastor
Share
Next on Channel24
The top 3 entertainment news headlines that dominated SA's social media channels in 2020 (so far) 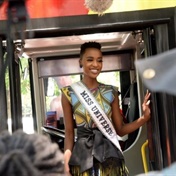