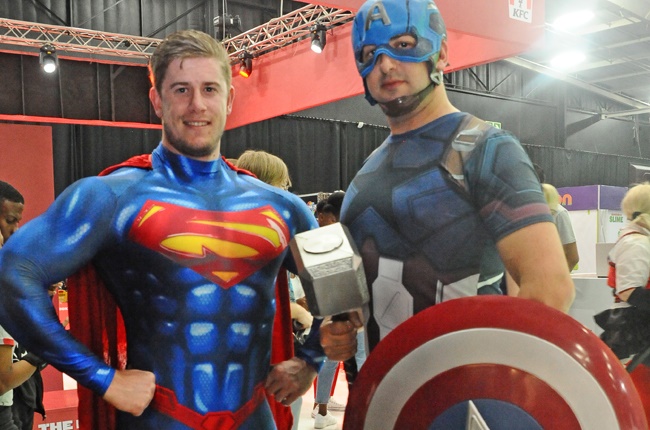 Comic Con Africa has attracted thousands of fans since its inception in 2018.
Photo: Oupa Bopape/Gallo Images

Are you ready for Comic Con Africa?

Now in its third year, the comic book convention made the decision to move their 2020 event online due to a ban on large gatherings brought on by the coronavirus pandemic.

The online con will take place from 24 to 27 September. Here's everything you need to know if you're one of 6000 fans who have registered to attend.

The online version of Comic Con Africa will be free to the public. Once you have registered on the website, you will have access to the con when it opens at 10:00 on Thursday.

"Once signed in, the hub will open and visitors will find themselves in the Pop Culture galaxy especially created by Comic Con Africa. Much like the various halls at a physical convention, different planets will lead fans to different fandoms," a press statement explains.

Where to catch international stars

Celeb panels are a huge part of Comic Con, and the virtual event will be no different. The "Main Stage" will be hosted on YouTube and will include interviews and discussions with Umbrella Academy star Tom Hopper, Jason David Frank, known for playing the green Power Ranger in the classic 90s TV series, WWE icon Bret "The Hitman" Hart and The Walking Dead actor Chandler Riggs, to name a few.

Of course, no comic book convention would be complete without a cosplay competition. "The Cosplay Connect planet will feature the Virtual Masters competition in partnership with long term partner GES and incredible prizes sponsored by Brother. To win these prizes or be featured on our sites, Comic Con Africa is daring you to Cosplay and share your Cosplays on social media with the tags #ComicConAfricaOnline, #WeDareYouToCosplay and #BrotherAtYourSide," the press statement explains.

Online games, panels and free-to-play games can be found at the Tabletop Gaming planet. "The amazing folks at Easy Gaming Group have hustled the largest prize pool for any Magic: The Gathering tournament in Africa to date and Dum Dum Die is hosting midnight Dungeons & Dragons games for After Dark, along with awesome prizes from Unplug Yourself."

The Comics and Art planet will feature 36 international and local comic artists, illustrators and writers. "Battle Sketches, live draws, panels and Q&As will give insight into what it takes to be part of the industry."

There will be six quizzes throughout the convention, with topics ranging from Pokémon to Comedy Central and DC and hot prizes up for grabs.

Quizzes you want, Quizzes you will get! Get yourself and all your friends ready for the #ComicConAfricaOnline quizzes scheduled throughout the Con! Register now to make sure you're in - LINK IN BIO

An exhibition hall will also be available for fans to browse and purchase merchandise.

We live in a world where facts and fiction get blurred
In times of uncertainty you need journalism you can trust. For only R75 per month, you have access to a world of in-depth analyses, investigative journalism, top opinions and a range of features. Journalism strengthens democracy. Invest in the future today.
Subscribe to News24
Related Links
SA cosplayer crowned world champion after taking home the gold at Comic Con Africa
It's a wrap! 18 photos that capture all the epic action at Comic Con Africa 2019
I met William Shatner, explained to him what a braai is, and found out he might be going to space
Next on Channel24
From covering the story to falling in love with the killer - SA journalist opens up about Krugersdorp cult killings