Johannesburg – At a press conference held at Liliesleaf Farm on Monday, Miss World 2017 Manushi Chhillar was joined by Miss World 2016 Stephanie Del Valle and Miss World 2014 Rolene Strauss as she announced the launch of the first biodegradable, and 100 percent compostable, menstrual towel in South Africa.

The event formed part of the Nelson Mandela Centenary celebrations.

Speaking to The Juice, former Miss SA and Miss World Rolene Strauss told us about her support for the project. “It’s about educating young women about menstrual health, and then also providing them with the necessary menstrual pads, and this project is doing just that here in South Africa."

"It has been so successful in India, and as Miss South Africa entering Miss World, I also focused on bringing girls back to school,” she said, going on to explain: “So in South Africa a lot of girls drop out of school because they go through their menstrual cycles. My project’s name was Bringing Girls Back to School, and it’s really something that I’m passionate about,” she adds. 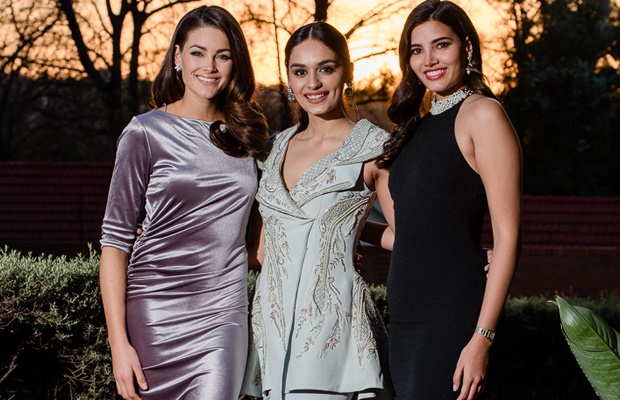 The woman behind the idea, reigning Miss World Manushi Chhillar, says it was her background as a medical student that helped her identify the need for menstrual health education in India, and in the long-run aided her in coming up with this idea.

“In [my] first year of college I realised that a lot of women came in with pelvic inflammatory diseases, and most of their history said that they had maybe used a dirty cloth or they did not practice proper menstrual hygiene methods. So that’s when I realised there is some work that has to be done,” she said.

Manushi says she first started by creating low-cost sanitary pads in India, and after winning the Miss World title had the idea of creating something which was biodegradable and 100 percent compostable.

“When we started our tour we came up with something new which was 100 percent compostable sanitary pads that also once you dispose the sanitary pads it has to be good for the environment, so these pads can be converted into manure,” she explained.

According to Manushi, over here in South Africa, the product will be made using banana fibers. “It’s the start of women equality, because Nelson Mandela was one of the first people who believed that menstrual hygiene was one of the three things that caused inequality between men and women,” she added. With Nelson Mandela Day around the corner, Rolene Strauss shared with us her advice on what people can do to give back, saying she understands that wanting to make a change can be intimidating at first.

She says: “It doesn’t have to feel like you have to change the whole world because then you feel like you can’t do it and you’d rather just do nothing. So start small, start in your community, start with your neighbours, and anything is everything.”

Related Links
Visual artist Trevor Stuurman to document Obama's visit to Kenya
Mzansi Magic on Somizi’s wedding: ‘We do not have a contract to broadcast his wedding’
A-Reece talks leaving Ambitiouz Entertainment on Behind The Story
Share
Next on Channel24
The Bachelor SA's Xia featured on British Vogue's Instagram feed