Banksy in Ukraine: How his defiant new works offer hope 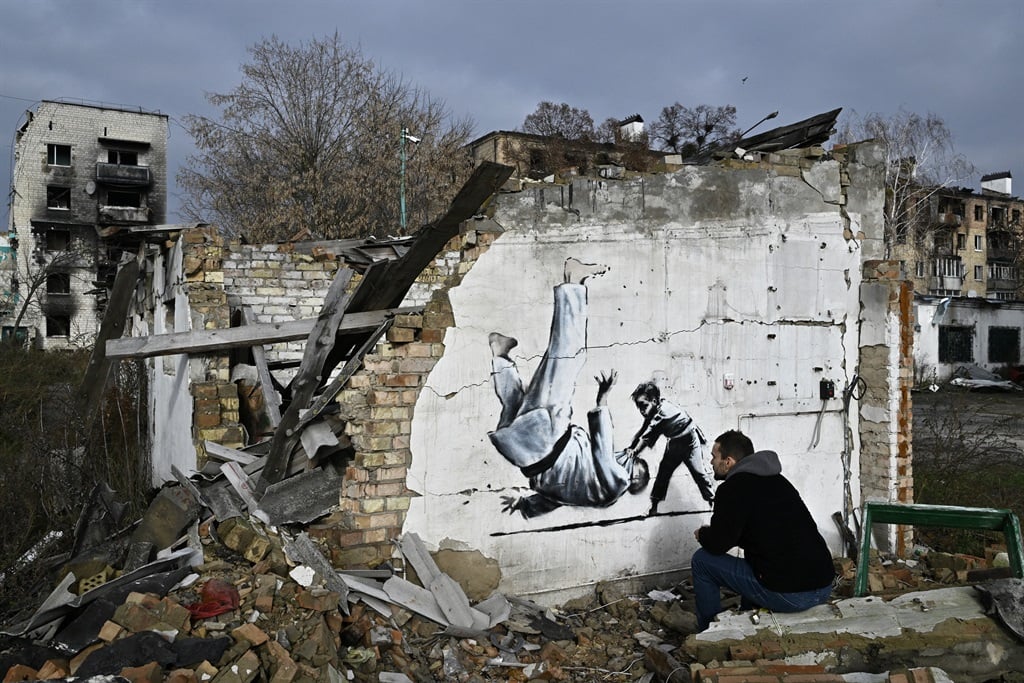 A local resident looks at a Banksy-style graffiti on the wall of a destroyed building, but its origin remains unconfirmed by the artist, in Borodyanka, near Kyiv on November 12, 2022.
Photo: Genya Savilov/AFP

Art, in all its forms, has always been a powerful means of representing, resisting and remembering war. And the Russo-Ukrainian War is no different, with artists responding powerfully to Russian aggression through an explosion of artwork drawing attention to, and reinforcing, the resilience of Ukrainian people and culture.

A stream of artwork has been posted on Instagram and Twitter. Some of the artworks represent grief and trauma, whereas others reflect "the fire of hope and defiance that comes with such tragedy."

International artists have also joined in the effort. On 11 November, graffiti artist Banksy posted a picture to his Instagram of a gymnast doing a handstand, painted on the side of a building devastated by shelling in Borodyanka, Ukraine. A local resident looks at graffiti made by Banksy on the wall of a destroyed building in Borodyanka, near Kyiv on November 12, 2022, amid the Russian invasion of Ukraine.
Photo: Genya Savilov/AFP

A few days later, Banksy confirmed that he was responsible for six other artworks in Kyiv and other cities across Ukraine, one of which appeared to take aim at Russian president Vladimir Putin, depicting him being thrown by a child in a judo match. It is not much of a stretch to interpret the child as a symbol of Ukrainian resistance.

Banksy's other works are shown in a video posted to Instagram (above) accompanied by a soundtrack of women singing Ukrainian folk music. They show children playing on a seesaw made from part of a tank, a bombed out transport truck, a man taking a bath and a woman in a dressing gown donning a gas mask and holding a fire extinguisher.

Ukrainian messages of thanks and solidarity were posted to Banksy's Instagram in response.

The destruction of culture and cultural heritage has been among the many alleged crimes committed by Russia in Ukraine. In July 2022, Unesco reported damage to over 164 cultural sites including religious sites, museums, historic buildings, buildings dedicated to cultural activities, monuments and libraries.

As with so many aspects of the war, this reverberates with the Yugoslav War, where the searing image of the destruction of the national library in Sarajevo and its two million books and artefacts in August 1992 was one of the most iconic of the war.

An early cultural casualty in Ukraine was the Babyn Yar memorial park in Kyiv, believed to have been directly targeted by Russian forces as part of an erasure of Ukrainian history and culture.

In response, Unesco committed to the protection of cultural property as a priority. That commitment was based on the conviction that: "Culture is an essential public good for society, and access to cultural life is a basic universal human right."

While art alone cannot change the dynamics or the course of the war in Ukraine, it can play an important role in reinforcing and demonstrating the resilience of cultural life. Whether or not it can also play a role in building peace and fostering reconciliation depends on its protection.

In September, Unesco announced a joint initiative with the Ukrainian NGO Museum of Contemporary Art "to encourage the continuation of artistic creation and access to cultural life in Ukraine".

The fund will initially disburse a total of US$100 000 (£84 000) from the Unesco Heritage Emergency Fund to support seven projects, with ten more to follow. The projects were selected from an open call and include residencies and support for displaced Ukrainian artists in Dnipro and Kharkiv.

Unesco described their support of Ukrainian artists as "vital for preserving artistic expression as a basis for social cohesion, community resilience, and our common goal – fighting for freedom and democratic values".

What role does art play in war?

All of this points to important questions about the role of art and the responsibility of artists in times of war, artistic representation of war and its horrors, art and the politics of resistance and the potential role of art in building peace and fostering reconciliation.

As historian Joanna Bourke observed in her book War and Art, art is intrinsically political, whether deliberately so or not. Artists make choices about how they represent war, often invoking "both the bitterness and the vulnerability of modern war".

Banksy's artwork in Ukraine draws our eye to the devastation wrought by the Russian invasion. By being painted on bombed out buildings, the images reflect how the experience of war disrupt the everyday, juxtaposing the mundane with the extraordinary – a woman in curlers and a dressing gown also wears a gas mask, children play on a tank trap seesaw. Local residents look at a Banksy-style graffiti on the wall of a destroyed residential building, but its origin remains unconfirmed by the artist, in Irpin, near Kyiv on November 12, 2022.
Photo: Genya Savilov/AFP

Banksy's intervention was warmly welcomed by Ukrainians, "hailed as a symbol of their country's invincibility" as part of a wider Ukrainian effort to leverage art as a powerful site of resistance and demonstration of resilience.

The extent to which art might be able to contribute to peace and reconciliation is a question for later on. It seems quite far removed from the grief, anger and defiance evident in much of the artwork created to date.

For now, as the response to Banksy’s artworks demonstrates, art in Ukraine serves as a site of expression, of solidarity and a symbol of resistance. As the Ukrainian government expressed, such works are not only "about blood, death, and destruction … but also – about love, support, and hope".