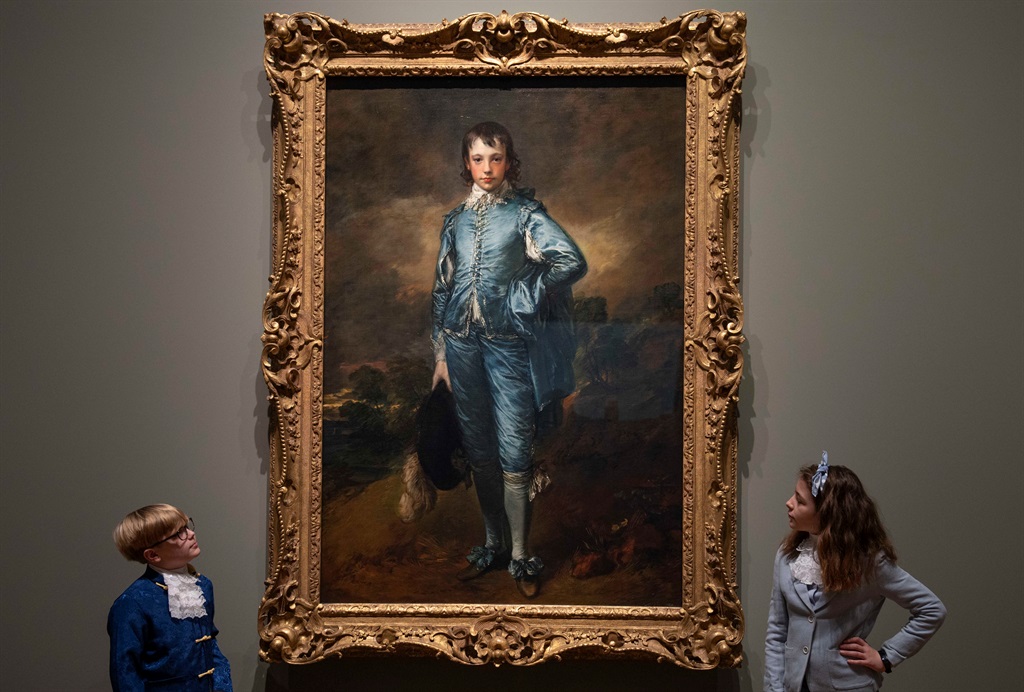 Children of National Gallery staff pose in front of The Blue Boy by Thomas Gainsborough at the National Gallery on January 24, 2022 in London, England. The painting was last publicly displayed in Britain 100 years ago and is on loan from the Huntington Gallery in San Marino, California, United States. (Photo by Stuart C. Wilson/Getty Images)

Thomas Gainsborough's 18th century painting The Blue Boy goes on show at London's National Gallery this week, 100 years after it was bought and shipped from Britain to the United States.

The portrait of a young boy dressed in blue is on display as part of an exhibition opening on Tuesday - 100 years to the day after it was last shown publicly in London.

The painting had hung at the gallery for three weeks in the winter of 1922 before crossing the Atlantic Ocean after it was bought by U.S. railroad magnate and art collector Henry E. Huntington from the Duke of Westminster.

"It is a remarkably beautiful picture, it's striking, it's moving, it's beautifully painted, it's enormously sort of romantic," Finaldi said of Gainsborough's 1770 work.

In order to show Gainsborough's passion for Anthony Van Dyck, The Blue Boy is on display along with a couple of the Flemish artist's works as well as two other paintings by Gainsborough.

"Van Dyck was very important for the consciousness of the history of Britain (and) also British painting...And so he (Gainsborough) dresses this anonymous young man, we're not quite sure who he is - in Van Dyck costume," Finaldi said.

The London exhibition marks the first time The Blue Boy has been loaned from the California-based Huntington Library, Art Museum, and Botanical Gardens.

We live in a world where facts and fiction get blurred
In times of uncertainty you need journalism you can trust. For 14 free days, you can have access to a world of in-depth analyses, investigative journalism, top opinions and a range of features. Journalism strengthens democracy. Invest in the future today. Thereafter you will be billed R75 per month. You can cancel anytime and if you cancel within 14 days you won't be billed.
Subscribe to News24
Next on Channel24
Vangelis, musical child prodigy who composed iconic Chariots of Fire score, has died