To ward off boredom and keep herself busy during lockdown, multimedia artist DuduBloom More has been cutting circles out of tiny scraps of paper to see if she can turn them into art pieces. Stuck in her room at home in Orlando Gardens, Soweto, she first cuts out the little circles out of red and black paper before pasting them onto each other, and then using thread to make circles around them.

The colours represent the shift in her mood from the darkness and uncertainty of self-isolation to the fiery passion with which she wants to be back in studio.

“It’s very therapeutic to me. It was a way to train myself to do work, to get the juices flowing again,” More says of the repetitive action of cutting and pasting, the making of dots, as we chat over Zoom.

Reminiscent of smaller versions of her large scale works, More says the putting abstract shapes together is a way for her to gather her layered, anxious thoughts.

She flips one of the tiny pieces of paper in her hand around, holding it up for me to see the patterns that the threads made at the back of the paper: “It’s not the circles that I am interested in but the patterns on the back. They are like little constellations.” 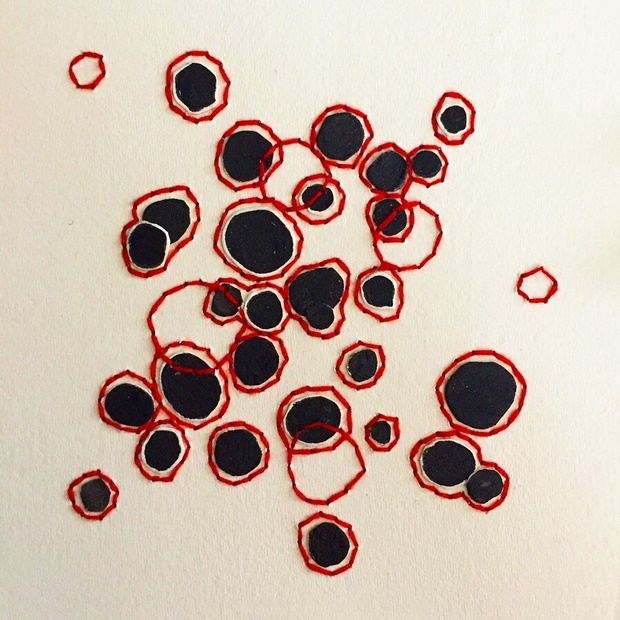 A star on the rise

Like the imaginary lines and patterns that make a constellation in the sky, More’s circles hang off the thin threads, sometimes packed tightly onto each other like fragile sculptures of confetti..

These threads produce patterns, each a little different, to More’s delight when she flips them over.

The 30-year-old, who considers herself to be a bit of a late bloomer in the art world, has already had quite an impressive career.

She left her accounting studies at the University of Johannesburg (UJ) to study art at Artist Proof Studios, where she graduated in 2018.

Since then her work has been exhibited at the FNB Joburg Art Fair as well as at the RMB Turbine Art Fair, the latter as a participant in their Talent Unlocked programme. More was working three jobs at the time.

“It was great but difficult because I was spreading myself too thin. I didn’t get to enjoy it. It was a tough time. But it was great to go through it.”

She had to balance her time in the studio with working her various part-time jobs including assisting at Artjamming  – an art project for adults and kids to learn to paint and draw.

She noticed that the pieces of cloth that people were using to blot out their paint-brushes all had unique patterns in different colours. She incorporated these into her artworks.

“Nobody made the blotches on purpose, so I wanted to take that incidental art and give it a voice. To say there is no wrong way to make art. I can see the beauty.”

Her experience working at Artjamming also provided her with the opportunity to observe relationship dynamics between adults and children. She says that some adults would want to control the direction of their children’s output in the workshops instead of allowing the young people to explore their own sense of creativity: “As adults we don’t nurture children. I took it back to myself and why I didn’t feel nurtured or why I only found my skill and confidence as an artist so late.” At the end of 2019, More was awarded the 2019 Cassirer Welz Award. The award is for emerging artists specialising in sculpture, drawing and painting.

The prize was a ten-week residency at the Bag Factory Artists’ Studios, where she created new work for her solo exhibition, Delicate / Tendency / Response, at Kalashnikovv Gallery earlier this year.

Unlike the smaller works she’s producing during lockdown, the exhibition was dominated by hues of orange and blue coming alive in the form of large scale artworks using material like ink, wool, thread, paper and more. The exhibition also included her diary style entries, on large canvas, that took her six months to complete.

More, who is represented by Candice Berman Gallery, says she wanted to explore the delicacy around people’s experiences and memories of trauma. She wanted to experiment with the ways in which our responses are triggered by certain words, certain smells, certain actions.

She says the blues and oranges are a response to memory and trauma, which need to be handled delicately whether one has healed from them or not.

For More getting the opportunity to work from one of the studios at The Bag Factory was a highlight as it allowed her to experience what being a full-time artist would be like.

In fact, before the corona virus made waste of her plans, it had been her mission to work towards being a full-time artist (with no part-time jobs) by the end of this year, a rarity for black women artists in South Africa. A late bloomer in the art world

Although she’s always liked to sketch and write, it took her a long time to eventually find the confidence to follow her artistic leanings.

But now that she has found it, More says she is not looking back.

She says she changed her name from Duduzile More to DuduBloom at the start of her career because she liked how her seTswana surname “More” had a double meaning in English and complemented the words DuduBloom.

“It was during those few months when I was still preparing my portfolio for art school. Some of my earlier drawings still say Dudu More,” she says.

“But at some point it is going to be Duduzile More. When it’s cemented that I am an artist, then I’ll be Duduzile, in my final form.”

*Written by Neo Maditla, a freelance journalist, editor and content strategist.
We live in a world where facts and fiction get blurred
In times of uncertainty you need journalism you can trust. For 14 free days, you can have access to a world of in-depth analyses, investigative journalism, top opinions and a range of features. Journalism strengthens democracy. Invest in the future today. Thereafter you will be billed R75 per month. You can cancel anytime and if you cancel within 14 days you won't be billed.
Subscribe to News24
Next on Life
OPINION | The Woman King is more than an action movie – it shines a light on the women warriors of Benin