An emotional Britney Spears scored a victory in her bid to end her father's control of her affairs Wednesday, as a judge ruled she could appoint her own lawyer to help end a guardianship that the pop superstar slammed as "cruelty".

Spears phoned back into a Los Angeles court, three weeks after her first explosive testimony in which she pleaded with a judge to free her from the years-long conservatorship that recently ramped up worldwide interest.

During Wednesday's hearing, Judge Brenda Penny accepted the resignation of Spears' previous attorney and signaled she would accept the 39-year-old's new choice, Mathew Rosengart, to represent her.

Rosengart told AFP on the sidelines of the hearing that he would file a petition "as soon as possible" to remove Jamie Spears as the conservator - and suggested the singer's father should simply step down.

"We will be filing a petition as soon as possible to move Mr Spears, subject to our formal retention," said Rosengart, a former federal prosecutor who has represented Steven Spielberg and Sean Penn.

"Why is Mr Spears not voluntarily stepping down?" Rosengart asked. "He does not belong in this conservatorship anymore. And we believe he should voluntarily step down immediately."

Spears, speaking to the court again via telephone, was at turns angry and upset - and used the occasional expletive - as she said she wanted to "press charges" against her father.

"I'm angry and I will go there," the singer said, even telling the court at one point she thought "they were trying to kill me".

"If the court doesn't see this as abuse... I don't know what is," said Spears, calling for "investigations" and a restraining order against her father.

Following the judge's ruling, Spears posted a video of herself performing cartwheels on Instagram, with the caption: "Coming along, folks ... coming along!!!!! New with real representation today ... I feel GRATITUDE and BLESSED!!!!"

She signed her post with the phrase adopted by her loyal fans: "#FreeBritney."

Spears, who rocketed to fame in her teens, suffered a highly public 2007 breakdown - when the shaven-headed star attacked a paparazzo's car at a gas station.

The following year, a California court placed her under a unique legal guardianship largely governed by her father, Jamie.

Spears swiftly returned to performing after that, released three albums, appeared on various television shows and even took up a Las Vegas residency.

But in January 2019, she abruptly announced she was suspending her performances until further notice.

And then last month, the singer made an impassioned plea for her situation to change, alleging that she had been prevented from having a contraceptive IUD removed, despite wanting more children, and forcefully put on medication that made her feel "drunk."

Spears said she had been made to perform shows under threat of lawsuit, and that she was not even allowed to get changed in privacy or drive her own car. 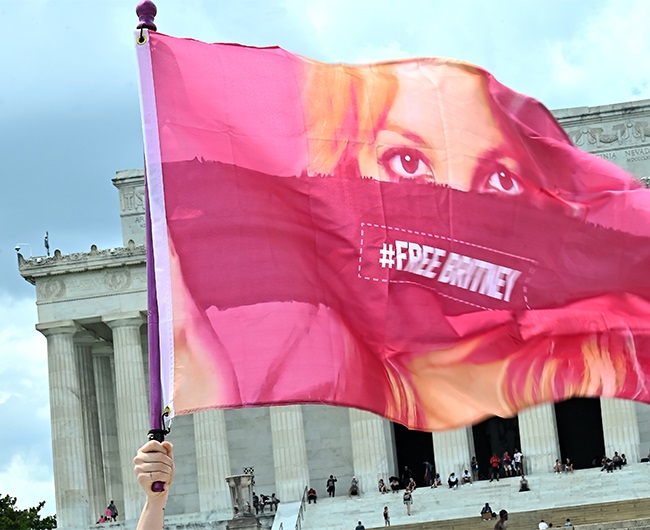 Signs at the #FreeBritney Rally at the Lincoln Memorial on 14 July 2021 in Washington, DC.
Photo: Shannon Finney/Getty Images

After that testimony Samuel Ingham, the lawyer appointed by court following her breakdown, asked to step down from his role.

So, too, did the financial management company that was set to assume joint control of Spears' estate with her father Jamie, who remains in place.

Penny accepted both those resignations Wednesday.

Spears has lots of public support, from fans chanting outside the courtroom - who greeted the news of her replacement lawyer with raucous cheers - to her musical peers Christina Aguilera and Madonna.

At a small demonstration on the Mall in the capital Washington, 34-year-old Patrick Thomas, head of the recently formed Free Britney America group, called the singer's situation "archaic".

"This is not just about Britney alone. This is about every other person who is trapped in one of these, what I would call a prison," said Thomas, whose group is pushing for a congressional hearing and federal oversight of conservatorships. 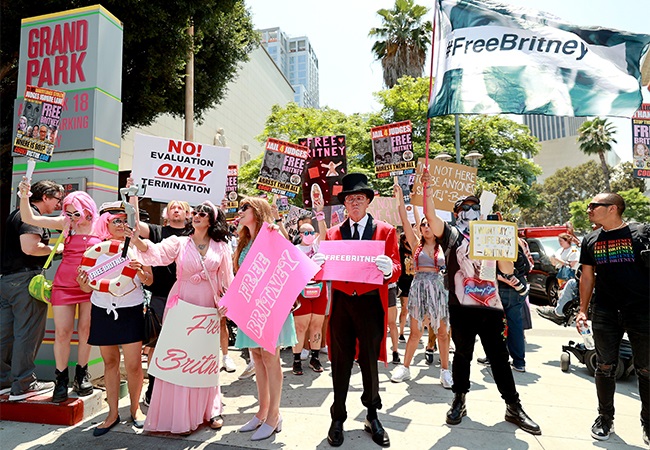 Penny's approval of Spears's new counsel, pending formal confirmation, is a major victory for the star.

She told the judge that she now wants the conservatorship to be terminated without having to undergo any more "stupid" psychological testing, but if tests would be required she would settle for the simple removal of her father from the system.

Jamie Spears' lawyer did not oppose the new attorney, but told the court that Spears' claim that her father is responsible for all the bad things that have happened to her is "the furthest thing from the truth".

Signaling he would not step down voluntarily, the attorney said Spears' father "has been there 24/7 for the past 13 years," and repeated a call for the court to investigate the singer's claims of abuse.

READ NEXT | #FreeBritney: Everything you need to know to join the movement

We live in a world where facts and fiction get blurred
In times of uncertainty you need journalism you can trust. For only R75 per month, you have access to a world of in-depth analyses, investigative journalism, top opinions and a range of features. Journalism strengthens democracy. Invest in the future today.
Subscribe to News24
Next on Channel24
'Person of interest' in YouTuber disappearance case has been missing for days, says family