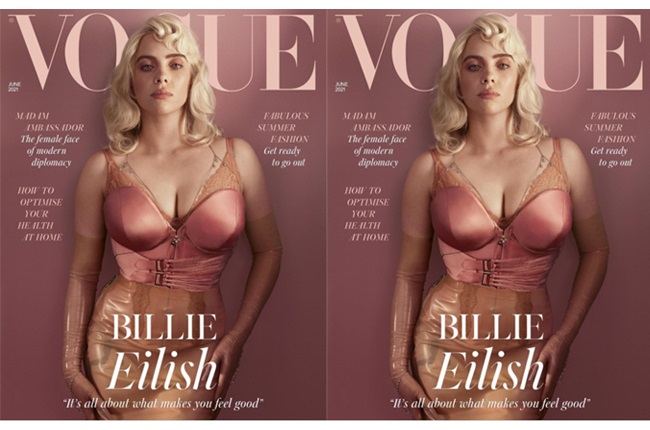 Billie Eilish is debuting a bold new look as she graces the cover of British Vogue's June 2021 issue.

Channel24 reported, after fans learned she was wearing a black and green wig to the Grammy's, the singer had dyed her hair platinum blonde, signalling a new album on the way. Now, with her "classic, old-timey pin-up" fantasy inspired by Betty Brosmer, Horst's illusionist beauty shots and the stockinged models of Elmer Batters, she's dressed in a custom-made corseted Burberry body and sheer Mugler stockings. Her transformation is complete.

"I've literally never done anything in this realm at all," she tells British Vogue's Laura Snapes. "Y'know, besides when I'm alone and shit."

The 19-year-old's chosen look has a message echoing that of her new single, which confronts abusers who exploit underage girls, and puts the onus on the viewer to consider their baggage.

"Don't make me not a role model because you're turned on by me," Billie explains, adding that her body "was the initial reason for my depression when I was younger", which only got worse with fame, hence, the baggy clothes.

People automatically made her an icon of body positivity and a good example for women when compared with female pop stars who wore less.

Now, she explains, predicting what some may take from the shoot: "'If you're about body positivity, why would you wear a corset? Why wouldn't you show your actual body?'"

We live in a world where facts and fiction get blurred
In times of uncertainty you need journalism you can trust. For 14 free days, you can have access to a world of in-depth analyses, investigative journalism, top opinions and a range of features. Journalism strengthens democracy. Invest in the future today. Thereafter you will be billed R75 per month. You can cancel anytime and if you cancel within 14 days you won't be billed.
Subscribe to News24
Next on Channel24
Amber Heard formally announces appeal of Johnny Depp defamation suit