An emotional Britney Spears on Wednesday called the 13-year-long conservatorship that has controlled her life stupid and abusive, saying she felt traumatised and angry and wanted her life back.

In a statement of more than 20 minutes, pop star Spears, 39, told the Los Angeles judge overseeing the arrangement that she wanted it to end.

"I'm traumatised... I'm not happy; I can't sleep," she said. Spears said her frequent upbeat postings on her Instagram account were lies. "I'm so angry. And I'm depressed. I cry every day," she added.

Spears delivered her remarks by phone, her first public statements about the court-approved arrangement that was first put in place in 2008 when she suffered a mental health breakdown.

She said she was forced into a mental health facility that cost her $60 000 a month after cancelling her planned Las Vegas shows in early 2019. She has not performed since late 2018.

Los Angeles Superior Court Judge Brenda Penny said she would need a petition submitted to the court asking for the conservatorship to be terminated before she could take any action.

Spears has never formally petitioned to have the arrangement terminated. Under terms of the conservatorship, she would have to demonstrate that she can take responsibility for her personal and financial affairs.

Penny praised Spears for speaking out. "I know it took a lot of courage," Penny said. "I just want to commend you again for really stepping forward and stepping out to have your thoughts heard, not only by myself but by everybody who has been involved in this case."

The last time Spears spoke directly to the judge was in May 2019, but the court was closed to the public, and her testimony was sealed. On Wednesday, the singer stated that she wanted people to hear what she had to say.

The former teen phenomenon said she wanted to get married again and have a baby. But she said she has a contraceptive device that she wants removed but is not allowed to go to the doctor "because they don't want me to have any more children."

Spears, who has been dating boyfriend Sam Asghari for five years, has 30% custody of her two children with her former husband, Kevin Federline.

Outside the courthouse, several dozen fans, many of them dressed in pink and holding "Free Britney" placards, rallied in support of the Stronger singer. 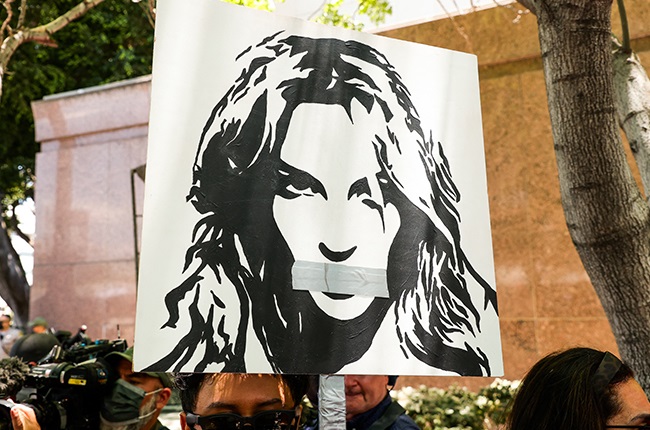 'It's embarrassing and demoralising'

Last year, Spears began the legal process to remove her father, Jamie Spears, from handling personal affairs ranging from her medical care to who visits her secluded villa outside Los Angeles. Jamie Spears also is a joint conservator of the singer's finances.

In a statement read out by his attorney on Wednesday, Jamie Spears said that he was "sorry to see his daughter suffer and in so much pain. Mr. Spears loves his daughter and misses her very much."

The singer, however, called her father "ignorant" and controlling. "He loved every minute of it, the control he had. He loved it," she said.

Spears complained that she had not been allowed to have her nails or hair done, or had a massage or acupuncture in a year.

"It's embarrassing and demoralising what I've been through," she said. "I feel bullied. I feel left out and alone."

During the conservatorship, the singer made a comeback in late 2009 and performed, released albums and went on world tours solidly until late 2018.

Details of her mental health issues have never been disclosed, but Spears said on Wednesday that doctors had put her on the drug Lithium and that she "felt drunk."

Spears also said that she would like to sue her family, "my own family doing interviews, and talking about the situation and making me feel so stupid."

The unusually long conservatorship has come under increasing scrutiny in recent years thanks to the fan-based #FreeBritney movement, a 2021 documentary, and a series of leaked court documents.

We live in a world where facts and fiction get blurred
In times of uncertainty you need journalism you can trust. For only R75 per month, you have access to a world of in-depth analyses, investigative journalism, top opinions and a range of features. Journalism strengthens democracy. Invest in the future today.
Subscribe to News24
Next on Channel24
Ruby Rose rushed to hospital after suffering 'serious' complications following surgery