Charlize Theron appeared on The Drew Barrymore Show on Thursday, excited to chat about the causes she holds close to her heart, while also opening up about dating.

"This is how @drewbarrymore and I greet each other every time," she wrote on Instagram, with a screengrab of the two stars. "Congrats on this incredible new show," she added, "you continue to bring joy and happiness to the world. Love you lady."

This is how @drewbarrymore and I greet each other every time. Thanks for having me on @thedrewbarrymoreshow and talking @ctaop, #TogetherForHer, and life in general! Congrats on this incredible new show - you continue to bring joy and happiness to the world. Love you lady ??

During their conversation, The Old Guard star got candid about not having seriously dated for "over five years".

"I'm open when friends of mine are like, 'You should go on a date, you should meet this guy'," she said, adding that she feels though that "[she's] in a place in [her] life where you have to come with a lot of game".

"I can honestly say this, on my life, I don't feel lonely.

"Once I had my children, it's not that it replaces something, or that it makes you less interested in something else," she said of her daughters, Jackson and August.

She added: "I'm still firing on all cylinders. I just think your priorities are in a place that is of high demand; it's a lot of work to be a parent. Part of that is at the end of the day I get to bed and I think, 'Oh my God, I wouldn't want this day to be any different'. "

The Charlie's Angels star said she could relate, and said: "I always say I would want someone to be an addition, if not the equation, and never a subtraction."

We live in a world where facts and fiction get blurred
In times of uncertainty you need journalism you can trust. For only R75 per month, you have access to a world of in-depth analyses, investigative journalism, top opinions and a range of features. Journalism strengthens democracy. Invest in the future today.
Subscribe to News24
Related Links
Enrique Iglesias and Anna Kournikova have been together for 19 years! See their adorable 3 kids
Michelle Obama's brother recalls 'heartbreaking' childhood incident
Next on Channel24
Brian May thinks his heart attack could have been caused by coronavirus 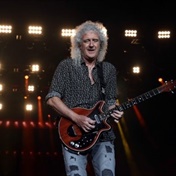