Did Kanye West attend the Met Gala alongside Kim Kardashian? Kim Kardashian turned heads at the 2021 Met Gala when she showed up in an all-black, faceless look.

The outfit saw the reality star in a full-body get-up featuring a black face covering, catsuit, train and jersey boots; all that was exposed was her long ponytail.

Accompanying Kim was a man on her arm, in a matching black sweatpants and a hoodie, slippers, with his face obscured as well.

With his look reminiscent of ones Kanye West would wear, fans couldn't help but wonder if he'd walked the red carpet with his ex, after rumours the two are considering reconciling. 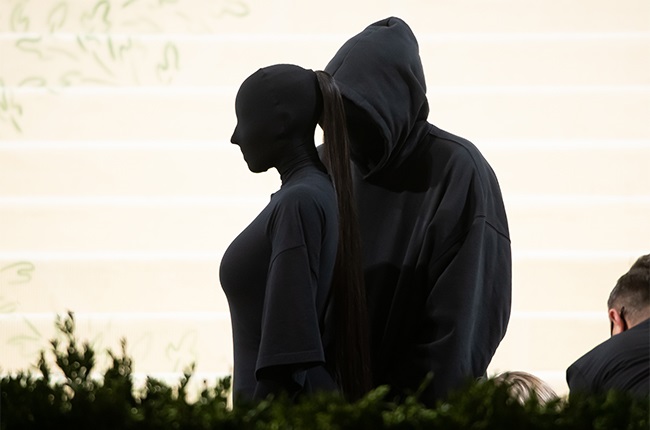 According to E! News, the masked man was none other than Demna Gvasalia, the creative director of Balenciaga, who designed Kim's iconic look.

Days before, the beauty mogul stepped out in a similar leather Balenciaga look, and did the same when she attended one of Kanye's Donda listening parties.

A source tells E! Kanye's "presence will be felt on the carpet". "It was him who introduced Kim to Demna and was instrumental in the newly formed relationship between her and Balenciaga."

Of Kim's new fashion era, they add: "This look on Kim is like a new subculture and fashion statement. No logo, no face, but everyone knows it's her."

We live in a world where facts and fiction get blurred
In times of uncertainty you need journalism you can trust. For only R75 per month, you have access to a world of in-depth analyses, investigative journalism, top opinions and a range of features. Journalism strengthens democracy. Invest in the future today.
Subscribe to News24
Next on Channel24
Britney Spears' fiancé reacts to Netflix's upcoming doccie Britney vs Spears