After three years on the road Ms. Hud and I started hankering for a tad more domesticity—cleaner sheets, a full kitchen, and some more water pressure sounded like Shangri-la, so I decided to rent a two-bedroom house in the sleepy little neighbourhood of Tarrytown, in the heart of Austin, Texas.

Besides the autumns and going to college there, I liked Austin because it always let me be myself. It’s really the secret to why Austin is so cool; all you have to be in Austin is you, and Austin appreciates it when you are.

It’s never needed proof of me in a picture, it’s always just been happy to see me. Tarrytown was the kind of neighborhood where dogs ran off the leash, kids could chase a ball into the street without looking for oncoming cars, and grandparents hadn’t changed their address since they were born there. I had a garden to tend to, a one hitter to hit before I did, and my alma mater’s football season to watch. Live.

It was late Saturday afternoon in Darrell K Royal Memorial Stadium when my eighteenth-ranked Texas Longhorns had just beaten the undefeated and number-three nationally ranked Nebraska Cornhuskers 24–20, handing the Huskers their only defeat of the season. The city was on fir and so was I. It was time to celebrate.

I partied through the night into Sunday, and through Sunday night without sleeping a wink. At 2:30 that Monday morning, I finally decided to wind down. It was time to lower the lights, get undressed, open up the window, and let the jasmine scent from my garden come inside. It was time to smoke a bowl and listen to the beautiful African melodic beats of Henri Dikongué play through my home speakers. It was time to stand over my drum set and follow the rhythm of the blues before they got to Memphis, on my favorite Afro-Cuban drum born of ceremony and speaking in tongues, the congas.

For me, the congas, bongos, and djembe have always been the purest and most instinctual instruments. No sticks, no electricity, no equalizer, no strings, no tools or amendments, just skin to skin with the most analogue spoken language, prayer, and dance known to man—the percussion. The root of music, from the roots of music, Africa. It was time to lose my mind in it, take flight into the haze, and slip into the dream. It was time for a jam session.

What I didn’t know was that while I was banging away in my bliss, two Austin policemen also thought it was time to barge into my house unannounced, wrestle me to the ground with nightsticks, handcuff me, and pin me to the floor.

"Ohhh, looky who we got here," the ’roided-up cop with a crew cut, who looked like a Nebraska Cornhusker himself, said as he read the driver’s license he picked up off my coffee table.

Then he picked up the bong. "And looky what we got here. Mr. McConaughey, you are under arrest for disturbing the peace, possession of marijuana, and resisting arrest," he proudly stated while squatting atop me, knee in my back.

"Fuck you, motherfucker! You broke in my house! Fuck, yeah, I resisted!"

"That’s enough!" he grunted, then wrangled me to my feet. "We’re takin you downtown."

The other officer, the more civil one of the two, grabbed a blanket off the couch and moved to wrap it around my body.

"Ohhhh no!" I barked. "I’m not putting shit on! My naked ass is proof I was mindin my own business!"

They escorted me out of my house through the courtyard entry on the way to the street. Still naked and reluctant to submit to the inevitability of my predicament, I got relative, and decided it would be a clever idea to run up the walls left and right of the gated passageway and do a somersault backflip over the Cornhusker cop who was guiding me from behind.

My thinking was that in mid-flight, while upside down in the air, I would assume a pike position and then slide my cuffed wrists under my butt and up and over my legs, then stick the landing behind the Cornhusker, now with my fettered hands in front of me. My rationale at the time was that after pulling off such an extraordinary Houdini-like stunt, the officers would be so impressed that they would abrogate the arrest and set me free. I know, stupid, but remember, I’d been celebrating for thirty-two and a half hours straight.

Whether my plan of action was physically possible or not, I’ll never know. It didn’t happen. Instead, before I’d taken three steps up the wall, the Cornhusker body slammed me back down onto the brick footpath. 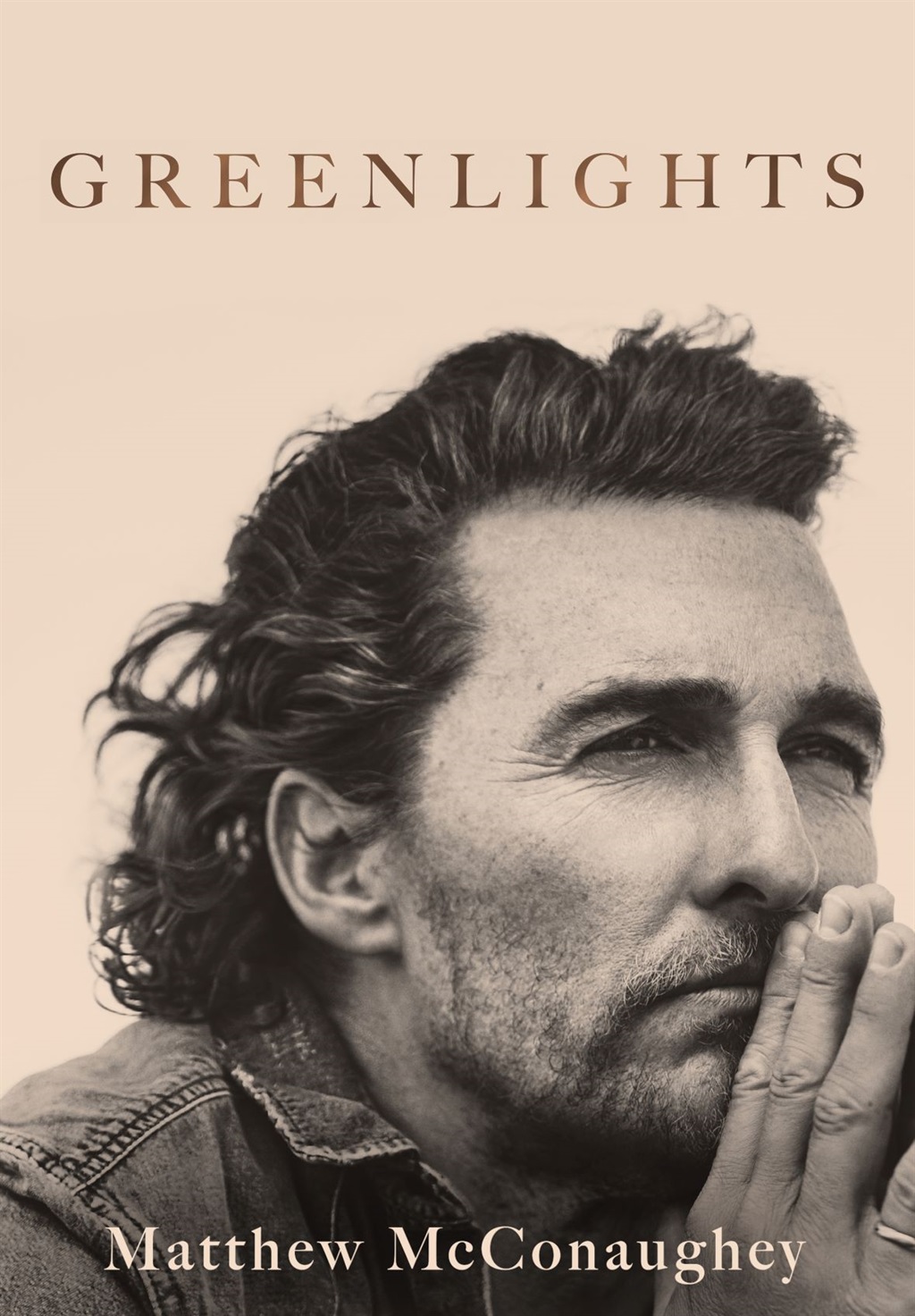 The cover of Greenlights by Matthew McConaughey.

Meanwhile, word must have spread over the police scanner as to just who had been arrested because there on the street were six lit-up cop cars and about forty of my neighbors.

"Sure you don’t want this blanket?" the civil cop asked again.

"Hell no, this is PROOF of my innocence!!" I yelled to everyone on the block and one more over.

They lowered my head, put me in the back of the patrol car, and drove me to the precinct. After we landed and I declined the third offer to wear the blanket, we headed up the steps toward the entrance of the Austin Police Department.

At the double doors to admissions, a six-foot-six, 285-pound, tatted- up, working inmate greeted me just outside the entryway. He was holding a pair of men’s orange institutional pants. Before he could say a word, I said, "Proof of my innocence, man."

He just looked at me, seeming to understand but knowing better.

"We all innocent, man. Trust me, you do wanna put these on."

Maybe it was his honest eyes or the fact that he was a fellow offender, or maybe it was the sudden realization that, when a six-foot, six-inch jailbird built like a brick shithouse tells you You do wanna put on some pants before you go in the clink, it’s probably best to listen.

He dropped to his knees, opened up the pant legs, and shimmied the prison cottons up my shanks until the elastic waistband was around mine; then, I headed for the pokey.

At 9:30 A.M., my thirty-two-and-a-half-hour buzz now turned hangover, I was sitting in the corner of the cell when two people showed up on the other side of the bars.

"I don’t know how in the hell a disturbing the peace call escalated into a class A misdemeanor of resisting arrest and a class B misdemeanour of possession of less than two ounces of marijuana," the judge said, "or why two of our police officers forcibly entered your home without fair warning. I am going to dismiss the disturbing the peace and possession misdemeanors and give you a personal recognizance bond on the resisting arrest. I don’t understand or agree with how this situation escalated."

"Well, Judge Penny, I’m not sure what that all that means, but I don’t either," I said.

Joe Turner, who was the same attorney who successfully defended Willie Nelson years earlier in a possession case, spoke up. "Judge, we all agree that this situation got out off hand very quickly, but you also gotta understand that these policemen literally broke into this man’s house while he was playing some bongos in his birthday suit! The resisting arrest was self-defense! I suggest you dismiss it altogether and my client will plead to the class C violation of a sound ordinance as he was indeed bangin on those bongos pretty damn loud for 2:36 in the morning."

Joe pulled out his wallet, grabbed a fifty-dollar bill, waved it in my face, then looked at me and said, "Means I’ll pay your get-out-of-jail fee and you owe me fifty bucks, you’re free to go. I got a car waitin for ya at the back entrance or you can meet the press out front, there’s plenty of em waitin. Here’s a bag of fresh clothes your neighbour dropped off for ya."

I thanked them both, got dressed in the lavatory, splashed my face with cold water, and tried to breathe out the blues that were starting to set in. Why the blues, you ask? Well, obviously I was lucky, walking out of jail only $50 poorer—this didn’t happen to everyone who got hauled in on charges like resisting arrest and marijuana possession. The problem was, as I’ve said, in my family, we didn’t get in trouble for committing the crime, we got in trouble for getting caught. I wasn’t raised to end up in jail, for anything or any amount of time, and even though my offense was one I’d committed many times before and would many times more, I got caught, and for that, I felt guilty. Outlaw logic.

Looking for some fearless consolation, I decided to call my mom before I chose which way to leave my   first prison stint. Maybe it was the fact that while I was sure she would have no mercy for my circumstance, at the same time I knew she would pour a drink and toast to how it was I got into it. Was it going to be her that answered or was it going to be that new groupie fan? I didn’t know. Turns out it was both.

"They what, Matthew?! Broke into your house!? Those son of a bitches, you keep your head up," she said. "There is nothing wrong with smokin a little fun stuff and playing your drums naked at night in your own home; who do they think they are comin in your house like that?!"

Just what I needed. I hung up and decided to stride toward the media mob out front instead of sneaking out the back.

Two days later, BONGO NAKED T-shirts were all over Austin.

READ NEXT: The book behind the Netflix hit The Queen's Gambit - Read chapter one here

We live in a world where facts and fiction get blurred
In times of uncertainty you need journalism you can trust. For only R75 per month, you have access to a world of in-depth analyses, investigative journalism, top opinions and a range of features. Journalism strengthens democracy. Invest in the future today.
Subscribe to News24
Related Links
Prince Philip reportedly has a 'library' of books on UFOs and aliens
Miley Cyrus on love, letting go, and writing children’s books to teach kids about drugs and alcohol
BOOK EXTRACT | Chasing the Light - Oliver Stone
Next on Channel24
Inside Jason Momoa and Lisa Bonet's sudden split