Jennifer Garner's kids reveal scary impact of paparazzi: 'I'm scared of them – they look like guns' In a rare interview on PBS' Tell Me More With Kelly Corrigan, Jennifer Garner got candid about the impact the paparazzi has had on both her kids – and her marriage.

The actress shares children, Violet, Seraphina and Samuel with Ben Affleck, and says the paparazzi has been hounding the famous family for ten years.

The A-Lister said the paparazzi would get so bad they would run through red lights to chase after her and her kids while they were driving and cause accidents.

In 2013, however, the mother-of-three, along with a few other celebs including Halle Berry, testified in California in support of a bill to criminalise photographers taking photos of children without their legal guardian's permission, reports E! News, and won!

One of Jen's daughters also gave a speech at the time. "'I'm scared of them,'" the Peppermint star recalled her daughter saying of paparazzi with their cameras. "'They look like guns.'"

The 48-year-old also went on to talk about the pressure the media put on her relationship with Ben Affleck.

"I think there's something about seeing yourselves reflected in news of some kind—and whether it's true or not. If it's true and you are starting to be serious with someone and they start saying, 'Well, when are they gonna be engaged?' it's almost like you just want to get there so that you can complete that and just maybe it will die down for a second," she said.

"You're always kind of chasing peace, and because it's already been in print it feels like it's a done deal already, whatever it is... And then it's immediately, 'Trouble in paradise.' And it becomes almost a self-fulfilling prophecy."

We live in a world where facts and fiction get blurred
In times of uncertainty you need journalism you can trust. For only R75 per month, you have access to a world of in-depth analyses, investigative journalism, top opinions and a range of features. Journalism strengthens democracy. Invest in the future today.
Subscribe to News24
Related Links
Mark Ruffalo and Robert Downey Jr. defend Chris Pratt after he's voted the worst Chris in Hollywood
The sex tape, the OJ trial and more – a sneak peek at Kim Kardashian's tell-all with David Letterman
Next on Channel24
Jennifer Lopez strips down for naked cover art for new song 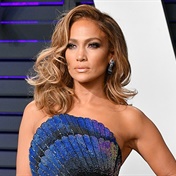