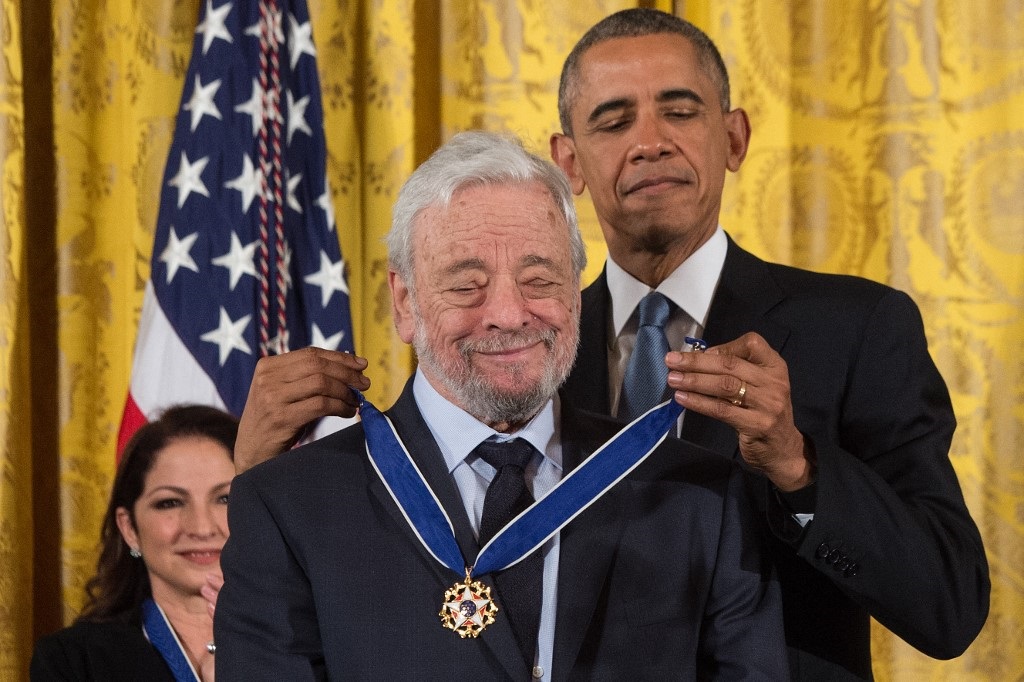 In this file photo taken on November 24, 2015 US President Barack Obama presents the Presidential Medal of Freedom to theater composer and lyricist Stephen Sondheim at the White House in Washington, DC.
Nicholas KAMM / AFP

Sondheim -- a lyricist and composer known for works including West Side Story and Sweeney Todd -- died suddenly in his Connecticut home the day after celebrating Thanksgiving with friends, his attorney F. Richard Pappas said.

The publicist for the ongoing Broadway production of Sondheim's musical Company at the Bernard B. Jacobs Theatre, Rick Miramontez, confirmed the news to AFP.

"We have lost the Shakespeare of musical theatre," said Marianne Elliott, the director of Company, in a statement shared on the production's Twitter page.

A message from our Director, Marianne Elliott. pic.twitter.com/noEyTASnOw

Before the show, Elliott and the cast took to the stage to join the audience in a standing ovation for the songwriter.

Outside the theatre, one attendee wrapped up against the cold of a New York November, Mike Morris, said: "It's the end of an era. This is a person who revolutionised American musical theater."

"He's going to be remembered for hundreds of years," he added.

Explaining what made the songwriter so good, director Elliott told AFP: "He never wrote a note, he never wrote a word, that didn't mean something psychologically.

"So all his meaning is in the melody of the song, as well as in the lyrics of what they're actually singing. And that's why he's like Shakespeare, because you can follow the rhythm or you can hear it and you feel instinctively he's telling you something about the character."

Born on March 22, 1930 in New York City, Sondheim was involved in musical theater from an early age, even though both of his parents worked in the fashion industry.

He started playing piano at age seven and was family friends with Oscar Hammerstein II, half of the famed musical theater writing duo Rodgers and Hammerstein.

Sondheim's first professional writing job was for the television comedy Topper in the 1950s. He also wrote crossword puzzles for New York Magazine from 1968 to 1969, which contributed to his writing style and sense of theatrical misdirection.

His breakthrough on Broadway came with West Side Story in 1957, quickly followed by Gypsy two years later.

West Side Story was adapted into a film twice, first in 1961, starring Rita Moreno. The second, due to be released in early December, stars Ansel Elgort and newcomer Rachel Zegler.

Throughout his more than five-decades-long career, Sondheim won eight Grammy awards, eight Tony awards -- including the special Lifetime Achievement in the Theatre -- one Academy Award and a Pulitzer. He was nominated for many more Grammys and Tonys, as well as two Golden Globes.

As well as Company, his play Assassins, has also been revived on Broadway this fall.

In 2015, then US president Barack Obama presented Sondheim with the Presidential Medal of Freedom, the nation's highest civilian honor, for his life's work.

Sondheim's repertoire includes much-loved shows such as A Funny Thing Happened on the Way to the Forum and Into the Woods.

In 2017, Sondheim married his partner Jeffrey Romley, who survives him.

"Thank the Lord that Sondheim lived to be 91 years old so he had the time to write such wonderful music and GREAT lyrics!" tweeted singer Barbra Streisand.

Thank the Lord that Sondheim lived to be 91 years old so he had the time to write such wonderful music and GREAT lyrics!  May he Rest In Peace???? ???? pic.twitter.com/vshNSdkvpQ

"Thank you for everything Mr Sondheim," tweeted Broadway actor Aaron Tveit, who recently won the Tony for best actor. "We are so lucky to have what you've given the world."

"We shall be singing your songs forever. Oh, my heart hurts," she wrote on Twitter.

Rest In Peace, Stephen Sondheim, and thank you for your vast contributions to musical theater. We shall be singing your songs forever. Oh, my heart hurts…

"There are no words. He had them all. And the music. He was incomparable," the UK-based Stephen Sondheim Society, which is dedicated to promoting and studying his work, tweeted along with three heart emojis, one of them broken.