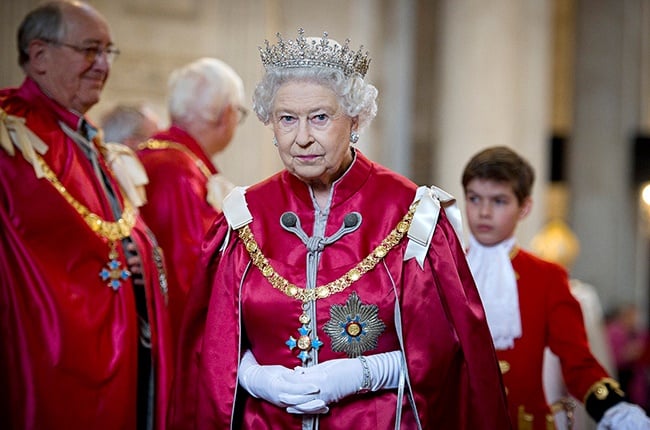 Considering Queen Elizabeth is the longest-reigning British monarch in history, we all know Her Majesty, The Queen has unprecedented power. Still, you'd probably be surprised by just how much power she holds in her crown and sceptre.

From the UK to Australia, and over all the fish in the English sea, here are five interesting and totally bizarre things you probably didn't know about the power of the British monarchy.

If the Beyhive approached the monarch, they could potentially convince her to make Beyoncé's title official – in case you didn't know, Queen Elizabeth has the power to give just about anyone a title. She can also appoint ministers and members of parliament though, according to Reader's Digest.

The queen is also responsible for officially opening parliament every May by wearing the Imperial State Crown and giving a formal address to both Houses of Parliament at the Royal Gallery at the Palace of Westminster.

A few other things Queen Elizabeth can issue whenever she so pleases include: passports and driver's licences – even though she doesn't require one herself.

You may have seen images of the queen driving around Buckingham Palace in her Range Rover – her dookie and glasses just visible above the steering wheel. But according to HELLO!, by the power of the "royal prerogative", while driver's licences are issued in the queen's name, she's not required to have one, nor is she required to have a licence plate on her car.

The queen loves driving too, even famously taking Saudi Arabia's Prince Abdullah around her country estate when he came for a visit.

According to Business Insider, former British ambassador, Sherard Cowper-Coles recalled the incident in 1998 saying, "As instructed, the crown prince (at the time) climbed into the front seat of the front Land Rover, with his interpreter in the seat behind. To his surprise, the queen climbed into the driving seat, turned the ignition and drove off."

Sherard explained that at that time, women were not yet allowed to drive in Saudi Arabia. "Abdullah was not used to being driven by a woman," he recounted, "let alone a queen."

You may not know that although Australia is an independent country, it still forms part of the Commonwealth Nations. This means, technically, Queen Elizabeth is also the Queen of Australia and has the power to intervene whenever she sees fit.

In 1975, she had no choice when the Australian government found themselves at a deadlock over a budgetary issue, The Washington Post reports. There was a complete shutdown until Queen Elizabeth intervened in the form of an official representative (one she probably appointed herself) who dismissed the then prime minister, appointed another, who immediately passed the bill.

The Queen then fired the rest of Parliament for elections to be reheld and new officials to be chosen to govern.

The Australian government hasn't had a shutdown since. Fancy that.

4. The swans, the dolphins and all the "royal fish" in the sea

Back in the 13th century, swans were considered a commodity to be eaten and enjoyed by only a select few who could afford them. Soon after, the majestic birds on and around the River Thames became a symbol of the British royal family, and according to medieval legislation, is owned by the Queen herself if the Dyers or Vintners don't claim them, reports Reader's Digest.

Now, we're sure very few people replace their sausages in their bangers and mash with swan these days, but the queen ensures the conservation of the birds every year anyway with Swan Upping.

According to TIME, the queen also owns all the sturgeons in and around UK waters as per a 1324 statute that was never repealed. These sturgeons include whales and dolphins and are referred to as "royal fish".

While not very many have been granted recently, Queen Elizabeth, as part of her royal prerogative, can give criminals a "royal pardon". Originally it was brought into effect to counter the death penalty, although the queen did use it to pardon Alan Turing in 2013 – his story was turned into the film, The Imitation Game, a year later.

Alan Turing was a mathematician thought to have significantly contributed to ending World War II, when he cracked the Enigma codes used by German U-boats. But despite his work, he was convicted of gross indecency for having a relationship with a Manchester man, BBC explains, for which he was castrated. Alan later committed suicide.

In 2013 the Queen used her power to posthumously pardon the codebreaker, and Alan has since been recognised for the man he indeed was – "a hero".

READ NEXT: 5 stunning examples of Queen Elizabeth's wicked sense of humour and her subtle skill of throwing shade

We live in a world where facts and fiction get blurred
In times of uncertainty you need journalism you can trust. For only R75 per month, you have access to a world of in-depth analyses, investigative journalism, top opinions and a range of features. Journalism strengthens democracy. Invest in the future today.
Subscribe to News24
Related Links
5 stunning examples of Queen Elizabeth's wicked sense of humour and her subtle skill of throwing...
The queen spotted for the first time since lockdown started, riding a pony
'A long deployment at sea': The extreme precautions staff take to protect the queen amid Covid-19
Next on Channel24
Prince William begs Kate not to get 'any ideas' about baby no. 4