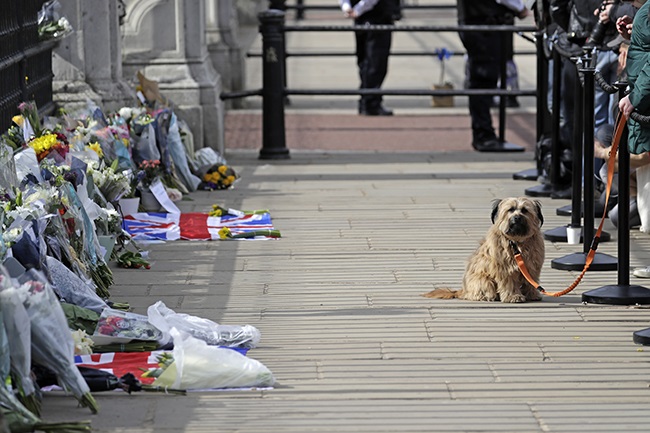 A dog sits near the floral tributes outside of Buckingham Palace on 9 April 2021 in London, United Kingdom. (Photo: John Phillips/Getty Images)

Individuals and groups of people, some of them families with young children, gathered to see the formal announcement pinned to the palace gates.

Single daffodils were threaded through the black railings. Others left bouquets of flowers and Union Jack flags on the pavement, as bright spring sunshine turned to clouds overhead.

But, Britain's government asked the public not to gather outside or lay flowers at royal residences following the death of Prince Philip.

"Although this is an extraordinarily difficult time for many, we are asking the public not to gather at Royal Residences, and continue to follow public health advice particularly on avoiding meeting in large groups and on minimising travel," a Cabinet Office spokesman said.

"We are supporting the Royal Household in asking that floral tributes should not be laid at Royal Residences at this time."

Outside the palace uniformed police walked through the groups of people, quietly reminding people about social distancing rules to stop the close-contact spread of the coronavirus.

Covid restrictions, which are gradually being lifted across the country, meant crowds were thinner than would normally be expected for such a major royal event.

But some people still felt duty bound to pay their formal respects.

"It's an honour to be here for Prince Philip," said one woman, who gave her name only as Sandra.

"He is the epitome of service and commitment to his country. He was an important world figure and it's nice to see so many people have come out.

"He was the patriarch of one of the strongest families in the world. I think this is a pivotal moment for the royal family the Queen has relied on him and I don't think they will have realised the size of this loss."

From the archives | Prince Philip through the years

Prince Philip was a painter - and four other forgotten facts