FEEL GOOD | Millions in the UK (including Prince George, Charlotte and Louis) unite in national applause to thank healthcare workers amid coronavirus 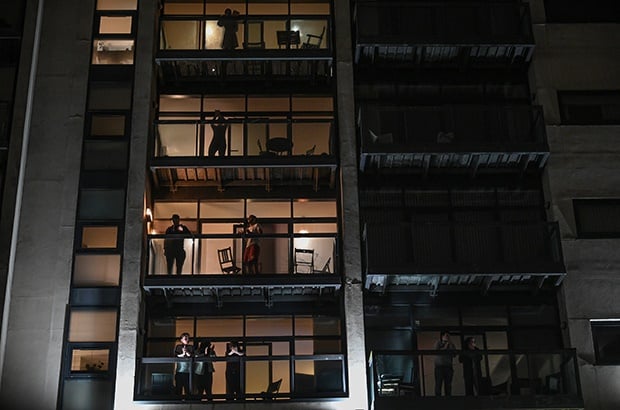 'Clap for our carers' was the message sent all around the UK on Thursday by Annemarie Plas.

She told BBC, "I hoped it would create a positive boost for those on the frontline.

"But also, for tonight, at 8 pm, and you hear your neighbours applauding, that you also know that we’re all together in this."

With the UK on lockdown, people stood on their front porches, stepped out on their balconies and peered out the windows, confident in knowing they’re not alone when they heard the applause.

WATCH A VIDEO OF THE SPECIAL MOMENT HERE:

The royal family joined the millions of people thanking the National Health Service (NHS) for their hard work during to fight the coronavirus.

Kensington Palace, the Instagram account of the Duke and Duchess of Cambridge, wrote alongside a video of Prince George, Princess Charlotte and an all-grown-up Prince Louis clapping, "To all the doctors, nurses, carers, GPs, pharmacists, volunteers and other NHS staff working tirelessly to help those affected by #COVID19: thank you."

To all the doctors, nurses, carers, GPs, pharmacists, volunteers and other NHS staff working tirelessly to help those affected by #COVID19: thank you. #ClapForOurCarers #ClapForCarers #ThankYouNHS #ClapForNHS

The queen’s message read, "We are enormously thankful for the expertise and commitment of our scientists, medical practitioners and emergency and public services,""  while outside Windsor Castle, where Her Majesty is currently staying with Prince Philip, loud cheers and applause could be heard.

Prince Charles and Camilla joined in as well, while His Royal Highness is recovering after testing positive for the Covid-19 virus.

Doctors, nurses and healthcare workers everywhere could listened to the UK give thanks on Thursday night, with the NHS tweeting shortly after, "That was emotional."

We live in a world where facts and fiction get blurred
In times of uncertainty you need journalism you can trust. For 14 free days, you can have access to a world of in-depth analyses, investigative journalism, top opinions and a range of features. Journalism strengthens democracy. Invest in the future today. Thereafter you will be billed R75 per month. You can cancel anytime and if you cancel within 14 days you won't be billed.
Subscribe to News24
Related Links
UPDATE: Camilla remains 'upbeat' and Prince Charles has spoken to both Prince William and Prince...
Prince Charles tests positive for coronavirus
Queen Elizabeth goes into self-quarantine
Next on Life
Prince Harry, Elton John and more launch legal action against Daily Mail publisher, law firm says