Prince Philip has died. He was 99 years old.

The Duke of Edinburgh was hospitalised in February and, after four weeks, returned home to Windsor Castle where he was self-isolating with the queen amid the coronavirus pandemic.

"It is with deep sorrow that Her Majesty The Queen announces the death of her beloved husband, His Royal Highness The Prince Philip, Duke of Edinburgh," the announcement reads.

"His Royal Highness passed away peacefully this morning at Windsor Castle."

The statement continues: "Further announcements will made in due course. The Royal Family join with people around the world in mourning his loss."

ALSO READ: From the archives | Prince Philip through the years 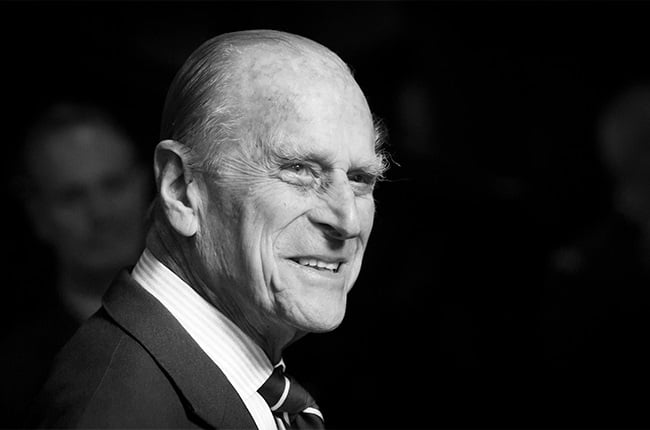 Philip was born into the Greek and Danish royal families, but after being educated in France, Germany, and the United Kingdom, joined the British Royal Navy in 1939 at the age of 18.

He started corresponding with the then Princess Elizabeth in 1939 and the couple went on to marry in 1947 with the blessing of King George VI, and welcome heir to the throne, Prince Charles, Princess Anne, Prince Andrew and Prince Edward.

Before the official announcement of their engagement was made, he abandoned his Greek and Danish titles and styles, became a naturalised British subject, and adopted his maternal grandparents' surname, Mountbatten.

When Elizabeth ascended the throne in 1952, he left active military service after having reached the rank of commander. King George granted him the style His Royal Highness and created Duke of Edinburgh, Earl of Merioneth and Baron Greenwich for Philip, but in 1957 he was made a British prince.

Announcing his passing, BBC television played the national anthem over a picture of Philip in his prime, dressed in military dress uniform

Philip, who was by the queen's side for nearly eight decades, retired from public duties in 2017 at the age of 96.

The death of the Duke of Edinburgh is a profound loss for the 94-year-old monarch, who once described him as her "strength and stay all these years".

ALSO READ: Prince Philip the silent stalwart behind the queen

We live in a world where facts and fiction get blurred
In times of uncertainty you need journalism you can trust. For 14 free days, you can have access to a world of in-depth analyses, investigative journalism, top opinions and a range of features. Journalism strengthens democracy. Invest in the future today. Thereafter you will be billed R75 per month. You can cancel anytime and if you cancel within 14 days you won't be billed.
Subscribe to News24
Next on Channel24
PHOTOS | Princess Charlene prepares Princess Gabriella for her 'first official event'