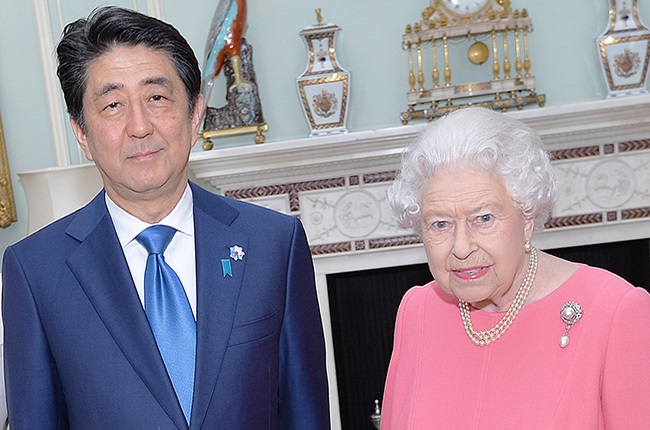 The British royal family have shared their condolences after former Japanese Prime Minister Shinzo Abe was shot and killed during a campaign speech on Friday.

"My family and I were deeply saddened to hear the news of the sudden and tragic death of former Prime Minister Shinzo Abe," Queen Elizabeth said in the statement released by her office at Buckingham Palace. "I have fond memories of meeting Mr Abe and his wife during their visit to the United Kingdom in 2016. His love for Japan, and his desire to forge ever-closer bonds with the United Kingdom, were clear."

The monarch added, "I wish to convey my deepest sympathy and condolences to his family and to the people of Japan at this difficult time."

Her Majesty The Queen has sent the following message of condolence to the Emperor of Japan, following the death of former Prime Minister of Japan, Shinzo Abe. pic.twitter.com/NRCLQ4AyDi

"I'm deeply saddened to learn of the death of Japan's former Prime Minister Shinzo Abe," he said. The note was signed with his first initial, indicating the personal nature of the message.

I’m deeply saddened to learn of the death of Japan’s former Prime Minister Shinzo Abe. A true statesman and committed leader. I won’t forget the warmth and generosity he extended to me during my visit to Japan in 2015. My thoughts are with his family and the people of Japan. W

— The Duke and Duchess of Cambridge (@KensingtonRoyal) July 8, 2022

Per People, Prince Charles was the most recent member of the royal family to meet with Abe when the Prince of Wales attended festivities surrounding the enthronement ceremony of Emperor Naruhito in 2019.

Abe had been delivering a stump speech near a train station in the western city of Nara when an assailant shot him. He was 67.

We live in a world where facts and fiction get blurred
In times of uncertainty you need journalism you can trust. For 14 free days, you can have access to a world of in-depth analyses, investigative journalism, top opinions and a range of features. Journalism strengthens democracy. Invest in the future today. Thereafter you will be billed R75 per month. You can cancel anytime and if you cancel within 14 days you won't be billed.
Subscribe to News24
Next on Life
Operation Golden Orb: King Charles III's coronation