Cape Town – With the mountain in the background and the tallest of buildings on either side of Buitenkant Street, I had a front-row seat as the Duke and Duchess of Sussex made their way to beautiful District Six on Monday afternoon – the former inner-city residential area that was once home to artisans, immigrants, merchants, and the Cape Malay community.

For over a hundred years, different communities and races lived side by side, and the District became known for its vibrant culture, music, and food. In 1966, the government declared District Six a whites-only area, and over 60 000 residents were forcibly removed and relocated to the Cape Flats.

Their Royal Highnesses were greeted by Bonita Bennett before embarking on a tour of the District Six Museum. They saw an interactive map explaining the history of District Six, photos that captured the culture of the community and the music that echoed through the streets. They also met with a musician and former resident of the area. 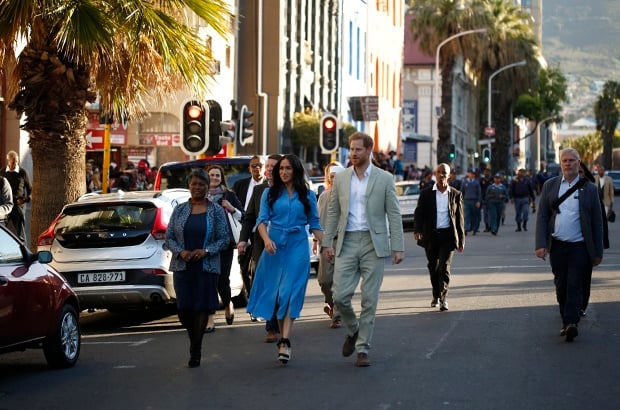 I stood with a small group of residents as I anxiously awaited the arrival of the Duke and Duchess of Sussex at the District Six Homecoming Centre. The Museum and Homecoming Centre were both built to provide former residents with a meeting place to return to and share their memories, create music and even cook together.

Koesisters, samosas and mince were on the menu for their Royal Highnesses when they arrived at the centre – and I will say, Duchess Meghan looked especially taken with the savoury treat that fills the streets throughout the auspicious month of Ramadaan. But Prince Harry was particularly interested in Aunty Fairuz’s potato pudding. "I made a traditional Cape Malay pudding," she told me, "Actually, we call it porring in Afrikaans," she added.

"The main ingredients are potatoes, of course, milk, eggs and sugar, and a touch of vanilla essence and almond essence. You then beat it all up, put it in a Pyrex, and put it in the oven for about an hour. Then it’s traditionally served with some stewed fruit."

On her recipe, and Prince Harry and Duchess Meghan’s reaction, Aunty Fairuz said, "They loved it. They couldn’t believe it was potato!"

I stood just close enough to His Royal Highness to know he was utterly taken with the porring. "Made from potato? That’s amazing!” he said.

Tummies full, I’m sure, and after a few pictures with the residents, the Duke and Duchess made their way to the exit. But before they left, they handed over a copy of Together, the Hubb Community Kitchen cookery book for which Meghan wrote the foreword. I thought of what Aunty Fairuz told me about her cooking – and the connection wasn’t lost on me.

"Does your family love it?" I asked her about her recipe, passed down over generations.

READ NEXT: 10 Photos from Prince Harry and Duchess Meghan's visit to the District Six Homecoming Centre on their SA tour

We live in a world where facts and fiction get blurred
In times of uncertainty you need journalism you can trust. For only R75 per month, you have access to a world of in-depth analyses, investigative journalism, top opinions and a range of features. Journalism strengthens democracy. Invest in the future today.
Subscribe to News24
Related Links
Meghan on SA tour: 'I am here as a mother, as a wife, as a woman of colour, and as your sister'
WATCH: A warm welcome to South Africa and a powerful first appearance for Prince Harry and...
Prince Harry and Meghan arrive in South Africa for royal tour
Next on Channel24
Contents of secret safe revealed for first time ever – and it includes Prince Philip's final wishes