WATCH: Duchess Meghan holds back the tears as she discusses how she’s struggling behind-the-scenes with the intense media scrutiny Cape Town - In a heartfelt admission The Duchess of Sussex, Meghan Markle told ITV's Tom Bradby that she is "not really okay" amidst the on-going media scrutiny.

The 1-minute 15-second video clip shows Meghan visibly emotional when Tom asks her about the impact the negative press has had on her physical and mental health.

Meghan responds, saying: "Any women, especially when they're pregnant, you're very vulnerable, so that was made very challenging. It's a lot."

"It's a very real thing to be going through behind-the-scenes," she adds.

"Not many people have asked if I’m ok ... it’s a very real thing to be going through behind the scenes."

Meghan reveals to ITV's @tombradby the intense media spotlight has left her struggling to cope while becoming a mum #HarryAndMeghan https://t.co/Uy21iE6ozJ pic.twitter.com/kZqhZV66OL

When pressed further by Tom, who asks: "Would it be fair to say [you're] not really okay," she responds: "Yes."

Tom travelled with Prince Harry and Meghan on the recent 10-day tour of Africa, for an ITV documentary, Harry & Meghan: An African Journey, which airs on Sunday at 21:00 on ITV.

While in the country, Harry published a personal statement accusing the British press of conducting what he called a "ruthless campaign" against his wife - as it was announced that Meghan was suing the Mail on Sunday

The upcoming documentary is set to go behind the scenes of the couples' engagements from South Africa to Malawi, Botswana and Angola, according to the Independent.

We live in a world where facts and fiction get blurred
In times of uncertainty you need journalism you can trust. For only R75 per month, you have access to a world of in-depth analyses, investigative journalism, top opinions and a range of features. Journalism strengthens democracy. Invest in the future today.
Subscribe to News24
Related Links
WATCH: Storms derail William and Kate's royal tour
The unusual trait Prince Harry inherited from Prince Charles
WATCH: Will and Kate show off their cricket skills
Next on Channel24
Prince Philip reportedly has a 'library' of books on UFOs and aliens 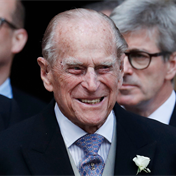