All the winners at the 27th Critics Choice Awards

Jane Campion rounded off a perfect weekend in Hollywood's award season by winning the top prizes at the Critics Choice Awards Sunday, setting her dark Western The Power of the Dog as the film to beat at the Oscars.

Campion - who has already won prestigious gongs from Hollywood's directors guild and Britain's Baftas in a packed weekend - took best picture and best director at the high-profile awards gala in Los Angeles.

The film's award charge comes just days before Oscars voting begins on Thursday, with the grand Academy Awards ceremony itself to be held in Hollywood on 27 March.

"We are so proud and so grateful to the Critics Choice Awards for choosing us. I've still got some PTSD from critics going back to early in my career!" said Campion.

"I'm like the grandmother in the women's movement in film now. But I'm still here," added Campion, who was up against a slate of all-male directors.

Addressing Venus and Serena Williams in the star-studded audience, Campion said: "Serena and Venus you are such marvels - however you do not play against the guys as I have to," joked Campion.

The tennis greats cheered as Oscars frontrunner Will Smith added to his Bafta best actor win earlier in the day for his performance as their father, coach and manager in King Richard.

Smith thanked the sisters in his acceptance speech, telling them he had seen "the secret, scary, hard places that you went out on that court, and you smiled and you did your job.

"Serena didn't smile all the time on court," he joked of the 23-time Grand Slam winner, whose fiery temper has left her at loggerheads with officials on occasions. Will Smith poses in the press room after winning the Best Actor award for King Richard with Champagne Collet & OBC Wines as they celebrate the 27th Annual Critics Choice Awards.
Photo: by Michael Kovac/Getty Images for Champagne 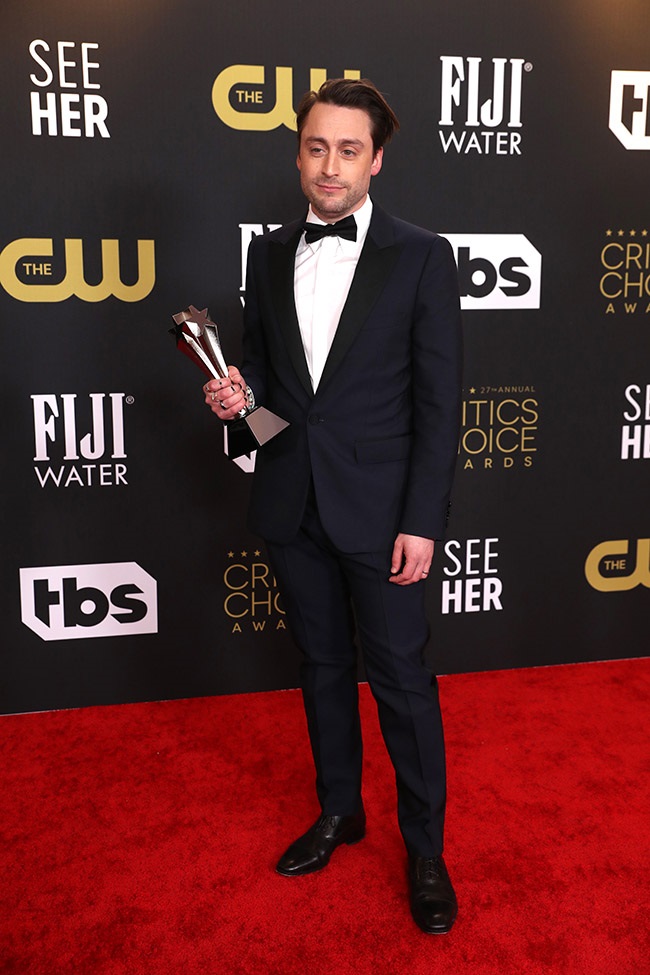 Jean Smart poses in the press room with her award for Best Actress in a Comedy Series for 'Hacks' during the 27th Annual Critics Choice Awards.
Photo: Randy Shropshire/Getty Images for Critics C Jessica Chastain won best actress for The Eyes of Tammy Faye, in which she disappeared beneath layers of the US televangelist's trademark heavy makeup.

The supporting acting winners, Troy Kotsur of CODA and Ariana DeBose of West Side Story, added to growing award hauls as they too pull ahead as Oscars favourites.

The Critics Choice Awards - chosen by almost 500 members of North America's largest critics organisation - laid out a lavish red carpet and gala in Los Angeles for Hollywood A-listers, at a ceremony hosted by Taye Diggs and Nicole Byer.

On the TV side, Succession won best drama, Ted Lasso continued its relentless award sweep of the comedy prizes, and Mare of Easttown was named best limited series.

Ari Wegner, The Power of the Dog

The Eyes of Tammy Faye

The Mitchells vs the Machines

Best Actor in a Drama Series

Best Actress in a Drama Series

Best Actor in a Comedy Series

Best Actress in a Comedy Series

Best Movie Made for Television

Best Actor in a Limited Series or Movie Made for Television

Best Actress in a Limited Series or Movie Made for Television