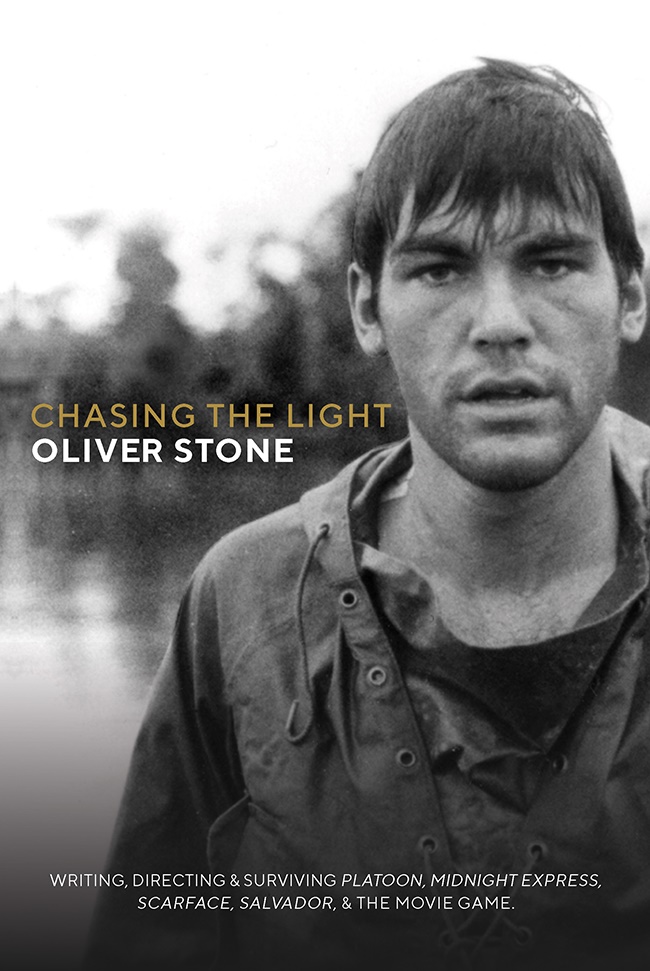 On one street, I have 150 Mexican army soldiers dressed as Salvadoran troops circa 1980. On another street, neighing and pawing the pavestones impatiently are seventy horses with riders gathered from the best vaqueros in the state, a rebel cavalry. I’ve decided they’re going to charge over a bridge onto the main plaza for a final overwhelming of besieged government forces. There will be multiple explosions which we’ve set along the line of the charge. Between the two sides are several dozen villagers, civilians gathered as extras, who will scatter in all directions on cue.

My principal actors, playing journalists, are going to be right in the middle of this charge, watching the cavalry pound down the side of the street right at our cameras. I’ll stay with my nervous star because he’s terrified of getting hurt with this crazy director who’s nearly gotten him killed several times already (according to him), and whom he doesn’t trust because he thinks I’m this gruff veteran of another war (in Vietnam) who believes that all actors are namby-pambies. He thinks entirely, of course, of his face and our imminent gas bombs, any of which could disfigure him and ruin his career when they’re detonated.

The sun is high and hot. I’m ready to call “Action!” After some fifteen years of trying to direct a film like this, today is a dream come true — the vision of a six-year-old boy under a Christmas tree loaded with toy soldiers and electric trains — my very own world. I am the engineer, and I have the power to decide today who dies and who lives in this theater of my making. It’s everything that made the movies so exciting to me as a child — battles, passionate actions, momentous outcomes.

And yet, as exciting as it is to be a god for a few days, behind our film’s props, scenery, and manpower is a forbidding dilemma. We’re out of money. Fifty or sixty of us, foreigners, are stranded in Mexico, living off credit and borrowed time. We started six weeks ago on a vast enterprise requiring ninety-three speaking roles in two languages, some fifty locations, tanks, planes, and choppers to shoot an epic-scale movie about the El Salvador civil war of the early 1980s. We’re working in three different states in Mexico, separated by great distances, shooting, among other things, a massacre outside a large cathedral in Mexico City (standing in for San Salvador), death squads, the rape and murder of nuns, and this scary horse charge — all this for a ridiculous fantasy sum of less than $3 million! Truly, we’d been crazy to start this.

And now the money people are driving out from Mexico City to basically take control of the film from me and the producer, because we’re clearly over budget — by how much no one yet knows — with two weeks left to shoot. Authority has to be reestablished. The people in LA are calling in the “bond company”(Urgh! The very words terrify most producers), who’ve guaranteed “completion” of the film as an insurance company might value a human life until its death, which we’re fast approaching. Despite my exhilaration at getting to this moment, I am also massively depressed that this might be my last setup on a movie on which we’d gambled so heavily and now seem to have lost. “Action!” I yell so they can hear me several blocks away without the radios. “Charge!” The orders are repeated in Spanish over bullhorns by my assistant directors. Then comes the growing sound of pounding hooves on those old cobblestones — four metal shoes to a horse, 280 coming from a distance, heading ultimately for our camera crew. I’m praying no one falls off his damned horse in these narrow streets; he’d surely be trampled to death.

“Get ready!” I yell out, unnecessarily, to the two actors playing journalists with their 35mm cameras perched to shoot the oncoming charge. My lead is jittery. The other actor is solid, though, and determined to shine as the first of the riders appear around a corner, roaring toward the bridge, firing rifles as they ride all out. Brave men. The first horses are now flying over the bridge, a fiery red explosion to their side. Two or three men fall off in choreographed spots without injury. The horde keeps coming. The momentum of the cavalry charge is the most important thing, and I know we’ve got it. I can feel the violence of this moment. It’s too good, too real.

Then, with seventy horses over the bridge, my lead actor bolts. A little early perhaps — the riders are still fifty yards away — but who wouldn’t be scared? Like a giant wave coming down on a ship, the noise alone is enough to terrify even the hardiest soul. And yet the supporting actor, motivated by a moment of greatness, stands firm as a rock, “photographing” this classic moment. At thirty yards I scream at him to run — “Get out of there!” — as my brave cinematographer and I know we won’t escape unless we do it now, sprinting out of the path of the horses. We go!

At twenty yards, my intrepid and nimble second actor jumps to safety just in time. It’s chilling. The sound alone and the jittery images will work. It’d be a spectacular moment on film. Too bad the first actor left a little too early, but . . . that’s his “character” emerging in the movie. Not exactly a Hollywood hero.

“Cut!” I scream. A tremendous energy is expired before the horses and the crew reassemble, breathing hard, the horses’ flanks heaving, instructions in Spanish yelled out between crew members, many adjustments made.

Now that we’ve broken the ice, I call for a second take. We’re on a roll; over the next two hours, we do the charge four more times, covering all kinds of angles as the cavalry swarm over the overnment troops (mostly Mexican stuntmen), turning the tide of the battle in favour of the rebels.

That is, until — in the film — the United States embassy, on alert, intervenes by phone in this crucial battle of this civil war and authorizes the newest tanks and weaponry from America to be released to the government side. With three tanks, some air cover, and artillery, there’s enough firepower to turn back the temporary rebel tide and ensure a government stabilization. We’re planning to shoot this over the next two days as we try to complete the battle before our financial lifeline is cut. But I tighten when I see my producer walking toward me with his perpetual frown of worry.

With British understatement he quips, “I’m not frowning, am I? . . . We got the million.”

Chasing The Light by Oliver Stone is published by Octopus Books and distributed in SA by Jonathan Ball Publishers | R310.

We live in a world where facts and fiction get blurred
In times of uncertainty you need journalism you can trust. For 14 free days, you can have access to a world of in-depth analyses, investigative journalism, top opinions and a range of features. Journalism strengthens democracy. Invest in the future today. Thereafter you will be billed R75 per month. You can cancel anytime and if you cancel within 14 days you won't be billed.
Subscribe to News24
Related Links
We meet the hot cast behind the steamy new flick that will heat up SA cinemas
WATCH | 10 reasons to check out The Babysitter sequel on Netflix
Netflix acquires Zendaya and John David Washington movie for R500 million
Next on Channel24
'Undeniably unsettling' Aussie cop drama disturbs Cannes