The film follows a father and his two teenage daughters who find themselves hunted by a massive rogue lion intent on proving that the savannah has but one apex predator.

The film was shot entirely in South Africa. Locations included Cape Town and Limpopo. The final showdown was filmed in the Northern Cape, on the Namibia border.

"You see both South Africa and Namibia in some shots," says the film's director, Baltasar Kormákur.

"We are proud that we were able to bring a production of this size to this area," producer James Lopez says.

"We've seen first-hand what an impact a production like this can have on the local people in the region. The story is set in a game reserve, and when we talked about different places to film, South Africa was number one on the list. The film industry in South Africa is strong. Touching ground here and scouting in the region and seeing what South Africa's film community could offer, we knew we made the right decision."

The production team also wanted to protect the natural environments in which they were filming. For one particular scene of Nate Daniels (Idris Elba) in a watering hole, the production built an actual watering hole to avoid disturbing an existing one used by animals. Production designer Jean-Vincent Puzos and his team brought the water and set up a space with trees and rocks. This gave the water the effect of a mirror - like an extremely vast lake with a perfect line.

It was critical to Kormákur not to showcase the 'Hollywood' version of South Africa but a realistic one.

While the cast of Beast comes from many different countries, it was important to the filmmakers that most of the supporting cast be South African.

"You will hear some Venda spoken in the film," Lopez says. "We also used actual town and location names. We wanted to make sure that we honoured the region in terms of casting, as well as dialect and the architecture of the village. That all plays into making sure we're as true to the story as possible." 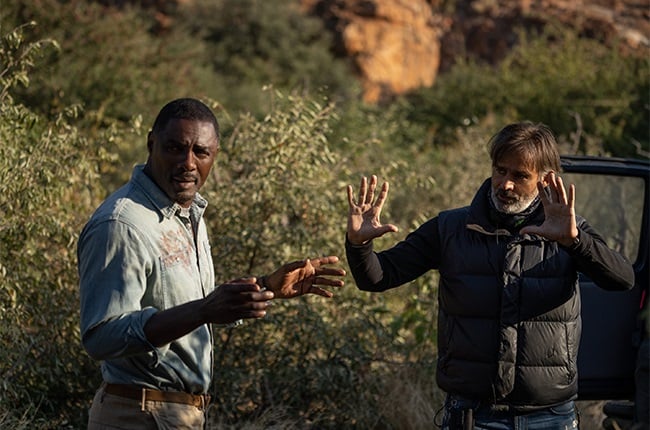 Idris Elba and director Baltasar Kormákur on the set of Beast/
Photo: Supplied

Beast is produced by Will Packer, James Lopez, and Baltasar Kormákur.

WATCH THE TRAILER FOR BEAST HERE:

We live in a world where facts and fiction get blurred
In times of uncertainty you need journalism you can trust. For 14 free days, you can have access to a world of in-depth analyses, investigative journalism, top opinions and a range of features. Journalism strengthens democracy. Invest in the future today. Thereafter you will be billed R75 per month. You can cancel anytime and if you cancel within 14 days you won't be billed.
Subscribe to News24
Next on Channel24
Nope: What inspired Jordan Peele to 'design a spectacle' out of an 'awful bad miracle'