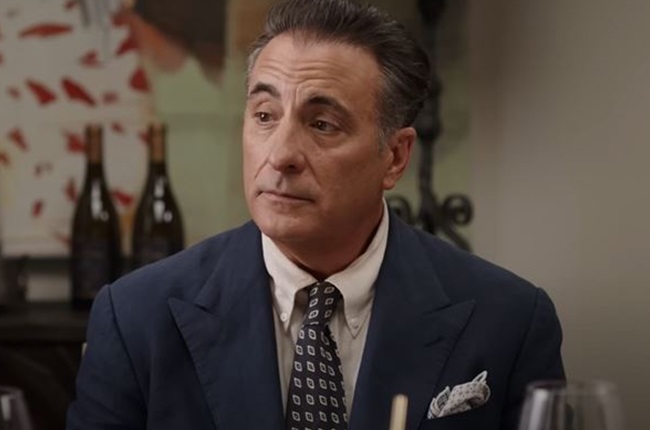 Andy Garcia in Father of the Bride.
Screengrab: YouTube/Warner Bros

"Fathers play a big role in their daughter's life; it's a special bond that only they share. And even when she's all grown up, she's still daddy's little girl," says Andy Garcia in the trailer for Father of the Bride.

Garcia and Gloria Estefan lead the latest remake of the comedy-drama based on the novel by Edward Streeter. Steven Martin and Diane Keaton starred in the 1991 film, and Spencer Tracy and Joan Bennett starred in the original 1950 film.

In September 2020, Warner Bros announced that a Latin adaptation written by Matt Lopez was in the works. Gaz Alazraki signed on as director in 2021, and Garcia was announced to star in the title role.

"Long-married couple Billy (Garcia) and Ingrid  (Estefan)  are surprised when their eldest daughter Sofia (Adria Arjona) comes home to Miami for a visit. But the surprises keep coming when she announces a new boyfriend, Adan (Diego Boneta) - who is now her fiancé - and their plans for a quick-turnaround wedding and a new life together in Mexico, where Adan's family is from", reads the official synopsis.

"Sofia's quickfire revelations keep Billy and Ingrid from making their own disclosure - that they're calling quits on their marriage - but  both agree to delay the news and play the loving couple for the benefit of the family."

The film premieres on HBO Max on 16 June.

We live in a world where facts and fiction get blurred
In times of uncertainty you need journalism you can trust. For 14 free days, you can have access to a world of in-depth analyses, investigative journalism, top opinions and a range of features. Journalism strengthens democracy. Invest in the future today. Thereafter you will be billed R75 per month. You can cancel anytime and if you cancel within 14 days you won't be billed.
Subscribe to News24
Next on Channel24
WATCH | Long-awaited Avatar sequel makes a splash with teaser trailer