Siv Ngesi at the The Woman King Red Carpet And Special Screening at Ster Kinekor at Mall Of Africa.
Photo: Oupa Bopape/Gallo Images

Siv Ngesi says the journey he has been on the past few years, trying to be a better man, prepared him for his role in The Woman King.

Ngesi plays The Migan, the king's advisor and the male counterpart to Viola Davis' Nanisca, the Miganon. As her character leads the women's army unit, he leads the male unit.

The Woman King tells the story of the Agojie, the all-female unit of warriors who protected the Kingdom of Dahomey in the 1800s.

"He's quite a fascinating character," Ngesi further explains. "He's a fictitious character, but the director Gina [Prince-Bythewood] has two sons, and I think it was an important part to play because she just wants to show the boys in the society and her sons that the world needs men to be allies as much as possible to be involved in the fight."

These issues that we have in society men need to get their hands dirty. They need to be accountable.

Ngesi adds that his character has an 'interesting point' in the story because he starts in the same position as Davis' character. He gradually sees that they are equals, if not that she's better.

"Gina said that they auditioned this character throughout the world, and I was the first person to play him vulnerably," says Ngesi.

'I've been preparing for the last six years'

Whereas the other characters had the historical background to build their characters on, Ngesi drew on his work over the past few years, including his work offscreen.

He says he consciously decided to fight for the girl child. He runs a charity called the MENstruation Foundation that distributes sanitary towels to women every month and does a lot of work in the gender-based violence space and the LGBTQI community.

"I've tried my best to be an ally as much as possible, and what I've learned over the last few years is that an ally isn't the loudest person in the room. He's usually the guy next to them supporting, and then when the time comes, he'll put up his hand and go, 'I'll go where I am needed'.

"So, the irony of the whole thing is that I have been preparing for the last six years in the particular space. To build the muscle was the easy part because I was already doing a bodybuilding competition, so I had the muscle already." 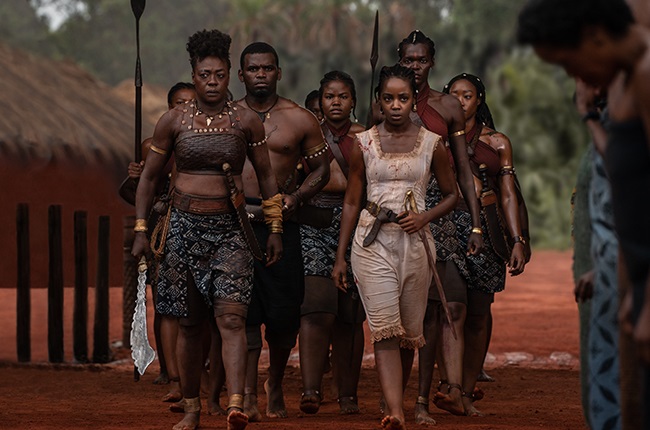 Regarding the action scenes, Ngesi says he was lucky he had a fighting background. They did gym training daily and five hours of choreography.

"A lot of our fight scenes were cut, and a lot of them were about the women fight scenes, which works perfectly. Nothing seems more poetic than watching a woman kick a man's ass."

When I saw my scene, I was like, okay, cool. I can see why you cut my shit.

The Safta award-winner attended the world premiere at the Toronto Film Festival earlier this month, which he says was an incredible experience. The reception from the crowd after the credits rolled carried with it a range of emotions.

"I don't think the world expected Woman King to do what it's doing," says Ngesi.

Ngesi says the experience of walking the red carpet made him want to work harder to have the power to be able to pick these types of characters to play.

One day when I have a daughter. I'll take out the DVD or go to a streaming platform, and I'll be like, 'look what your dad did. And it started this, this, this, this …' And that's where I want to be.

Ngesi hopes that people who go and see the film take away from it that "you're more than enough."

"For the girl child who's always been told, Black girl, you're not good enough as a dark-skinned little girl. And to men, there are times when you have to be accountable to yourself, and sometimes you have to have to go against your friends, families, your brothers and everything you've been taught and do the right thing. And I think that The Migan's battle, and he gradually starts to come around."

The Woman King is now showing in cinemas nationwide

We live in a world where facts and fiction get blurred
In times of uncertainty you need journalism you can trust. For 14 free days, you can have access to a world of in-depth analyses, investigative journalism, top opinions and a range of features. Journalism strengthens democracy. Invest in the future today. Thereafter you will be billed R75 per month. You can cancel anytime and if you cancel within 14 days you won't be billed.
Subscribe to News24
Next on Life
Film academy reviewing Oscar campaigns after surprise nomination