Five Tiger, the short film by South African writer/director Nomawonga Khumalo, has been selected to play in competition at the Tallinn Black Nights Film Festival/PÖFF.

The 10-minute film centres on a woman who, to support her sick husband and daughter, finds herself in a transactional relationship with the leader of her church.

Nomawonga's introduction to filmmaking was as an on-set tutor, teaching child actors on local and international sets. With that first taste, she wanted more and began as a camera trainee at Media Film Services.

In 2019, her film The Bursary won Best South African Film Project and Most Promising Narrative at the Durban FilmMart.

In this Q&A, we speak to Nomawonga about what inspired the film, why it was important for her to tell this story, and the upcoming film festival.

Can you describe the moment you found out your film had been selected to screen at the Tallinn Black Nights film festival?

It was a significant moment in validating that what mattered to me most had translated and, better yet, resonated with audiences. The selection has given me the courage to aggressively pursue the dismantling of patriarchy in my storytelling and that there is a place for my brand of feminism, particularly in a traditional African context. It is assuring to know that in a culture driven by influence and material gain, women like the one I met did not need to be remoulded to be visible and have their voices heard.

What inspired the idea for this film?

While working on a telenovela in 2018 on the outskirts of Johannesburg, I met a group of prostitutes who stood in the scorching heat in front of an abandoned textile factory, waiting for trucks that drove by. The quiet road had overgrown shrubs and grass, and I noticed that the group of women would use the quiet times to gather grass to make mats and cut firewood to sell.

Over the misfortune of a thin piece of fabric holding some twigs together snapping as she walked by, I found an opportunity to engage with a woman both culture and religion had advised I either judge or treat as invisible. We engaged in light banter over how expensive the cost of living had become, the lack of employment and how her daughter spent her hard-earned money on sweets at school.

The only difference between her and the women that raised me was the absence of a liberating education (in whatever shape or form). She believed that as long as she was able to work hard, God would provide for her and her family. As we parted ways, I felt bitter over how this woman's faith kept her hope for a better life burning but in reality, did very little to change her circumstances. The theme of the movie can be considered to be quite controversial. Why was it so important for you to tell this story?

We cannot begin to tackle issues of gender-based violence without unpacking the schools of thought, ideologies and cultures that support it. The notion that some women are worthy of protection, and others aren't, distract us from the issues at hand. Religion and culture draw the distinction between 'good' women and 'bad' women, and our convictions in this matter play a significant role.

There is a homogenous representation of prostitutes and other women whose poverty carries a significant urgency, being products of their own bad choices in our storytelling. This is a convenient segue from addressing the role we as a society play in keeping them in those positions through our convictions.

As a collective, we make culture and so the power to change it lies in our hands too. This story is an important one to tell because it characterises the 'Proverbs 31 woman' (one who displays an endless diligence in working hard work for her family) in the body of an 'Eve', 'Jezebel' and 'Delilah' and asks the audience to review their understanding of these 'good' and 'bad' women.

Dismantling the compartmentalisation of women is key in addressing the justification of violence towards women and the finger-pointing that often hijacks the conversation.

How did you approach writing this script, and what was most important to you in its execution?

In the approach, we were careful to hold reverence for the sanctity of the black female body, avoiding the pitfall of eroticising the act of violence that is often depicted in narratives exploring sex work, slavery, or women abuse.

Taking the intersectionality of the protagonists' challenges into account, we could not shy away from the poverty that informs Fiona's actions and the faith that gives her hope.

Care was placed in displaying her position as a woman of faith, a mother who wants the best education for her daughter and a wife who wants her husband to get better - not just as a deviant woman. In the writing, it was imperative to foreground Fiona's ambitions and have her husband and priest's intersection in the background, seeing the world through her eyes.

In the execution, it was important that Fiona's dignity took precedence above her adversaries, moving away from the fetishisation of pain by displaying it in quiet moments as opposed to having it more overt. Her circumstances themselves being traumatic, our costume choices, lighting and blocking were deliberate in not pandering to the idea of a 'broken woman'. 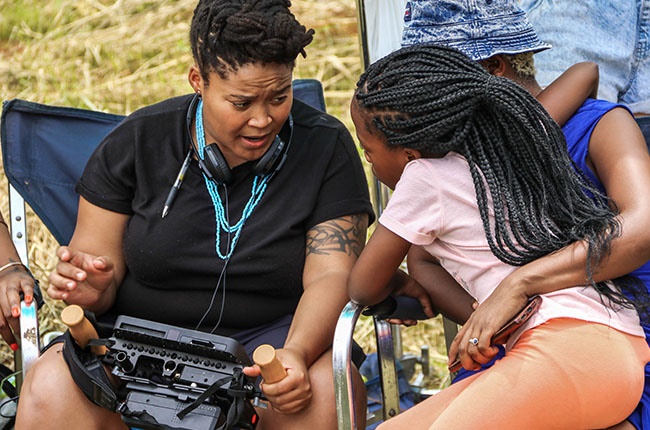 Nomawonga on the set of Five Tiger.
Photo: TBZ Visuals

What do you hope people walk away with after seeing the film?

I hope people walk away with an elevated demand for context in their daily interactions and in their consumption of media.

I would like the audience to review culture and religion's prescriptive methods of 'hard work' and 'faith' as a means to better ones' circumstances. 'Hard work' and 'faith' also serve as powerful deflectors in hiding the many traumas faced by marginalised members of society (especially our mothers), avoiding dealing with the root of the problem.

Lastly, I would like audiences to understand how education and class affect the negotiation of the iron rule of patriarchy and how it does not affect us in the same way. An example of this is disregarding the reality of the exploited members of 'faith-for-profit' churches, labelling them as 'stupid'.

We live in a world where facts and fiction get blurred
In times of uncertainty you need journalism you can trust. For 14 free days, you can have access to a world of in-depth analyses, investigative journalism, top opinions and a range of features. Journalism strengthens democracy. Invest in the future today. Thereafter you will be billed R75 per month. You can cancel anytime and if you cancel within 14 days you won't be billed.
Subscribe to News24
Related Links
The Seriously Single cast on romance, friendship and messy detours on the path to finding love
Nompilo Gwala on the success of local film Santana: 'You hope for the best - the best is quite...
Next on Life
Ashton Kutcher finally admits No Strings Attached and Friends with Benefits are ‘basically’ the same