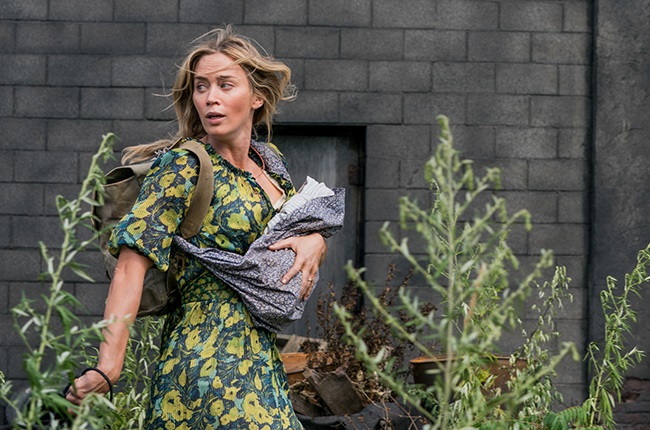 After the deadly events at their home, the Abbott family venture out into the unknown, facing the terrors of the outside world as they continue to battle for their survival in silence.

I remember seeing the trailer for the first instalment of A Quiet Place in 2017. I knew I had to watch the film as soon as it hit cinemas the following year. While most in the horror genre were leaning on hauntings and tormented teens to get a quick scare out of viewers, John Krasinski took a different approach – and it paid off.

The film revolves around an alien race who have taken over earth. They're on a spree to wipe out humans – not sure why, but food doesn't seem like the answer. While the strange, long-limbed creatures are terrifying in every imaginable way, they cannot see and only hunt by sound, so going undetected is possible.

Their hearing, though? Impeccable.

Stay quiet, stay alive – that's the key to survival, and the Abbott family have perfected it.

Let me start by saying that you may be a little lost with the sequel if you have not seen A Quiet Place (part one). The films come as a pair, with part two kicking off exactly where we left Evelyn (Emily Blunt), Regan (Millicent Simmonds), Marcus (Noah Jupe) and the family's new arrival.

In this way, it almost feels like an extended series, starting where the last episode stopped and concluding with enough room for producers to keep the story going, should they wish to.

As with the first film, the dialogue is limited. That said, nothing is lost. In fact, I could argue that the viewing experience is heightened because of this choice. Every word means so much more, and in the moments of dead silence, I found myself holding my breath too.

John Krasinski and his team (aided by producers Michael Bay, Andrew Form and Brad Fuller) did an incredible job using visual cues to tell this story. Again, some of these may be lost on you if you have not seen the first film.

We also continue to hop in and out of Regan's world, with the sound being entirely cut in some scenes to allow viewers an inside glimpse into the life of the deaf teen.

Millicent is the star of this film. The young actor did a great job luring me into this sci-fi world and keeping me there, on the edge of my seat the entire time. That said, she's backed by a strong cast who can effortlessly convey their fear and despair without a single utterance.

I will admit I was pretty concerned about where the storyline would go without John in the film, but as much as I appreciated his character in part one, I didn't miss him at all in part two. This may sound harsh, but I mean that in the best way possible. The other characters were able to carry the story without Lee Abbott at the centre.

I'm also not fond of films that are riddled with unnecessary flashback scenes. Fortunately, John spared me this torture, only using one at the very beginning to provide context for what's to come.

As with the first instalment, Emily Blunt delivered an utterly believable performance as a mother who would do anything to protect her children – vulnerable but powerful all at once. I'm always here for a solid female lead, and Emily's performance, alongside Millicent's, was a highlight for me.

While it does not feel like a conventional horror film (a good thing), A Quiet Place Part II will still provide you with all the jump scares your heart can manage without relying on them as heavily as other films in this genre.

Every time I thought an alien was about to creep up behind someone… it didn't. A clear sign that producers were aware of all the horror clichés and tried their best to avoid as many as possible. As someone who loves horror films, I appreciated this. There's nothing worse than watching a scene, all the while knowing exactly what's about to happen next.

There's also another element of fear added this time around, as the Abbott family have to worry about more than just the monsters when they venture out into the unknown.

As a side note, those old-school creep-up-from-behind scenes do exist, but the creativity is to be commended again.

Here's what I was left feeling when I walked out of that cinema:

Firstly, will there be a third film in this franchise? According to an interview Emily Blunt did with Collider - probably, yes.

Which makes sense because the ending is open enough to facilitate another one easily, but still provides enough answers for viewers to draw up their own conclusions should we not be so lucky. A smart move on John's behalf – if the film continues to make money, consider a third. If not, quit while you're ahead. Either way, there are no loose ends.

Personally, though, I look forward to learning more about these creatures and the continued battle against them.

The other thought I had when the credits started rolling – I want to watch that again! It may have been a year late, but A Quiet Place Part II was well worth the wait.