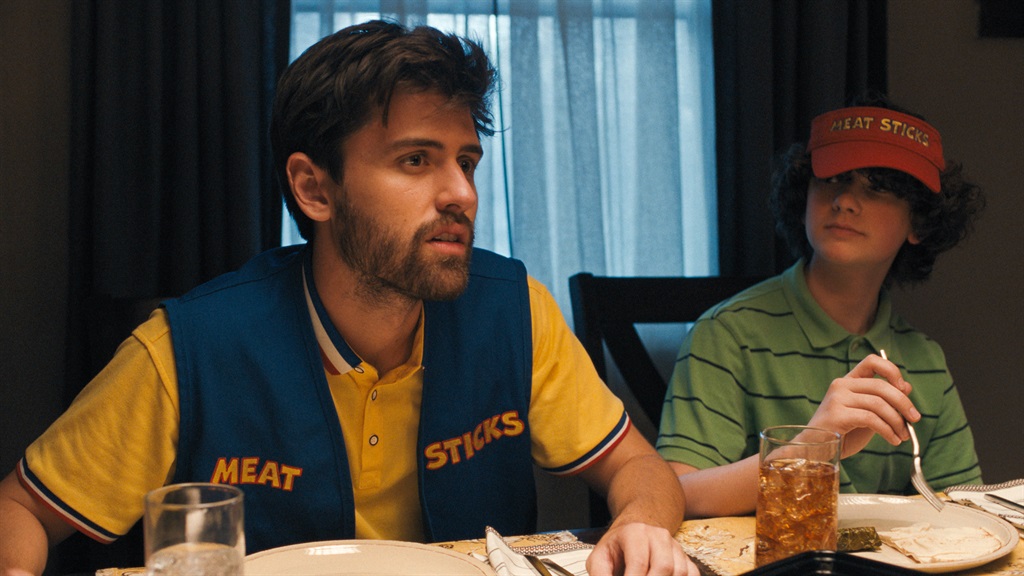 Andrew (Cooper Raiff) is a charming but listless 22-year-old college graduate who lives at home with his mother (Leslie Mann), stepdad (Brad Garrett) and younger brother, David (Evan Assante). He makes some money here and there by flipping burgers at his local fast food restaurant and working as a "party starter" at Bar and Bat Mitzvahs in his local community. He kind of has a girlfriend overseas, and though he plans to visit her at some point, he's convinced she's cheating on him, especially as their communication has trickled down to almost nothing. When he meets and befriends a young mother, Domino (Dakota Johnson), and her high-functioning autistic daughter, Lola (Vanessa Burghardt), his life starts to snap into focus – and becomes all the more complicated as a result.

Look, let's get this out of the way: Cha Cha Real Smooth is a bloody awful name for a movie. It makes some sense in the context of the film, but still not a ton, and it does nothing to represent what kind of film it is. Frankly, if I weren't assigned it to review, I would have skipped right past it on Apple TV+'s pretty but dysfunctional home screen, presuming that I wouldn't get, which would be a pity because it's a real gem of a movie.

Cynically – and probably entirely incorrectly – it can be seen as a cash-in by Apple on the runaway success of CODA, what with it also being a coming-of-age story centred around someone whose growth is spurred on by their extensive interactions with someone outside of the... typical (is that the politically correct word?). But not only does that overlook how long it takes even tiny, indie films like this to be made, cynicism could hardly be less appropriate for something so obviously personal and warm-hearted.

Cooper Raiff, who writes, directs, produces, and stars in the film (slacker!), based the story on his own experiences as a non-Jewish kid growing up in a part of Texas with a large Jewish community and where his Grade was, by his estimation, at least 40% Jewish. He notes how until he was thirteen, he barely noticed this fact, but suddenly found himself going to Bar and Bat Mitzvahs every Saturday for an entire year. Despite obviously being part of the dominant culture, he suddenly felt like an outsider looking in at a tradition that he admired and enjoyed but wasn't quite part of.

To be honest – and this is probably my biggest criticism – I would have loved for the film to delve more into that aspect, as it's rare to see any sort of "mainstream" media view Judaism through a lens other than either extraordinarily alien and anachronistic (the sudden explosion of shows that deal with ultra-ultra-Orthodox communities being a case in point) or so entirely assimilated that the differences between Jewish and non-Jewish culture come down to the occasional quirk or a peek into a slightly different but typically disengaged place of worship. But alas, Raiff keeps this level of the film relatively shallow and overly familiar.

Looking at the film for what it is, though, rather than what I wish it could be, this theme of being someone just out of step with their own lives runs throughout the narrative. It informs every major character that our hero Andrew (Raiff himself, who avoids the self-aggrandisement and the self-indulgence that could have come with this role but comes across as immensely charming and sympathetic) comes into contact with... and, of course, he himself.

Andrew struggles to find his way after just graduating college but does not know what he wants from life. The unlikely named Domino (Johnson, typically excellent) keeps talking about how much she wants to marry her distant fiancé, Joseph (Raul Castillo). Distant both literally and figuratively, as he spends a lot of time travelling and seems quite unemotional when he is around. Domino's daughter, Lola (newcomer Burghardt, who has autism spectrum disorder like her character, kills it in her début role, and it's her interactions with Raiff's Andrew that is the soul of the film) is a literal outsider as her autism acts as a constant barrier of understanding between her and others. And Andrew's younger brother, Dave (Assante, another young newcomer who excels here), is, well, a typical teenage boy trying to gain the attention of a girl he likes and turns to Andrew for help. Even Andrew's mom (Mann, at her very best in a small but crucial role) is disconnected from her life by her bipolar disorder, where a simple shift in mood can bring the comfortable flow of her suburban life to an abrupt halt.

Though there's little that's original or surprising about how the story plays out or how these various characters affect Andrew and one another, Raiff brings an easygoing, unpretentious humanity to all of his roles in the film, giving the whole thing a ring of truth that belies its more formulaic trappings. It's, very simply, a really well-made and well-intentioned little film with a sharp script, excellent performances, rock-solid character work, and a good, strong handle on its central theme. It may not blow your socks off, but it's hard to imagine anyone not being won over by this beautifully human story – or not impressed by how confident a piece of work it is for so young and so relatively inexperienced a filmmaker.

Cha Cha Real Smooth is available to stream on AppleTV+