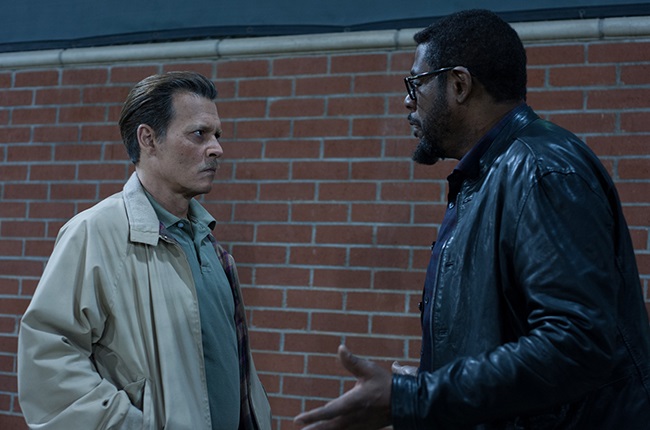 A disgraced detective, Russell Poole, and an investigative journalist, Jack Jackson, work together to try and close the case that Poole struggled to work on sixteen years prior thanks to major resistance from both senior politicians and the LAPD itself: the murders of the Notorious B.I.G and Tupac Shakur. Based on Randall Sullivan’s controversial non-fiction book on the subject, Labyrinth.

Prior to the film's release in the United States in August 2018, it was shelved indefinitely by the studio for undisclosed reasons. The reasons for pulling the film range from not wanting to be associated with Johnny Depp’s recent legal issues too, get this, pressure from the Los Angeles Police Department as it is implicated heavily by Russell Poole is not just covering up these notorious twin-murders but in being active participants in it.

Either way, the real-life drama behind the film is almost as wild as the story being told in the film – and that’s really saying something. As the title (both titles, really) suggests, City of Lies presents an ever-deepening conspiracy revolving around the LAPD, Californian politicians and the genuinely notorious “gangsta rap” label, Death Row Records. The film doesn’t ultimately point to a single individual definitely responsible for the murders (not a spoiler: both cases are still known as two of the great unsolved crimes of the past fifty years) but it does make a compelling argument for why the public murders of two extremely famous young men have never come remotely close to being solved.

As City of Lies does make clear, though, Poole was widely regarded by most who knew him as a total whackadoodle, peddling ludicrous conspiracy theories and effectively-being seen as by others in law enforcement as the real-life equivalent of Fox Mulder. All credit to director, Brad Furman (The Infiltrator, The Lincoln Lawyer) and actor-turned-screenwriter Christian Contreras, then, who clearly sympathise with Poole and make a persuasive case for his audacious claims but are fully aware of just how mad Poole’s story is, and do at least cast some doubt on its truthfulness. They’re clearly very much on his side but do at least allow for some doubt.

Unfortunately, though Furman and Contreras do a very good job of taking what was undoubtedly an (if you’ll pardon the pun) labyrinthine book and turning it into a super compelling and entertaining drama, they do falter somewhat in presumably following the book’s structure (I haven’t read it) and making the film just a bit too convoluted at times for its own good.

The film also has a shaky framing device in the first half built around having Depp’s Rusell Poole explaining his decades-long work to Forest Whitaker’s Jack Jackson. It’s a sensible way to get the audience up to speed, but it is rather clumsy, and the friendship between the two men doesn’t exactly develop all that organically. By roughly the midway point, though, the “present day” sections do become as compelling as the stuff happening in the past as the focus shifts from the case itself to Poole’s relentlessness in the face of a seemingly unstoppable force that is hellbent on burying the case and Poole along with it. Their friendship starts to come across as more authentic too as the film goes on and Jackson starts to become more than just a plot device.

City of Lies, for all of its problems, is absolutely worth seeing and certainly doesn’t deserve the ignoble fate that it, like its real-life protagonist, has received. It’s a fantastic story, compelling told with a beautiful sense of time and place (cinematographer, Monika Lenczewska, gives the film a suitably noirish hue). If that wasn’t enough of a reason to check it out, along with a brace of fine supporting performances, it also boasts the very best Johnny Depp performance since at least Black Mass in 2015. It took me a few minutes to realise that Depp wasn’t just doing his Johnny Depp thing but was actually turning in a much more controlled, layered performance. And when is the last time you could say that?

We live in a world where facts and fiction get blurred
In times of uncertainty you need journalism you can trust. For only R75 per month, you have access to a world of in-depth analyses, investigative journalism, top opinions and a range of features. Journalism strengthens democracy. Invest in the future today.
Subscribe to News24
Next on Channel24
One Night in Miami