After drunkenly sending a cringeworthy email, hopeless romantic Wesley heads to Mexico with her best friends to erase the note before her new love finds it.

I've always been obsessed with the classic romcom, and if you check my Netflix "My List" section right now, you'll find How To Lose A Guy in 10 Days, Just Got With It, Always Be My Maybe and The Lovebirds lined up for a lockdown movie night.

The genre is known for getting a bad rep, but when done right (I'm looking at you Bridesmaids, and looking away from you Trainwreck), it's the perfect formula. And you always know what you're getting yourself into when you press play – a happy ending wrapped in a neat little bow.

It's not the most progressive genre by any stretch of the imagination and the heroine often has to overcome every movie cliché in the book before realising love was under her nose all along, but then again, who said finding love was easy?

Seriously, I'm asking. Because currently, I'm a 30-year-old single journalist, living in a small apartment in a major city, and I'm one dead potplant away from being labelled a total romcom single girl stereotype. Here's to hoping I resemble a young Carrie Bradshaw from Sex and The City.

Although Desperados play into every romcom stereotype, and the premise is completely insane, Netflix's latest release is packed with laughs and fun to watch on a night in.

When we first meet Wesley (Nasim Pedrad), it quickly becomes apparent that at 30, her life isn't heading in the direction that she had hoped for - married, with a dope career and a couple of kids.

Instead, Desperados leans into every single girl romcom trope. The apartment littered with overdue bills, egg freezing brochures on the table, a single bottle of wine on the fridge, a dead bird and, of course, the collection of bridesmaids shot glasses.

With no job prospects, our girl Wesley is spiralling. Fast. And then comes the nail in the coffin; her ex-boyfriend calls to say he is getting married.

Wesley is now determined to get back out there and dip her toe back in the dating pool. After a horrible blind date with Sean (Lamorne Morris), she stumbles and knocks her head when leaving the restaurant, and literally falls into the arms of total dreamboat Jared (Robbie Amell).

After a month-long romance, Wesley and Jared spend the night together, and it's everything Wesley could have imagined. Candles, rose petals, a duvet cover, the works. But Wesley's happiness is short-lived when after five days her boyfriend still hasn't called her back.

Cue gal pals Brooke (Anna Camp) and Kaylie (Sarah Burns), who bring over tote bags of wine and tequila to help ease Wesley's heartbreak. And after some trash talk, the ladies compose an email to Jared, insulting his manhood and wait for it, his dead father.

But right after she hits send, Jared calls. He was in a car accident in Mexico and has been in a five-day coma (can you believe it!) and has been unable to reach Wesley because his belongings are at the resort.

Wesley does what any rational person would do; she hatches a plan to fly to Mexico with her two best friends, book into the resort where Jared is staying, locate his room, steal his devices and delete the email.

Isn't that precisely what you would do in the same situation?

At the resort, Wesley runs into her blind date from the month before, Sean, who ironically becomes an integral part in her master plan, and together, the fab five embark on a tropical adventure. But obstacle after obstacle leads to some major hiccups along the way.

Wesley finds herself in some ridiculous situations; our heroine gets slapped across the face by a CGI dolphin penis and electrocuted like a cartoon character when climbing over an electric fence but as Wesley says - her personality is an "acquired taste".

If you don't laugh at the comedy, your jaw will drop because of the absurdity. Desperados toes the line between comedy and cringe.

But despite the slapstick humour, Desperados has heart.

As with every romcom, Welsey has an "ah-ah moment" when she discovers that when you meet the right person, they will love you for who you are and not who you pretend to be. (Who knew!)

Friendships are put to the test, but at the end of the day, your girlfriends will remain long after you've healed from a heartache you thought you'd never survive.

Among the misses, there are plenty of hits and Desperados is just wacky enough to keep you entertained on a Friday night indoors during lockdown. 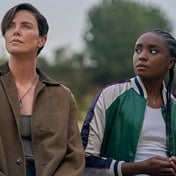