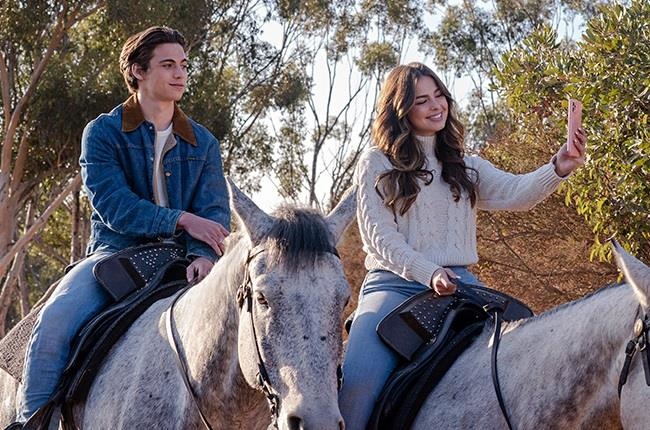 Tanner Buchanan and Addison Rae in He's All That.
Photo: Kevin Estrada/Netflix

An influencer specialising in makeovers bets she can transform an unpopular classmate into prom king in the remake of the teen classic She's All That.

She's All That is one of my all-time favourite teen rom-coms, so I was pretty stoked when I heard there was a Netflix remake on the way. "Be silent, be still," I told my excited self. Sadly, that's exactly what I was for all 91 minutes of the tired, uninspired and shallow He's All That.

The movie follows the exact same storyline as the '90s classic. Padgett (Addison Rae), the equivalent of Freddie Prinze Jnr's Zach, is an influencer who, after a very public breakup, enters a bet with her mean friend that she can transform the school's biggest loser, Cameron (Tanner Buchannan) into prom king. Padgett ends up falling for Cameron, of course, only for him to find out he was a bet – yes, "a fucking bet!" The film ends pretty much the same way, too, with Padgett a suddenly transformed influencer, and though I appreciated all the She's All That references down to appearances by Rachel Leigh Cook and Matthew Lillard; unfortunately, that's where the joy of this movie ended for me.

Though they tried their best to make the characters more relevant, we're tired of the best friend who turns out to be a bitchy, backstabbing mean girl. And even though the film clearly tries not to stray from the original plot, the problematic themes and storyline didn't age well; and the very iconic scenes we've come to know from the original fell flat.

You can't base a whole movie around one makeover only for the montage to see Addison Rae trimming a few split ends. What was she shaving on his face? Are you telling me the guy let himself go for years only to grow some stubble? Please.

Much like Cameron's makeover, which should've been the equivalent of Laney Boggs' forever-in-our-hearts reveal to Sixpence None The Richer's Kiss Me, the movie was a big letdown. It kind of reminds me of those straight to TV sequels or films like Mean Girls 2 – ironically, this film was directed by Mean Girls' Mark Waters – with a sloppy edit and younger cast who just do not deliver with their performances. There's a horse-riding moment between Padgett and Cameron where they start falling for one another, but their laughter's so fake and forced it's difficult to believe Rae and Buchannan have any chemistry – or previous acting experience. This film just can't compete with the original.

I do think the latter will at least see the film have some kind of success, though. Casting Addison Rae – who wasn't completely terrible – as the lead will attract a whole new audience. Likely, the same viewers who'll appreciate the Kissing Booth films and all its feel-good, fluffy glory. And hey, that isn't necessarily a bad thing. The cutesy moments, albeit very few of them, will at least entertain, and for the most part, it's pretty harmless.

Would I watch another film by a TikTok star anytime soon, though? Probably not. But Addison Rae will undoubtedly familiarise Gen-Z cool kids looking for something to stream on Netflix with a version of the '90s film I love so much; I can read the dialogue back to you verbatim. Sadly, it's vapour; it's spam – it's just not the She's All That remake we deserve.