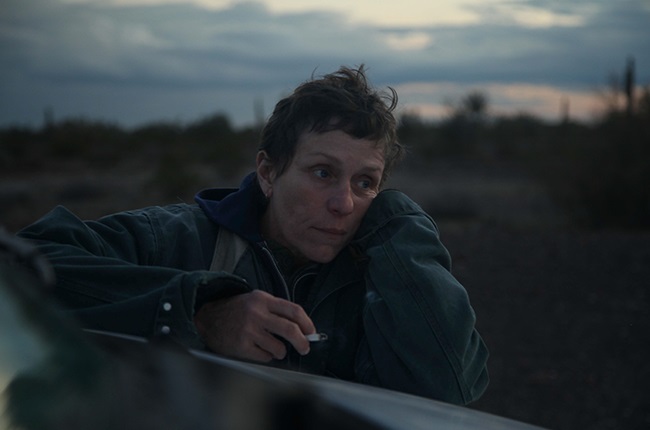 A woman in her sixties who, after losing everything in the Great Recession, embarks on a journey through the American West, living as a van-dwelling modern-day nomad.

It would be difficult to not hear Nomadland's name everywhere during this year's award season - it has scooped up almost every award that counts. But is it truly that good, or is it just another Oscar-bait created solely for the Hollywood palate that the general public will forget in a year?

It's best to think of Nomadland in terms of a moving portrait - a character study of very real people - rather than a straight-cut drama. It centres on Fern (Frances McDormand), a fictionalised temporary worker that travels around the US from gig to gig after her husband's death and losing everything in the recession. Along the way, she meets fellow American nomads who have built a community around their rootless lifestyle either through choice or necessity.

While Fern is a fictionalised person, she is an amalgamation of real experiences adapted from a nonfiction book, and most of the rest of the cast are real-life nomads. It's an interesting approach that can also be seen in the recently released Netflix drama Concrete Cowboy, where real-life urban riders make up the cast in a fictional story about a father and his son. They might interact with McDormand as her character, but other than that, they play themselves, entrusting their stories with phenomenal director Chloé Zhao. It's somewhat ironic that a Chinese-born filmmaker tackles such a US-specific topic, but her adaptive insights help to give the film universal appeal.

Beyond Zhao, McDormand is another vital cog in this artistic machinery, infusing a sad joy into her performance and quiet meandering. Fern is just trying to make the best with what she has and still find some level of contentedness in her life - a universal truth that we can all relate to. The soft strength of her persona shines throughout, and while sombre in tone, it leaves you happier rather than sadder when the credits roll.

Yet, despite all the beauty and striking cinematography, Nomadland also decries a broken capitalistic system, where the too-old-to-work are forced into low-paying jobs and live out the rest of their lives on meagre state pensions in banged-up vans. It's the antithesis to the American Dream, dressed up in the pretence of reliving the country's pioneering days (sans the Native American killing). Together Zhao and McDormand ensure that this message remains front and centre of the narrative, revealing the downsides of a nomadic lifestyle that those influencers of #vanlife won't share on their feeds.

Out of all the B-grade movies circulating on the Covid-19 cinematic circuit right now, Nomadland will be a breath of fresh air that will blow away some of those Netflix-binging cobwebs. Let it wash over you, engage your visual intellect - and at least you can say you've seen THAT Oscar movie this year.