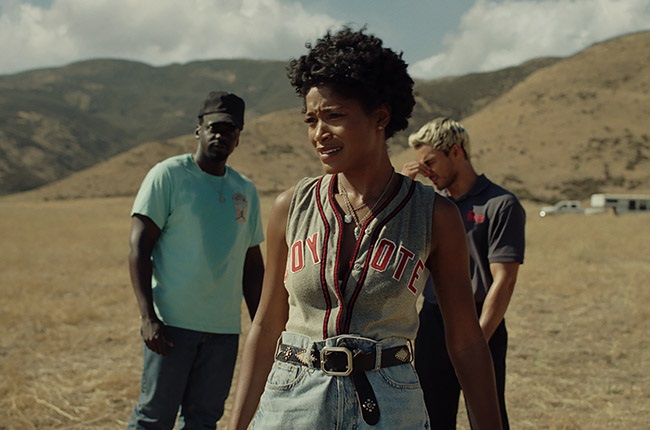 Two siblings running a horse ranch in California discover something wonderful and sinister in the skies above, while the owner of an adjacent theme park tries to profit from the mysterious, otherworldly phenomenon.

Jordan Peele's films almost always require a second or more viewing, and Nope is no different. Weeks after seeing the film, in a solo screening, I might add, interviewing the stars Daniel Kaluuya and Keke Palmer and attending a press conference with Peele, I still have many questions and theories about the film.

So far, it has made over $100 million at the US box office; Peele said during the conference that the reward for him is watching the conversation and then watching people take a spectrum of ideas from it.

Set on a Southern California horse ranch, it follows siblings OJ (Kaluuya) and Emerald (Palmer). Following the death of their father due to a mysterious event, the two try to keep the ranch and their business - animal wrangling for film and television - afloat. The pair soon realise that something isn't right up in the skies, and with the help of a tech assistant Angel (Brandon Perea), they set up surveillance to track the UFO in hopes of getting the money shot. Meanwhile, their neighbour Jupe (Steven Yeun), a former child star with a tragic past, has found a way to exploit the flying saucer ending in disaster.

Telling the story from the character's perspective, the viewer is with them step by step as they uncover what the object really is. Peele further aids the viewer by using title cards for each act and separating the storylines, which ultimately connects in the final act and the big reveal. It's a rollercoaster ride that keeps you at the edge of your seat; even without any big jump scares, the final act is impactful.

The emotional core of the film is the siblings OJ and Emerald. Where OJ is quiet and reflective, Emerald is the total opposite. Kaluuya and Palmer play off each other well and are the story's anchor. Kaluuya's ability to bring a character to life with little dialogue through a facial expression, a look in the eye and stillness is impressive. Palmer, on the other hand, balances it quite well with the extroverted Emerald. The character is the perfect embodiment of a generation driven by social media viral status.

Nope is a genre-bending film employing horror, science fiction and a touch of psychological thriller to drive its themes which include the erasure of Black people from Hollywood's history, the exploitation of child stars, the treatment of animals in the film and television industry, and our addiction to spectacle.

During the press conference, the Academy Award winner said: "I wanted people to come to see the film, and I wanted as many people to see whatever truth I was going to try to root out. And in the process of writing the story and trying to root out some truth and look no further than the fact, I had declared spectacle and this addiction of my own to achieve this impossibility. And to ask what that's about and ask why? Why I'm addicted to spectacle, as well as the rest of the world?"

Peele has indeed created a spectacle that is both entertaining and thought-provoking. I would advise watching it with somebody, as it will definitely spark conversation.

Nope is now showing in cinemas.

We live in a world where facts and fiction get blurred
In times of uncertainty you need journalism you can trust. For 14 free days, you can have access to a world of in-depth analyses, investigative journalism, top opinions and a range of features. Journalism strengthens democracy. Invest in the future today. Thereafter you will be billed R75 per month. You can cancel anytime and if you cancel within 14 days you won't be billed.
Subscribe to News24
Next on Life
Day Shift