The true story of Sergio Vieira de Mello, a celebrated, idealistic UN envoy who we meet badly injured and trapped under what remains of the UN embassy in Iraq after an attack by Al- Qaeda terrorists levelled the entire building. As Sergio fights for his life, we flashback to the events leading to this point – most notably his passionate romance with a fellow UN official, Carolina Larriera.

Considering that director Greg Barker has made a career out of producing documentaries for both the big and the small screen, it's ironic that Sergio, his first dramatic feature, seems so uninterested in really digging into its subject. This is all the more odd when you consider that Sergio is actually a dramatisation of his own documentary of the same name! It even uses the same framing device of telling Sergio Vieira de Mello's story in the context of his fight for survival after a deadly terrorist attack.

Perhaps Barker just assumes that if people want an in-depth look at the life story of this UN mega-star, his documentary is easily available  - on Netflix right now, in fact, as I found out shortly before writing this review – so he decided to create something a bit more impressionistic and a whole lot more purely romantic. It makes sense, in a way. Just redoing the documentary but with actors in place of real people would be a pretty obvious waste of time. Why not go for something completely different?

The answer, unfortunately, is because all the good intentions in the world (and everything about this film is steeped in good intentions) don't always produce the most compelling results. Sergio certainly has a number of things to recommend about it, and it's certainly watchable all the way through, but it is, ultimately, a frustrating and surprisingly empty piece of work. "Impressionistic" and "romantic" are two very fine modes for films to work in, but they're really not a very good fit for the story being told here.

In terms of the former, this is the inevitable result of the sort of flashback structure that the film very liberally employs. Rather than framing a chronological telling of Sergio's life in the events of the "present", Barker and screenwriter, Craig Borten, have opted to create something of a Russian nesting doll of flashbacks within flashbacks that are, in turn, intercut with the slightly more surreal visions of a man on the brink of death. It's a structure that worked brilliantly for 127 Hours, but it really doesn't here.

The most obvious difference between the Sergio and the formally similar 127 Hours is that the whole point of the latter are the events in the "present", whereas what we're really interested in here is Sergio's complicated personal life and his incredible work as an envoy for the United Nations, which are both set primarily in the "past" pretty much by definition. What this means is that the parts of the film dealing with Sergio's fight for survival are actually fairly monotonous and uninvolving, whereas the actual meat of the film feels bitty and inconsequential. And, to be honest, sometimes massively confusing in terms of figuring just where the hell you are in the story.

Yes, we get glimpses of the important work he did for the UN in places like Iraq and Cambodia but those glimpses never really coalesce into a clear picture. And, however much we may get a few glimpses into who Sergio is a person as we see his idealism matched by a potentially fatal arrogance and a life dedicated to the betterment of others that comes at the cost of his own family, they never feel like anything more than glimpses.

Where the film does come alive, oddly enough, is when it moves away from the politics, Sergio's life's work and his battle for his life under the most horrific of circumstances, and focuses instead on the romance between Sergio and Carolina Larriera, played by Narcos' Wagner Moura and Knives Out's Ana de Armas, respectively. This particular romance may have been of great importance to Sergio in the months before the terrorist attack, but it seems a strange thing to spend so much time on in what is ostensibly a biopic about a fairly extraordinary life.

And yet, it works, and it works because this is clearly the film that Barker and Borten wanted to make all along. Barker already did the probing documentary, and Borten has already spent his time buried under rubble in The 33, the true-life story of the thirty-three miners who were trapped under a collapsed mine in Chile in 2010 for sixty-nine days, so it's hardly a stretch to imagine that they wanted to go in a notably different direction. Quite why they didn't just create a romantic drama instead, though, is just one of the many perplexing decisions made in the creation of this film.

Mind you, a large part of the reason why the romantic sub-plot is as effective as it is, is less about the writing (which is, frankly speaking, pretty bland throughout) or even really the directing but in the sensual cinematography of Checco Varese and in the undeniable chemistry between Moura and de Armas. De Armas brings plenty of sex appeal and real passion to the film, which isn't exactly surprising if you've seen her in, well, anything, and she makes the best of a fairly underwritten character, and it is in her presence – far more than when he is "on the job" – that Moura's Sergio really comes to life. He is charismatic throughout but, like so much else in the film, he only ever seems fully engaged when interacting with his leading lady. It's hard to blame him but, again, how does any of this serve the noble but complicated story of Sergio Vieira de Mello?

Incidentally, talking of the chemistry between the film's two leads, there is a fairly lengthy sex scene between them that may be shot with tastefully dim lighting but is surely more than explicit enough to earn the film a higher rating than the 13+ age-restriction given to it by Netflix (or the South African Film and Publication Board, whatever the case may be)? And that's before getting to some of the tougher violence in the film that may be discreet but is, in one instance at least, pretty upsetting. I can't imagine many younger teens or tweens wanting to watch this particular story but parents beware: this isn't one for the kids.

Sadly, despite its noble intentions and attractive leads, it's not really one for the adults either. Maybe give the documentary a try?

Share
Next on Channel24
Mission Control: The Unsung Heroes of Apollo 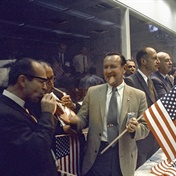