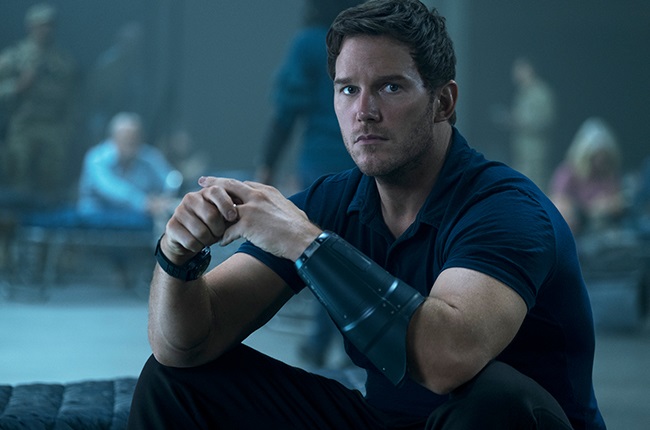 Time travelers arrive from 2051 to deliver an urgent message: 30 years in the future mankind is losing a war against a deadly alien species. The only hope for survival is for soldiers and civilians to be transported to the future and join the fight. Determind to save the world for his daughter, Dan Forester teams up with a brilliant scientist and his estranged father to rewrite the planet's fate.

Time travel, alien invasions and the bond between a father and their child - The Tomorrow War is a mish-mash of sci-fi elements that got squashed unceremoniously together to create something almost new, yet still common at the same time.

Yet, it gets a breath of new air in its third act, finally getting you to sit up and start thinking about the mechanics of its story, wrapping up many questions that you initially thought would be left unanswered. Up until then, unfortunately, you have to schlock your way through a myriad of hackneyed Chris Pratt performances, pseudo-science rambles and monsters born from an unimaginative void.

As a concept, The Tomorrow War is unique by today's standards. Civilians are recruited in the past to fight off an alien invasion in the near future as human numbers have dwindled to extinction levels. One super convenient man - father, scientist and ex-military - becomes the key to saving the human race, but what is he willing to sacrifice to do it?

Like any sci-fi movie, the mechanics of its science needs to be fleshed out so that the audience can suspend their disbelief just enough to follow the story's logic. While The Tomorrow War explains this to some extent, it's done so rushed and unnaturally that it constantly takes you out of the moment as you try to figure out what it all means.

Also, the film felt like it had two endings - the first a cliched anti-climax that you saw coming a mile away, and I was a bit taken aback when the movie actually continued past this. And suddenly, the writer was jerked awake from his trance in the first two acts, and he gave us a great final act, filled with suspense and eureka moments where you finally put two-and-two together. Right until the end, you weren't exactly sure where this was going, but suddenly you become invested in the characters, which should have been the case right from the beginning.

As Covid-19 continues to plague the cinema industry and thrust streaming into the stratosphere of entertainment consumption, The Tomorrow War is another example of a blockbuster explosions movie created for the vast canvas and surround sound of a big cinema, reduced to the uninspiring limitations of a small screen.

This film was less about science and more about the action and explosions, which, to be fair, was quite spectacular, with a few stunning cinematography moments - people falling out of the sky into a burning city, monsters swarming a base in the middle of the ocean, desolate snow landscapes where hunters are being hunted. There was a level of artistry in this, robbed of its splendour on Amazon's screen.

As for the acting, Pratt has lost a lot of his shine for me over the years. Without the jokes - of which there is none in The Tomorrow War - Pratt just becomes an interchangeable pretty face in a role that anyone could've played, and it would still have the same outcome. I don't even think his name alone has the same draw it once did after the success of The Guardians of the Galaxy, and these joke-less action films are nothing more than paychecks to him.

The rest of the cast were pretty forgettable, even wasting JK Simmons' talents as an absent father, except for the one shining performance from Yvonne Strahovski (The Handmaid's Tale, Chuck). Unfortunately, I can't delve too much into her character due to spoilers, but know that she brought her A-game to the role despite the writing she had to contend with. She remoulded a wooden female character purely existing for the character development of the male lead and gave her daring agency and actual emotional depth.

The Tomorrow War is not a big thinker, but it's a film created pre-Covid for the thrill of the cinema and instead got regaled to the bleachers only to make its debut in the small leagues. If it wasn't for the saving grace of the final act, it would have been a bomb of a film. But if you're in the mood for sci-fi and action spectacle, this might just make you feel like you're back in the cinemas again.