Dolly Parton, Songteller: My Life in Lyrics | The story behind Dolly Parton’s 9 to 5 and why she credits her nails Dolly Parton, Jane Fonda and Lily Tomlin at the film premiere of 9 to 5 in New York on 5 December 1980. (Photo: Tom Wargacki/WireImage)

Dolly Parton, Songteller: My Life in Lyrics is a landmark celebration of the remarkable life and career of a country music and pop culture legend. As told by Dolly Parton in her own inimitable words, explore the songs that have defined her journey. Illustrated throughout with previously unpublished images from Dolly Parton's personal and business archives.

Mining over 60 years of songwriting, Dolly Parton highlights 175 of her songs and brings readers behind the lyrics. The below extract is reprinted from Dolly Parton, Songteller: My Life in Lyrics with permission by Chronicle Books, 2020.

9 to 5 Brought Dolly’s songwriting to the top of the pop hit parade for the first time. It was also a No. 1 country and adult contemporary smash, won two Grammy Awards, and was nominated for an Oscar. The movie 9 to 5 subsequently became a TV sitcom (1982– 1988) with Dolly’s sister Rachel Dennison in the "Doralee Rhodes" role. Both Rachel and sister Freida Parton issued pop solo LPs in 1984. Freida wrote "Sing for the Common Man," the flip side of Dolly’s million-selling "9 to 5" single.

Tumble outta bed and I stumble to the kitchen

Pour myself a cup of ambition

And yawn and stretch and try to come to life.

Jump in the shower and the blood starts pumpin’

Out on the street the traffic starts jumpin’

Barely gettin’ by, it’s all takin’ and no givin’.

They just use your mind, and they never give you credit.

It’s enough to drive you crazy if you let it.

9 to 5, for service and devotion

You would think that I would deserve a fair promotion.

Want to move ahead, but the boss won’t seem to let me.

I swear sometimes that man is out to get me!

They let you dream just to watch ’em shatter.

You’re just a step on the boss-man’s ladder.

But you got dreams he’ll never take away.

You’re in the same boat with a lotta your friends

Waitin’ for the day your ship’ll come in

And the tide’s gonna turn, and it’s all gonna roll your way.

There’s a better life, and you dream about it, don’t you?

It’s a rich man’s game, no matter what they call it

And you spend your life puttin’ money in his wallet.

There’s a better life, and you think about it, don’t you?

It’s a rich man’s game, no matter what they call it

And you spend your life puttin’ money in his wallet.

A HANDWRITTEN NOTE BY DOLLY PARTON: 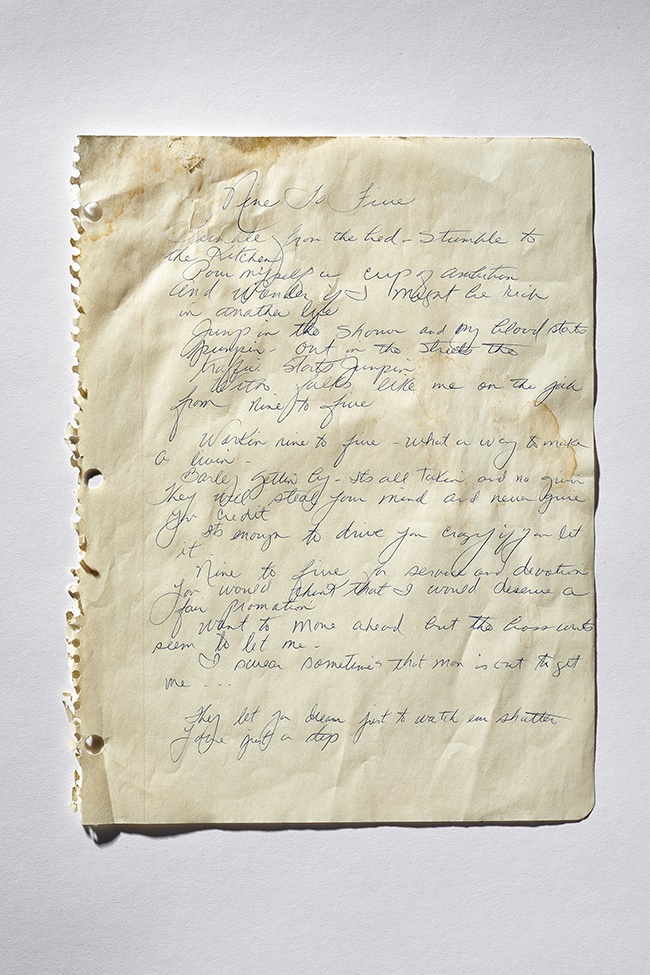 9 to 5 handwritten lyrics. (Image from: Dolly Parton, Songteller: My Life in Lyrics with permission by Chronicle Books, 2020)

Lily and Jane were very helpful. Jane is the one who got me in the movie. She was thinking, “Dolly will get us the South.” I told her later as a joke, “Well, I might get you some North and East and West, too,” because I had a lot of fans. I memorized the whole script. They thought that was the funniest thing they’d ever heard. But it helped them, because I was feeding them lines when they didn’t remember theirs.

Jane said, “Don’t worry about acting. Just be yourself. The director will tell you what to do, and you’ll learn.” Dabney Coleman [who played “Mr. Hart”] taught me a lot, too. He’s a Texas guy, and we had a great connection. They all knew it was my first time in the movies, so they were all helpful. People are generous.

The thing I hate about the movies is all the waiting-around time. I realized early on that I had to do something besides just sitting there or going to the crafts [food] table. I did that and gained weight. Jane gave me good advice, so I said to myself, “Dolly, you’ve got to stop eating. They do scenes out of sequence, and you can’t go in the door slim and come out fat. You’ve got to watch what you’re doing.”

So I spent my time watching everything, just soaking everything up like a sponge. I couldn’t play my guitar; I didn’t want to disrupt everything on the set by making music and attracting attention when other people were trying to work. So I would just take my nails and make them sound like a typewriter. Off by myself, I would click my nails and use that sound as my music.

I wrote “9 to 5” in my head that way. I’d go back to my hotel at night and put down what I had written that day, playing my guitar and getting it on tape. Over a long period of time, I wrote the song on my nails. I’m famous for that now. Every time I go on TV, I have to “play” my nails like a typewriter. Dolly Parton, Songteller: My Life in Lyrics cover.
We live in a world where facts and fiction get blurred
In times of uncertainty you need journalism you can trust. For 14 free days, you can have access to a world of in-depth analyses, investigative journalism, top opinions and a range of features. Journalism strengthens democracy. Invest in the future today. Thereafter you will be billed R75 per month. You can cancel anytime and if you cancel within 14 days you won't be billed.
Subscribe to News24
Related Links
The unlikely story of how Dolly Parton helped to fund the Moderna Covid-19 vaccine
Dolly Parton: Here I Am
Dolly Parton calls working with Joseph Shabalala 'one of the greatest joys' of her life
Next on Channel24
Vulnerable, carnal and ever the charmer, Harry Styles returns with new album